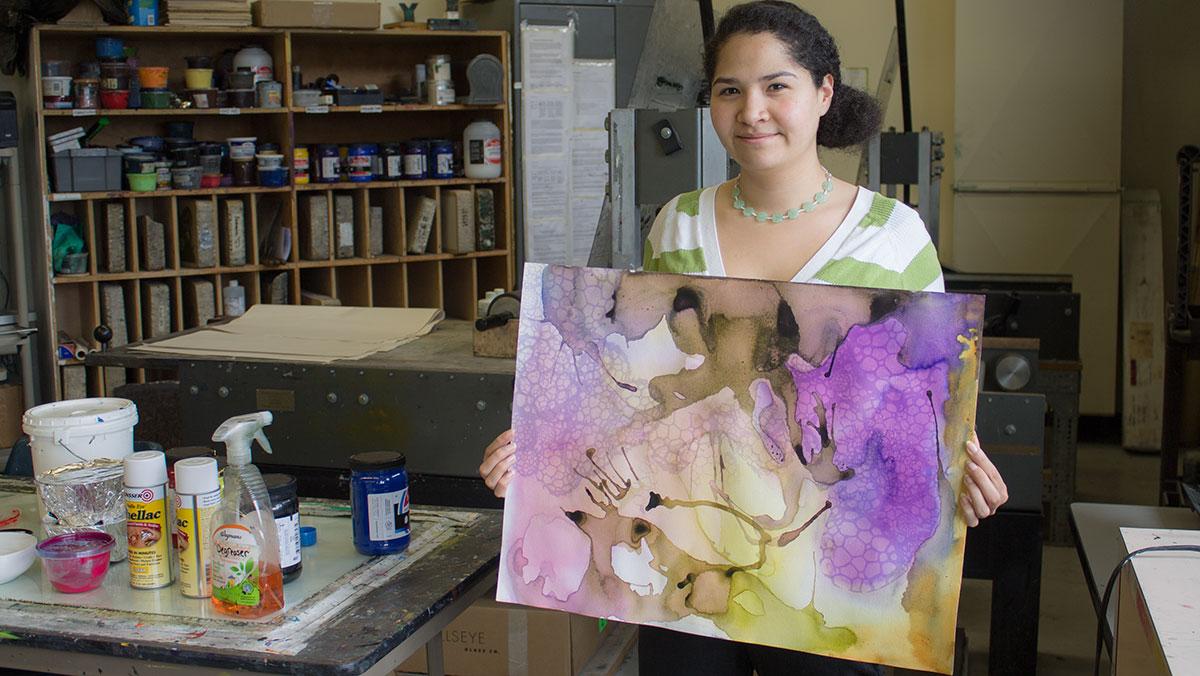 Connor Lange/The Ithacan
Senior Andrea Aguirre poses with an art of the piece that combines watercolor and printmaking, and will hang with the other Bachelor of Fine Arts students’ capstone portfolios in the Handwerker Gallery starting April 28. Aguirre combines her many interests and personality traits through her art.
By Maura Aleardi — Staff Writer
Published: April 11, 2016

Color palette at hand and a blank canvas awaiting her paintbrush, Ithaca College senior Andrea Aguirre adds watercolor to the paper in no particular order, an unfamiliar technique for this science-fiction–inspired, double-major military veteran.

“Trying to manipulate something that doesn’t like to be controlled and then trying to control it is pretty much the entire basis of my project,” Aguirre said. “It’s a personal thing, but I also think it’s just nature in general.”

Aguirre said controlling aspects of her life has worked both to her advantage and disadvantage. She has found a way to pursue her passion for the military, art and science, all before the age of 25.

She spent time training in the military until a foot injury prompted her to go back to school, where she double majored in Spanish and art. At the college, Aguirre had the opportunity to explore her scientific and artistic interests as a Summer Scholar at the college’s Creative Space Gallery downtown. She curated the museum, installed and created exhibits, and said she has learned to be freer both as an artist and human being.

The project Aguirre is working on now combines watercolor with printmaking and will hang with the other Bachelor of Fine Arts students’ capstone portfolios in the Handwerker Gallery from April 28 until graduation. She said this project challenges her need for precision and control, as she combines abstract watercolor paintings with chaotic prints. In the past, she said this control has restricted her from truly enjoying art.

“I didn’t play with my art like you do when you’re a kid; you make stuff, and you don’t care how it comes out,” Aguirre said.

As a Mexican-American, Aguirre grew up with Spanish-speaking family members but didn’t learn the language until age 12, when she and her family lived in Spain for three years. After being placed in a Spanish school, she was forced to learn the language and was fascinated by the new relationship she found with her Spanish-speaking grandparents, deciding eventually to make it a major, she said.

But this double major almost didn’t happen. In high school, Aguirre wanted to follow her father and sister’s steps and join the military. As a military child, Aguirre said, she had little control over her life, never living in one place for more than three years.

After a year of preparatory school at the U.S. Military Academy at West Point, New York, Aguirre injured her foot and left the military to pursue her career in art. Her older sister, Crystal, has witnessed Aguirre grow up and has seen her personality change. She said she is now glad to see Aguirre pursuing her true calling.

“She’s always loved doing art,” Crystal said. “That’s why I couldn’t imagine her being in the military because she was doing so great with her artwork.”

Aguirre said she can relate her final project to the uncertainty and chaos that comes with graduating and that she experienced as a child. She said people, including herself, often try to control what they can’t. This is one of Aguirre’s biggest struggles as an artist, Dara Engler, assistant professor of art, said.

“She went through phases of being in her own head too much and overthinking things and letting that halt her progress,” Engler said. “She worked through it, which is what gives me confidence in her as an artist.”

During her summer project at the gallery, Aguirre combined her passion for art with her love for math, science and learning how the earth functions. Her project featured a post-apocalyptic world of bioluminescent creatures. Aguirre said she appreciates her ability to instill a sense of fiction and imagination in her viewers.

“You can create these worlds for people to immerse themselves,” Aguirre said.

As Aguirre continues making art, she said, she will never stop craving knowledge.