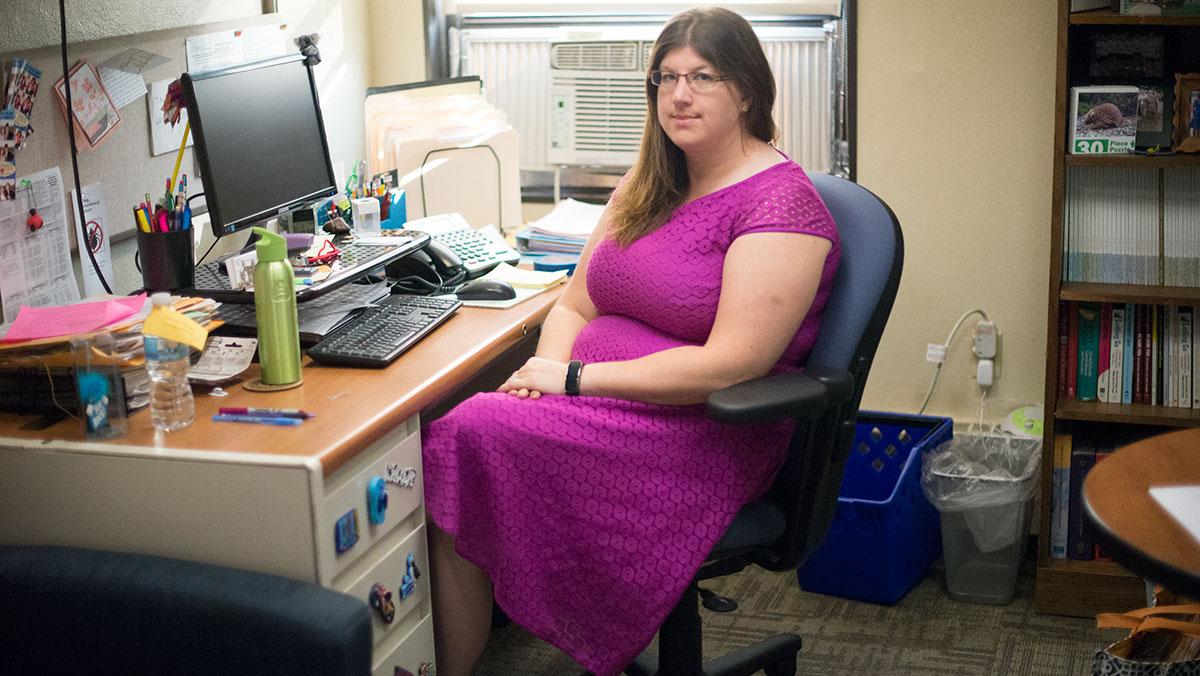 Tommy Battistelli/ The Ithacan
Tiffani Ziemann, Title IX coordinator for the college, pictured in her office in Terrace 7. Ziemann said one of the goals for the SHARE program is to expand its impact on campus.
By Jessica Ferreira — Contributing Writer
Published: September 9, 2015

In its second year, the Sexual Harassment and Assault Response and Education program at Ithaca College is focusing on bystander intervention education, updating self-defense courses to be more inclusive and heightening the program’s presence on campus.

The SHARE program was created in response to new federal legislation involving Title IX. Tiffani Ziemann, Title IX coordinator at the college, is responsible for overseeing all reports of sexual assault, harassment and issues involving discrimination on campus, as well as overseeing all training and education around issues of assault.

“This year we’ve tried to update our focus during orientation to be compliant to the expectations from federal government, and now we’re starting to adapt to New York state laws within ‘Enough is Enough,’” Ziemann said.

Enough is Enough was signed into law by Gov. Andrew Cuomo on July 7, and it requires colleges to teach students the concept of affirmative consent, as well as allow amnesty for students who report cases of sexual misconduct. The laws also require increased presence of law enforcement on college campuses.

This summer marks the first freshman orientations in which bystander intervention was a direct focus. Andrew Kosinuk, crime prevention and community events liaison of the Office of Public Safety and Emergency Management, said in the future Public Safety aims to have trained peers teach about bystander intervention. The goal of this newer approach is to make the lesson more comfortable and relatable for students, rather than being taught by a faculty member, he said.

Kosinuk said the whole community needs to be involved with preventing sexual assault and harassment.

“From the Public Safety end, bystander intervention is a big emphasis for us,” Kosinuk said. “It is very important to the department that students that are victims of sexual harassment or assault do not ever feel alone or responsible for what has happened. We want kind of a spirit of shared commitment and the community looking out for each other.”

Freshman Emma McLiverty said at orientation she learned who to talk to if anything happened to her or someone else.

“I don’t know if I learned anything new, but I guess just how to approach any problems on this campus specifically,” McLiverty said.

Freshman Derek Howes said he thought the SHARE program was not as in-depth as the sexual assault education programs at the colleges his other friends were attending and that the program “did somewhat of its job.”

“They could add some online stuff like they did with AlcoholEdu,” Howes said.

McLiverty also said she would like to see the program present at more activities, as she had only seen or heard of SHARE at orientation.

Ziemann said the program is working to expand its reach beyond the freshmen who attended orientation. She said this includes involving athletes and giving them training that fits their lifestyles, as well as reaching out to other student organizations besides Feminists United and the Student Government Association, which are already actively involved with SHARE.

When asked if the SHARE program had tried communicating with upperclassmen, senior Trevor LaRose said, “No, at least not effectively.”

Senior Gabrielle Haff had not heard anything about SHARE’s goals to focus on bystander intervention either.

“I’ve had some organizations come to classes at the beginning two minutes,” Haff said. “Maybe if they picked the classes with a lot of students, it may help to at least get the word out.”

Furthermore, Public Safety is looking to incorporate more self-defense courses that are all–inclusive. This is in response to a recent commentary on the Rape Aggression Defense course that took place this past July. The RAD program has been criticized by the SGA, Feminists United and Spectrum for not being all–inclusive. The program was only offered to women, excluding men, transgender women and those who identify as genderfluid.

“We’ll make sure that anybody who feels like they would be empowered by that kind of training has access to it,” Kosinuk said.

Terri Stewart, director of Public Safety, could not be reached for comment.

Sophomore Yena Seo, SGA vice president of campus affairs, said the SGA believes SHARE could improve through having a stronger presence on campus, as well as becoming more inclusive of underrepresented genders, sexualities and ethnicities.

“They really have to be inclusive of certain groups that may experience a higher likelihood of being victims of sexual assault and harassment,” Seo said.

Luca Maurer, program director of the Center for LGBT Education, Outreach and Services, fosters personal and academic growth for lesbian, gay, bisexual and transgender students, and provides opportunities to educate the campus on LGBT issues and themes. Maurer said the Advocacy Center at the college is a part of SHARE and works very closely with his office, although he was not consulted about the RAD program. Maurer also said he had seen the recent student commentary about the RAD program and believes students were spot–on with their concerns and criticisms.

“I would hope that we would all move forward together collaboratively to make sure that all of that important information goes out and is provided in a way that is inclusive of everyone,” Maurer said.

Maurer also said specific initiatives, such as RAD, should become all–inclusive and recognize data about who is most at risk of sexual harassment and assault on college campuses.

Seo suggested that the program survey students to see how they feel about SHARE and its treatment of assault and to also look into trends on campus involving sexual assault.

Ziemann said marketing and getting the program recognized by more students is a priority. In order to help make students aware of this resource, particularly the SHARE website, Ziemann said resident assistants have been asked to put magnets branding the website in student rooms, and the program is working to develop posters that will be distributed across campus.

Kosinuk said the ultimate goal is to make the college’s campus a safe place for everyone.

“Really it’s about doing right by your students,” Kosinuk said. “The people have a right to feel safe and comfortable on campus, and I think that SHARE is a big contributor to that, and hopefully even bigger in the future.”