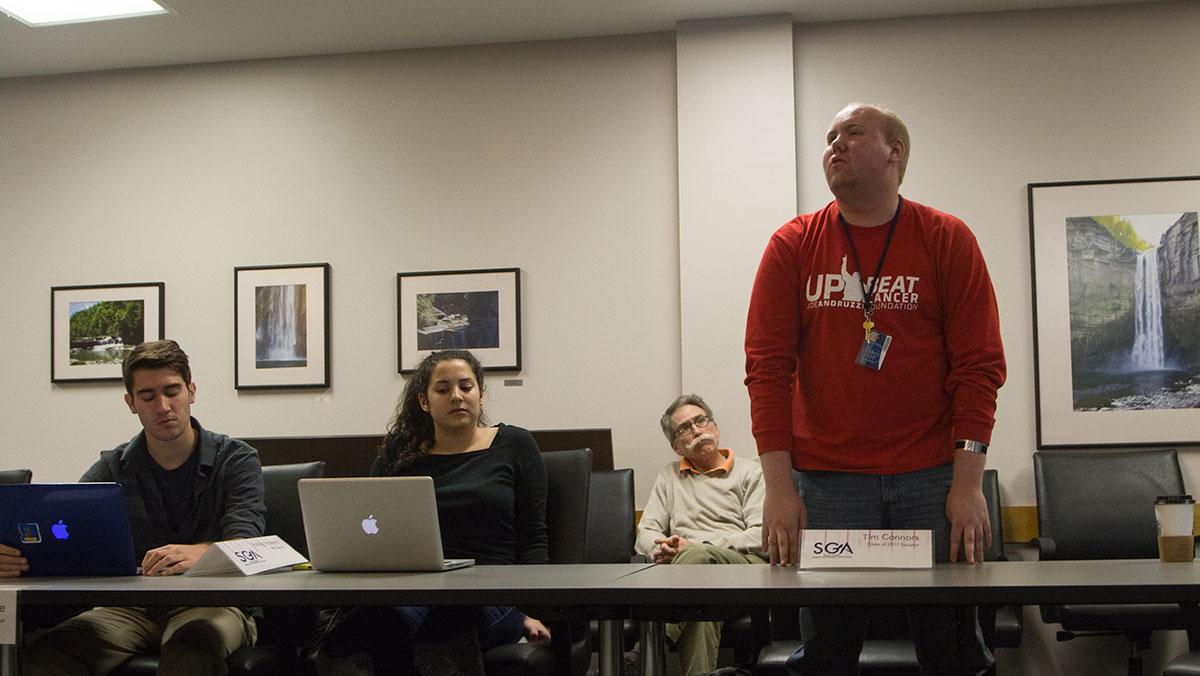 Justin Henry/The Ithacan
Tim Conners, senator for the Class of 2017, proposed the Tobacco Free IC bill at the Student Government Association's May 2 meeting. The senate also passed four other bills at the meeting, marking the highest number of bills passed at a meeting this semester.
By Justin Henry — Staff Writer
Published: May 4, 2016

The Ithaca College Student Government Association Senate passed a wide-reaching set of five bills at its final meeting May 2, marking the highest number of bills passed at a meeting this semester.

At the May 2 meeting, the Senate passed two bills whose sponsors say are consistent with the SGA’s efforts to reclaim environmental sustainability as an issue the college takes seriously. One bill would make the college campus tobacco-free, and the other bill would establish a fund for research and projects dedicated to “environmental betterment.” The Senate passed three other bills — one to extend the Tompkins Consolidated Area Transit’s Sunday hours, one to form a committee to inform the students of healthy food options in the dining halls and one that would form a committee tasked with negotiating the extension of Sodexo’s Grab and Go hours.

Tim Conners, senator for the Class of 2017, proposed the Tobacco Free IC bill, which resolves to create a committee to eventually write a policy that bans the use of tobacco on the college campus by Jan. 1, 2018. The bill passed through the Senate on a 6–2 vote.

The bill was previously voted down at the April 4 meeting, when SGA members said the bill did not include assistance for smokers to quit and did not give clear parameters for enforcement of the policy. Conners responded to criticisms by revising the bill to include a clause that states the Hammond Health Center should provide counseling to help smokers quit. Additionally, he added a clause that states the policy’s enforcement is contingent upon the entire campus community’s participation.

“The idea is to create an environment on campus where basically it’s kind of the cultural norm on campus that smoking isn’t the thing to be doing,” Conners said. “Anyone in the community has the right to say, ‘You know, you’re really not supposed to be smoking.’”

After the bill passed, Conners said he would speak with on-campus health care providers as well as staff and students during the remaining days in the current spring semester to solicit feedback on how to best draft a policy. At the beginning of the Fall 2016 semester, he said, he will start assembling a committee to draft the policy.

To continue the SGA’s renewed support of initiatives to make the campus more environmentally conscious, SGA President Dominick Recckio proposed the Green Fund bill. The bill tasks the Committee on Environmental Betterment, established by a bill passed at the April 18 meeting, to oversee a “green fund” to allocate money for environmental sustainability research initiatives and other projects in which interested campus community members would participate. The bill unanimously passed through the Senate.

Ben Tolles, a senior environmental studies major and a working group member, said the bill’s sustainability initiatives to save water and other utilities could save the college money, which would then be reinvested in the green budget to fund more initiatives. The working group plans to bring these proposals to the Ithaca College Board of Trustees during the Fall 2016 semester.

“We want to … show them sustainability can be an economic decision,” Tolles said. “It doesn’t have to cost money. That’s the kind of language trustees typically operate on because that’s their job.”

“Many students go downtown for meeting families,” Mendli said. “Others who live off campus — they have to come so they can study and do group projects on, like, afternoons and evenings on Sundays.”

He said he would present the SGA’s support of the initiative at the next TCAT board meeting May 12.

Mendli also proposed the “Sodexo Healthy Food Initiative,” a bill that resolves to form a committee to address an allegedly insufficient amount of vegan, vegetarian, organic and healthy food options in the dining halls. The bill would also require the committee to inform the student body of healthy food options in the dining halls. Mendli’s “Grab and Go” bill moves to create a committee tasked with addressing a student concern of the limited hours and locations of Sodexo’s Grab and Go service. Mendli suggested the Grab and Go service be moved back to the Campus Center.

Senator–at-large Ezeka Allen said she was critical of Mendli for not creating committees for either bills. However, in a previous Q&A with The Ithacan, Marieme Foote, former Senate chair and recently elected student body president, said committees would form at the beginning of the Fall 2016 semester, composed of experienced senators, to carry out the initiatives proposed by the bills. During the Spring 2016 semester, the SGA had seen a considerable drop in bills passed through the Senate from the Fall 2015 semester, but Foote says the new Senate will address this.