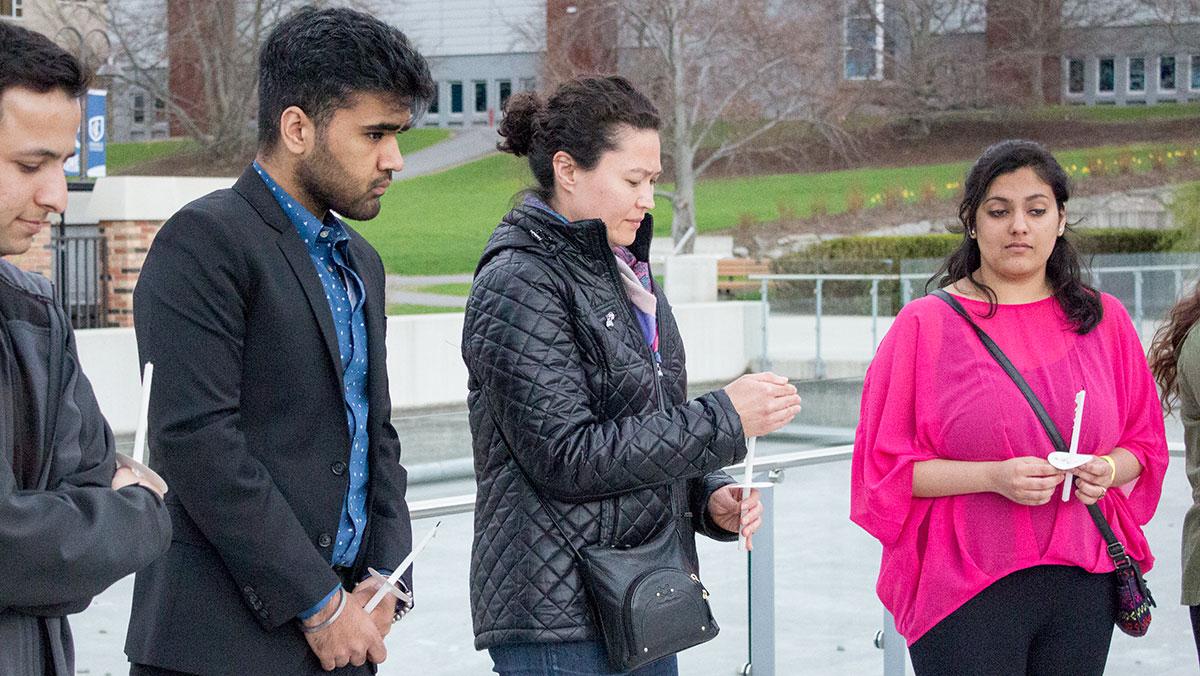 The flames danced and died in quick succession as the wind whipped back and forth, but the 25 students and few faculty members who gathered at a candlelight vigil for the country of Nepal, which was recently wracked by a devastating earthquake, patiently lit the candles again, persevering until the wind receded.

The quake, which registered at a 7.8 magnitude on the Richter Scale, struck Nepal April 25. According to a May 1 article by The Guardian, the death toll has reached 6,260, with about 14,000 injured and thousands still unaccounted for. The Guardian also reported up to 90 percent of clinics and schools in some districts have been rendered unusable by the disaster.

Since the earthquake struck, relief efforts have been underway, with groups across the world organizing campaigns to help the country recover from the disaster.

The Ithaca College vigil, which was held the evening of May 1 by the fountains outside of the Dillingham Center, was part of an effort by a group of students to raise awareness about the plight of the Nepalese people. During the approximately half-hour event, participants gathered in a circle and lit candles in a show of support for the people of Nepal. Following the lighting of the candles, freshman Anushka Rajbhandari, an international student from Nepal, recited a prayer for the victims of the tragedy, as well as the people still recovering from its impacts.

After the prayer, attendees were invited to speak. Many told stories of the heroism of the people of Nepal in the face of the earthquake’s effects. Others expressed their thanks for the support provided by those who attended the vigil, which was organized by Nepalese students at the college in conjunction with the South Asian Students Society.

The vigil then culminated in a one-minute moment of silence to honor the victims of the earthquake and reflect on how best to help Nepal recover.

The organizers of the vigil also invited those in attendance to donate money to aid in the disaster relief effort. A large banner, with pictures of the devastation caused by the quake, was hung and read “Help Nepal.” Below was a donation box with the phrase “$1=1 Life.”

One U.S. dollar is equal to 101.62 Rupee — Nepal’s currency system. Rajbhandari said the idea behind $1=1 Life is that a donation of $1 can provide people in Nepal with a substantial amount of food and water. Rajbhandari said even lesser donations can make a big difference.

“For a lot of people, 25 cents is not a big deal, but in that 25 cents, people in Nepal can buy water and noodles,” Rajbhandari said. “It’s awareness at the same time; if you don’t want that quarter, then you can just donate it.”

In addition to the fundraising efforts at the vigil, Girish Gyawali, a graduate student at the college who is originally from Nepal, said groups of students have been tabling in Campus Center since April 29 in an effort to raise money for Nepal. Gyawali said the group also collected donations at the IC Kicks Back event, which took place on the same day as the vigil.

Following the completion of the vigil, and including the efforts throughout the week, Gyawali said $470 of funds had been raised. However, he said the table set up for fundraising efforts would be continuing until May 4.

Gyawali said the money will go to local non-governmental organizations in Nepal that are helping with disaster relief, although he said the specific NGOs the funds will be given to have not been chosen yet.

Gyawali said since he can’t physically be in Nepal, the vigil and the fundraising effort are his ways of helping the people in his country.

“It’s hard being away from home,” he said. “You wish you could be home and just help out your community and help out your parents … but we’ll do our best from our end.”

Sophomore Lima Hossain, who also participated in the fundraising effort throughout the week, said she was surprised with the response the fundraiser received from the Ithaca community.

“It just goes to show that no matter where everyone’s from, whatever background they’re from, we all just come together to give each other support and strength,” Hossain said. “And in times of need, that you have people that will be there to support you and hold you up.”

Freshman Anne Ling said she attended the vigil because she visited Nepal last summer, and the different way of life was an eye-opening experience for her.

Ling said she doesn’t think enough people in the Ithaca community understand the seriousness of the situation in Nepal.

“I think they are just aware of it, but they don’t really understand how big this thing is,” Ling said.

Namrata Ojha, a graduate student at the college who is from Nepal, said the vigil and the fundraising efforts are the students’ way of trying to minimize the impact and aftermath of the earthquake in any way they can.
“We have lost so many lives, and we don’t want anymore lives to be lost,” she said.