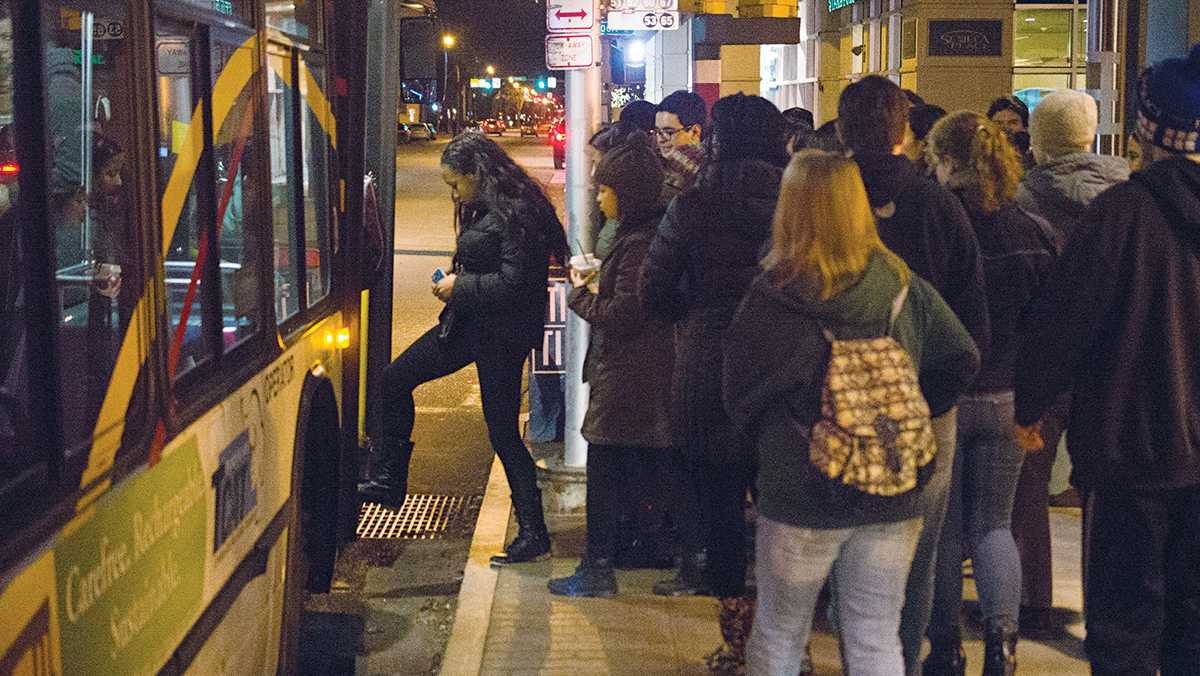 A crowd of students gathers at the Seneca Street Station. The air is filled with the scent of alcohol and a wisp of cigarette smoke. The Route 11 bus pulls up to the station. There is a mad rush for the bus, which fills rapidly. The windows begin to fog up.

The Route 11 regularly experiences a high demand for service on Friday and Saturday evenings. Sometimes — especially on holiday and event nights such as Halloween and Cortaca — students are left behind at the bus stops when the buses fill up close to and at capacity.

After the barrage of students at Seneca Street, more people try to get on at the Green Street Station.

“I need you to move back as far as you can,” the bus driver yells.

The bus pulls forward, and then the driver hits the brakes. The mass of students lurches forward. One man loses his balance and stumbles toward the driver. A woman repeatedly says “I’m not drunk! I’m just tired,” and then promptly tries to fall asleep standing up, resting her head and torso on a flat surface at the front of the bus. As the bus arrives on campus, the driver offers the woman’s boyfriend a vomit bag, conveniently located on a tear-off roll in the front. The boyfriend is informed that if there is vomit on the bus, it will be declared a biohazard and must be cleaned. 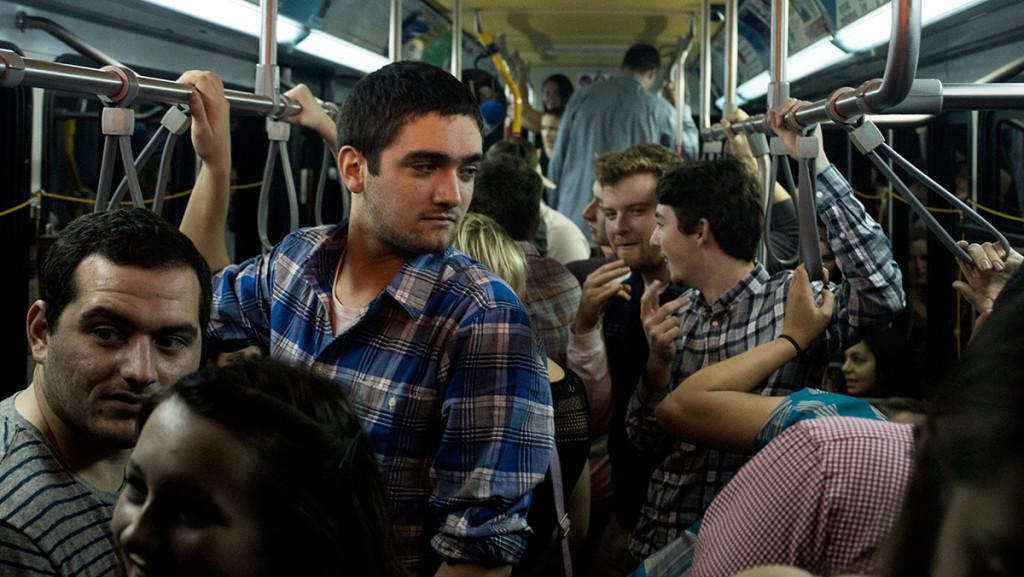 Students ride the TCAT the night of Nov. 6, 2015. Sometimes, over 100 people waiting to board at a time at a single bus stop. When there are more people waiting than can fit on the bus safely, the remaining people must wait for the next bus to arrive. Yana Mazurkevich/The Ithacan

Junior Juan Sanchez said when he road the heavily crowded buses during his freshman year, he didn’t feel safe.

“I’ve seen people miss their stops and, like, rush to get out the bus door as it’s closing, and that’s when really dangerous things can happen to yourself.”

Tompkins Consolidated Area Transit is one of the main transportation modes for students at Ithaca College, especially for partygoers on weekends. According to TCAT’s website, public buses have served the college for over 50 years. Ithaca Transit provided service to the college before TCAT, along with TOMTRAN, Tompkins County’s former bus service, and CU Transit, which was operated by Cornell University.

Two TCAT routes serve the college. Route 11, which is the main line between the college and The Commons, continues to Cornell University upon its return to downtown from South Hill as either Route 30, 70 or 90.

The second line that services the college is Route 65, a rural commuter route between Ithaca and Danby, which has a stop at Alumni Circle. That route only runs seven times each weekday, three times on Saturdays and not at all on Sundays.

Nancy Oltz, TCAT operations manager, said TCAT has taken steps to increase service to and from the college over the past few years. Supervisors have been out from 6 p.m. until 2 a.m. on Friday and Saturday nights to monitor conditions. Two years ago, night service on weekends was extended so buses would run every half hour, and a second bus was added to the 1:30 a.m. return trip to campus one year ago.

Oltz also said TCAT regularly sends a second backup bus between 10:36 p.m. and 11:36 p.m. on the runs from campus to downtown for overflow passengers. Similarly, a second bus is often recruited between 12:30 a.m. and 1:30 a.m. for trips back to campus. She said drivers are usually available and willing to accommodate these backup runs. 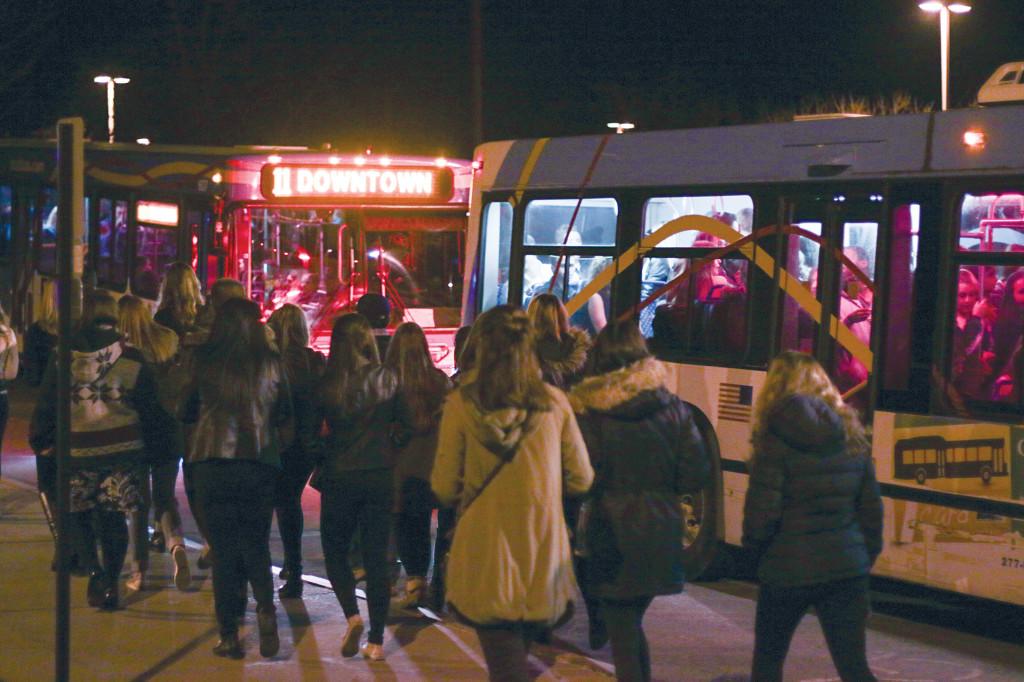 Two buses arrive the night of Feb. 6 at the bus stop outside of the Roy H. Park School of Communications to gather all of the students looking to travel downtown. Yana Mazurkevich/The Ithacan

Costs related to these backup runs have been absorbed by TCAT’s operations budget, Oltz said. The estimated annual cost to operate the Route 11 bus is $910,000, and each additional trip beyond those regularly scheduled would cost about $95, said Doug Swarts, service development manager at TCAT.

During six nights of observation between Oct. 30, 2015, and Feb. 6, backup buses were witnessed on the Route 11 three nights, including the night of Cortaca, the annual rivalry football game between Ithaca College and SUNY Cortland, on Nov. 14, 2015; Jan. 30; and Feb. 6. Additionally, students were left behind at bus stops due to the bus’s being full on three nights, including Oct. 30, 2015; Oct. 31, 2015, when a crowd of about 100 students was left at the Towers bus stop when the TCAT arrived from the Circle Apartments already full; and Jan. 30.

Patty Poist, communications and marketing manager for TCAT, said drivers are doing their best to control the number of passengers on the bus.

“Our bus operators do everything they can to make sure buses aren’t overcrowded, and we ask students to please listen to them when they say they cannot take additional passengers,” Poist said.

Sophomore Colby Daboul said he trusts the TCAT drivers to maintain safety on the buses.

Frank Howells, United Auto Workers Local 2300 zone chairman and TCAT bus driver, said it may be worth advertising when extra buses are running to reduce students’ urgency to get on the first bus they see. He said he is reasonably certain that late-night weekend buses to and from the college are sometimes running above capacity.

“What happens if something happens on that bus? How will all those people get out? It would be a marginal stampede,” Howells said.

Gary Ferguson, executive director of the Downtown Ithaca Alliance, said the DIA is interested in bringing more people from the hills into downtown and vice versa — including students.

“Creating a better transit corridor that connects Ithaca College with downtown is, in our estimation, a really important thing to do,” Ferguson said. “That means more buses, more frequency and more hours.”

Poist said increasing the frequency of the Route 11 runs on a permanent basis to address high demand is not a possibility.

“We truly wish we could add more service, but we are in a position now — with funding shortfalls as well as bus operator and maintenance team shortages — that we cannot possibly add more service at this time,” Poist said.

Ferguson said because the college is not one of TCAT’s three primary financial partners — Cornell, Tompkins County and the City of Ithaca — it may make progress in providing additional service to South Hill more difficult.

Gerald Hector, vice president of finance and administration, said any route changes would be brought about by a “data-driven decision.”

“It’s not a matter of just running the buses frequently like that,” Hector said. “That’s a cost to them.”

On Jan. 30, a large mass of students had gathered at the Towers bus stop. When the first bus showed up, the onslaught of students rushing onto the bus prevented the driver from closing the door. Freshman Reesa Hylton was one of about 20 unlucky riders-to-be who couldn’t fit on the bus.

“If you can’t fit on the bus, you’re going to wait for the next bus, and it’s like you’ve gotta chill and be more patient because it’s dangerous, and when people are drunk, they’re not careful,” Hylton said.

Hylton added she has been injured while trying to board a bus.

“I got elbowed in the face,” Hylton said. 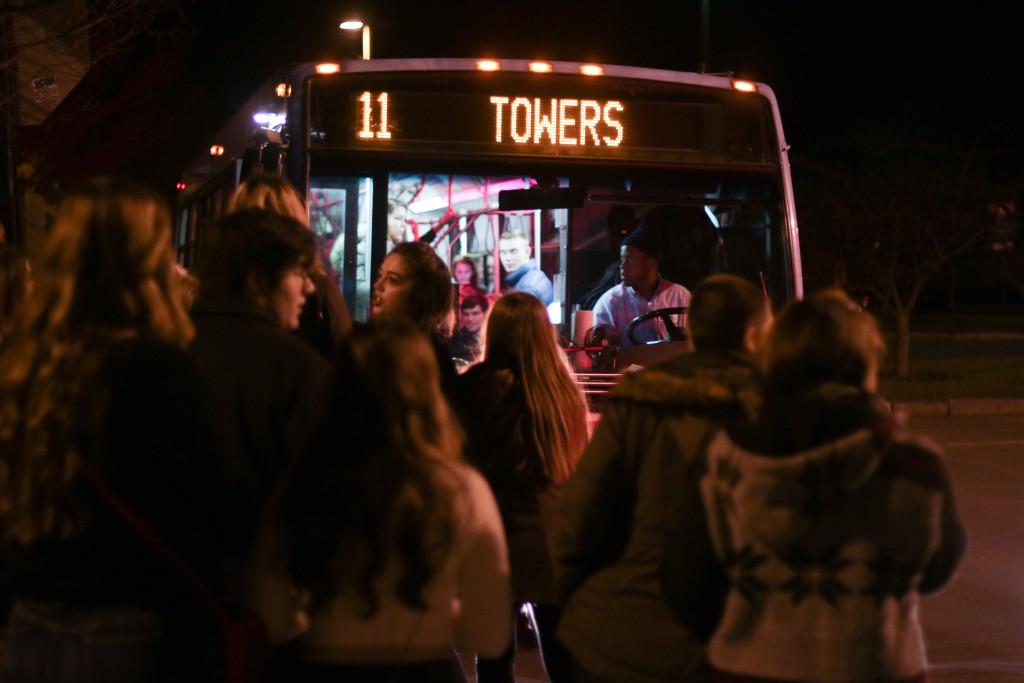 Oltz said TCAT has made efforts in recent years to increase service to Ithaca College during peak times on weekends. She said most of the time, additional drivers are available and willing to provide backup on Fridays and Saturdays, and the costs of the backup buses have been absorbed into TCAT’s operating budget. Yana Mazurkevich/The Ithacan

On Halloween Eve, as the TCAT approached the Towers bus stop, a group of over 100 people made a beeline for the door. The TCAT driver cut off the line, and a verbal altercation began between a woman and a TCAT supervisor, who allowed her and her four friends to board the bus.

About 50 people were left to wait for the next round as the bus departed the curb with a fluorescent orange message on the front: