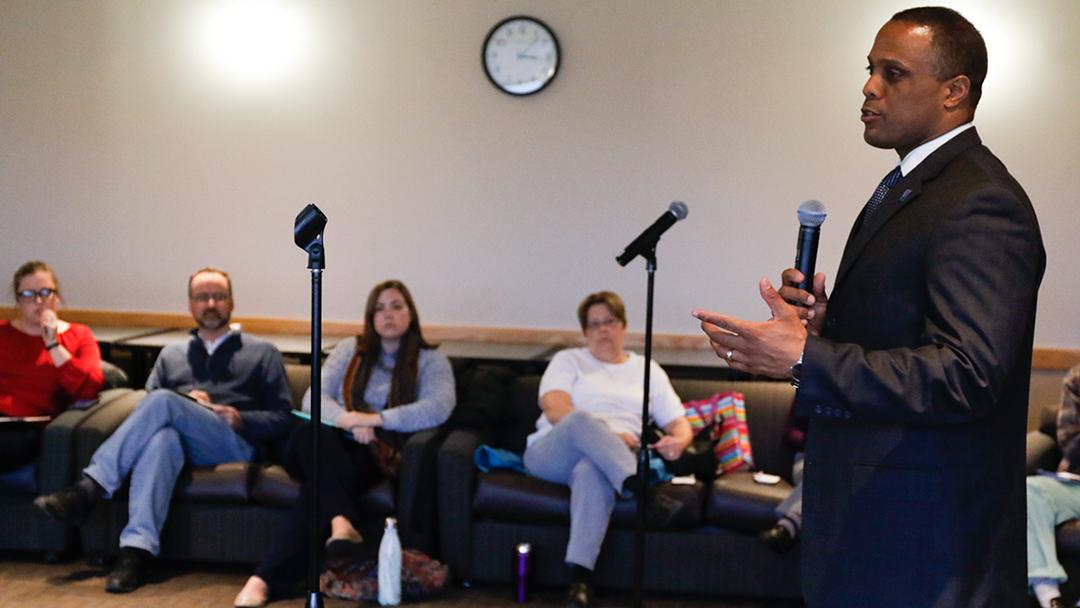 Gerald Hector, vice president of finance and administration at the college, hosted a dialogue Dec. 16 in Klingenstein Lounge to continue conversations about the racial climate on campus.

Hector decided to host the event after the “Demands Walk-out” held by POC at IC Dec. 11, which called for President Tom Rochon’s resignation. Following the walkout, Hector talked with over 30 students and listened to them express their grievances and demands regarding the racial climate on campus.

“It was clear from the discussions I was having right there on the spot that the students wanted to engage more — they wanted to talk more,” he said. “Oftentimes what happens, I believe, is that we say we need to get on the same page, but we don’t really stop to ask the question: ‘What is that page?’”

The event began with a screening of portions of “The Color of Fear,” a film featuring conversations between individuals of different races about racial tension. Four microphones were placed in the middle of a circle of approximately 40 faculty and administration members in attendance. Several individuals voiced concern about there only being one student in the room. Hector mentioned some people were concerned about the meeting being held during finals week.

Before the beginning of the film, Hector explained his personal reasons for holding the event, expressing his grievances about the campus community. He said although the South is often thought of as the area of the country that has issues with racism, the North is not free of racism either.

“I am a father of a freshman on this campus,” he said. “Coming from the South, one would think that you have seen and heard it all, but some of the things that have happened since coming here, you’d have never thought.”

Only a short clip of “The Color of Fear” was played, dedicating most of the evening to dialogue, during which the floor was open for discussion about anything related to race on campus and in the community.

Jeff Scott, general manager for dining services at the college, talked about his experience being accused of racism toward his staff.

“Good intentions are not going to get us a hall pass or a history here,” she said. “We can have really good intentions, but that’s not enough.”

Hector said when he moved to Ithaca, community members told him racial tension arises on campus about every 10 years. Dr. Roger Richardson, interim chief diversity officer and associate provost of diversity, inclusion, and engagement, echoed Hector’s statement by talking about his own experience on the administration at the college.

While Hector said there is much work to still be done, dialogue like the event he hosted needs to continue.

“One young lady raised an issue: If POC at IC hadn’t done what they went through with, would folks be wanting to talk about it?” Hector said. “I don’t know the answer to that. Nobody knows the answer. But at the end of the day, like right now, we are talking, and that’s the key thing: for us to at least start the dialogue, get some of the discussions placed in the context, continue to gather information from the campus at large and continue to move forward.”