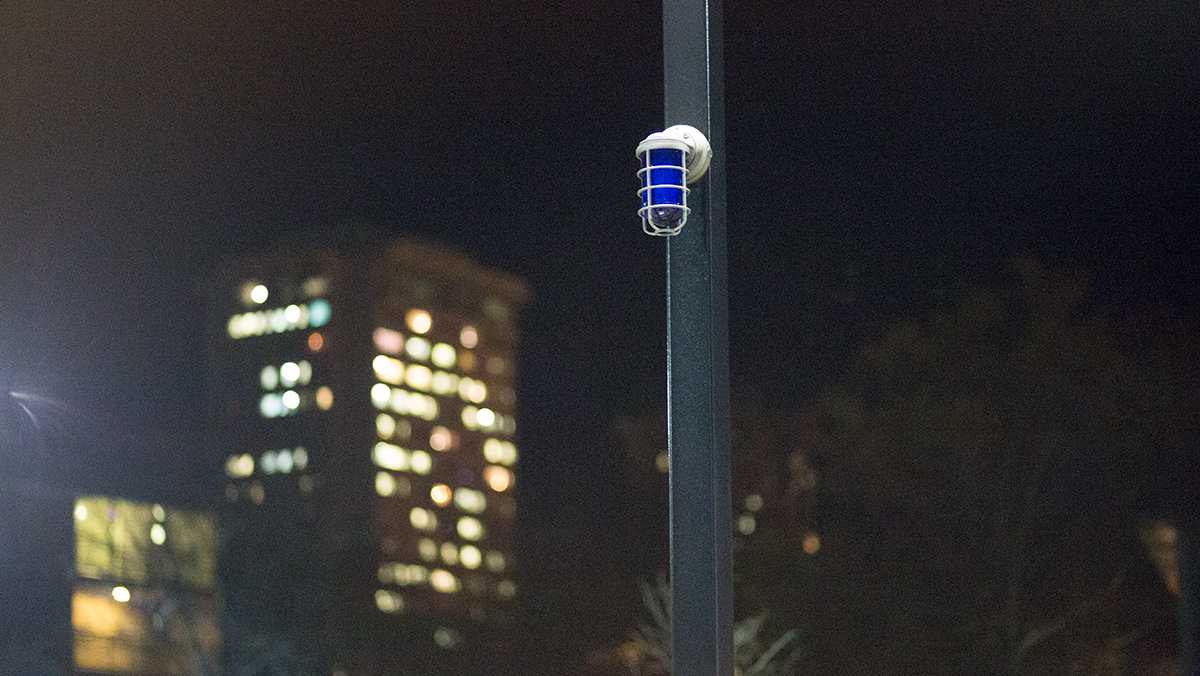 Being from Manhattan, freshman Kate Schulman is familiar with the bleak and sudden downpours characteristic of New York state, but as a new student on campus in Fall 2015, she was less familiar with her surroundings.

As she walked home in the rain around 3 a.m. after a theater performance, she said the presence of the blue emergency lights comforted her but that she was not convinced of their efficiency.

“What got to me was the silence and darkness,” Schulman said. “I felt comforted by the sight of these emergency blue lights, but if I had to guess, I would say there were maybe five total? How do I know someone will be on the other end if I activate one? People forget they exist because they’re not the most efficient system.”

All the while she was walking home, Schulman said she had her cellphone on her, ready to call for help.

Terri Stewart, director of the Office of Public Safety and Emergency Management, said when talking with colleagues, the majority of people from other colleges and universities believe mobile apps such as bSafe or My Force are becoming much more effective than the “old school” emergency phones.

“Nobody wants to be the first to remove the blue-light system completely, but somebody has to make the first move, and I feel like everyone else will follow suit,” Stewart said.

The University of California, Davis, made the first move in 2011 and removed all 107 public safety phones at a price of $70,000, according to UC Davis’ website. Previously, the annual cost of maintenance and repair was $36,000. Code Blue Corporation supplied phones to both UC Davis and Ithaca College.

“Ithaca is consistent with other schools in that their stationary emergency systems are underutilized,” Stewart said. “The bulk of the calls we receive are nonemergencies, whether malicious, mischievous or false activation. The second runner-up is a trouble alarm like weather-related issues that prompt repairs.”

Over the past seven years, Stewart said, the average number of blue-light activations has been 47 per year. When Stewart arrived at the college in 2009, she said there were 59 activations, and since her initial year, these calls have not risen beyond 60 per year. The average response time is two minutes, Stewart said.

The Crime and Fire Logs report five rapes, two cases of aggressive harassment and two stalking incidents since August 2015. Stewart said the majority of these documented incidents were called in to Public Safety by mobile phones.

Stewart said the current telephones at the college have been in place since 1987 with warranties of three to five years. In addition to being underused, she said, the cost of maintenance for the more than 90 blue lights spaced out across the 670-acre campus is expensive.

“It’s a really big expense,” she said. “I don’t know how necessary these phones are, and the reason we can’t quickly transition to phones with cameras and sirens is because a lot of stakeholders have to play in on the decision. There are a lot of obstacles we face, like the right to privacy and other legalities.”

Stewart did not respond to a request for the specific cost of upkeep, and Gerald Hector, vice president of business and finance, was unable to immediately provide the number.

Freshman Christina Fleming is a part of the Student Auxiliary Safety Patrol, a branch of Public Safety operating since 1971. During the academic year, a typical shift for members of SASP runs long into the night, ending around 3 a.m. Fleming said she has experienced questionable scenarios while on duty. Fleming said she thinks the blue lights might be underused because people are not confident in knowing when it is and when it isn’t okay to activate them.

“I was doing rounds for SASP, and this girl walked by on the phone repeatedly saying ‘I think someone is following me.’” Fleming said. “I was mostly scared for her but also thought to myself, ‘That could’ve been me.’”

She said she noticed the woman did not use the blue-light system.

“I think people are scared to press the button because they fear whatever is happening to them is not enough of a reason,” Fleming said. “They don’t realize any threat to safety is unquestionably enough of a reason.”

The website encourages students to activate the phones to get an escort instead of walking alone on campus at night, whether they perceive an immediate threat or not.

Stewart said she thinks the college should follow the modifications made by the University of California, Berkeley. Instead of discarding the phones altogether, the school dropped the label of “emergency notification system” and called them “assistance phones.”

Andrew Kosinuk, crime prevention and community events liaison, said the initial concept of the blue-light phone was something that originated in a different time.

“Even if their usage declines, they still have a valuable function,” Kosinuk said. “Their visibility will influence how safe victims feel and make perpetrators think twice.”

The college currently has minimal cameras mounted on street corners and building tops. These cameras are not used for surveillance but are requested by the dispatcher when a specific investigation requires additional evidence.

“Cameras work for certain school environments,” Kosinuk said. “Ithaca is not historically a campus that has had that approach or values an intense form of observation and recording. I wouldn’t want to see Ithaca go in that direction because we pride ourselves on the balance of privacy versus security.”

Schulman said she thinks there is a stigma for victims who call out their assailants, and surveillance footage would expose the person at fault.

“If you are the victim of an assault, your assaulter doesn’t deserve privacy,” Schulman said. “People should know who they are. Cameras would capture what happened without there being a biased side.”