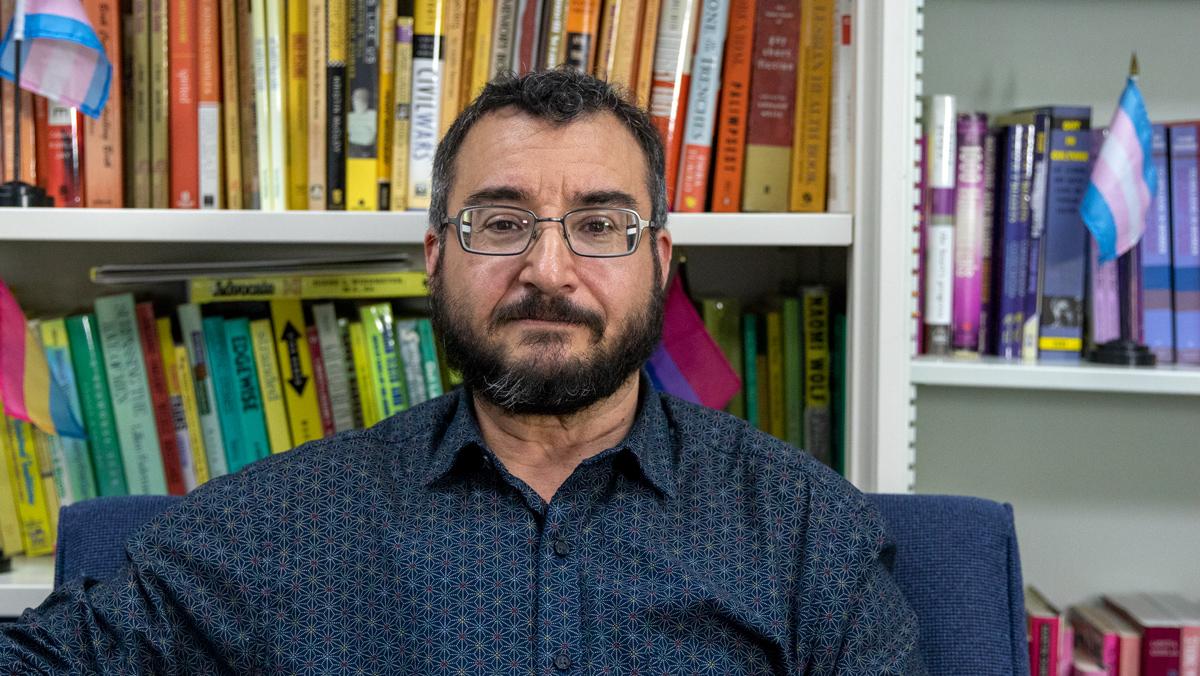 Brianna Mottey/The Ithacan
One of these events was an Ithaca Virtual LGBTQ Local History Tour guided by Luca Maurer, director for the Center for LGBT Education, Outreach and Services. The tour features sites in Ithaca where LGBTQ history was made.
By Alyshia Korba — Assistant News Editor
Published: July 16, 2020

The Town of Ithaca does not usually host large Pride Month events because most of the college student population is gone in June. However, with the COVID-19 pandemic encouraging virtual gatherings, the town is holding its first Summer of Pride.

Ithaca College’s Center for LGBT Education, Outreach and Services is collaborating with Finger Lakes Pulse, Out for Health: LGBT Health and Wellness Program and QGrads — Cornell’s LGBTQ+ Graduate Student Association — to put together a summer-long virtual Pride celebration. The celebration began in May and is continuing through August. The calendar includes events like Pride yoga, a Queer Eye watch party and a virtual tour of the Cornell Botanical Gardens featuring LGBTQ botanists.

One of these events was an Ithaca Virtual LGBTQ Local History Tour guided by Luca Maurer, director for the Center for LGBT Education, Outreach and Services, held June 24. Maurer created the tour in 2019 with Rachel Steinmetz ’19, Cal Goodin ’19, Gianna Caputo ’19 and Rachel Kreidberg ’18. The tour features sites in Ithaca where LGBTQ history was made.

Due to the COVID-19 pandemic, it was not possible to hold a guided tour in person for Pride, so Maurer held the tour via Zoom. Nineteen people attended the event, including students, faculty, staff and people looking to start LGBTQ history tours in other areas.

While the tour has been available remotely since its launch, Maurer said the virtual features have been especially useful during the pandemic. He said this tour is a good way to bring people together, whether it is done physically or virtually.

“Students who are marginalized don’t have a sense of community and connection to their peers as other students,” Maurer said. “We thought this would be a tool to help.”

Maurer’s virtually guided tour also included information about national LGBTQ history, especially the activism of young transgender women of color. One of these women was Sylvia Rivera, a Latina activist for gay and transgender rights. Rivera, a drag queen, took part in the Stonewall Uprising at the Stonewall Inn, in 1969 and later developed the Street Transvestite Action Revolutionaries (STAR) with Marsha P. Johnson.

During the virtual tour, Maurer discussed the Stonewall Uprising that took place in a New York City gay bar, the Stonewall Inn. The bar was often raided by police, which eventually led to a series of violent conflicts between activists and police.

Ithaca experienced similar fights between LGBTQ individuals and police in its bars, as discussed in the tour. Protests in 1970 at Morrie’s Bar may have been the first gay rights sit-in in the country, according to the tour. An organization for gay students at Cornell University encouraged gay people to go to Morrie’s Bar to turn it into the town’s only gay bar. The bar owner removed gay patrons from the bar after the Cornell Daily Sun published an article referring to Morrie’s Bar a gay bar. The protests ended after approximately five months when the owner apologized to the gay community.

Maurer said he thinks it is important to learn this history because it relates to issues that the LGBTQ community faces today.

“I think it’s really important to think about who has come before us and think about the enormity of the challenges that they faced to help us put in perspective what are our goals individually and as a movement,” Maurer said. “If Sylvia Rivera could figure out how to start a homeless shelter and feed people who were hungry when she was 17 years old in the early 1970s when there was no one supporting her, it kinda makes some of our problems seem kinda small and solvable.”

The tour also includes several stops at Ithaca College. One of these is the HIV/AIDS memorial daffodil gardens which are located all across campus. Maurer said the college’s Action for AIDS committee began planting daffodils on campus in 2001 in memory of Cleve Thomas, a local HIV/AIDS activist. After planting the flowers annually for eight years, approximately 10,000 daffodils bloom on the campus each spring.

The college also housed one of the first recorded meetings on bisexuality. Over 130 people gathered at the college in 1972 to discuss bisexuality during a conference for Quakers. The meeting resulted in a written statement called The Ithaca Statement on Bisexuality, which was adopted by the Quaker group, the tour information states.

Abraham recited an original poem, “And You Shall Love,” at the Havdalah.

“My God whispers to me, / ‘Don’t you see? / Your queerness / has always been compatible with your holiness,” Abraham wrote in the poem. “Your love was never your sin. / Listen! / V’ahavta – / your love is your mitzvah.’”

Valderrama said he read a series of affirmations and intentions that he wrote focusing on acceptance of transgender Jewish bodies.

“It was inspired by my experiences as a visibly trans Jewish person, and my desire to remain in tune with my body despite the assumptions and expectations other non-trans, non-Jewish people place on it,” Valderrama said in an email. “It’s always nice to connect with other LGBT+ Jewish people through services.”

Lauren Goldberg, executive director of Hillel, said the Pride Havdalah felt impactful despite not being physically together.

“There was something even more powerful about us really making the effort to gather through this virtual platform, be in each other’s homes, be face to face with each other,” Goldberg said. “It’s a bittersweet moment that we’re in. I think there’s a lot of joy associated with Pride, but particularly this year there is so much strife and our world seems so broken. I think for many of us, we were holding on to the kind of duality of that.”

The calendar includes recurring events like the LGBTQ Lunch and Learn Series and Flame Night Fever. One upcoming event is Dance With Pride, an open-level dance class led by Aimee Rials, assistant professor in the Department of Theater Arts, on July 20.

More events will be added to the calendar throughout the summer, Maurer said.