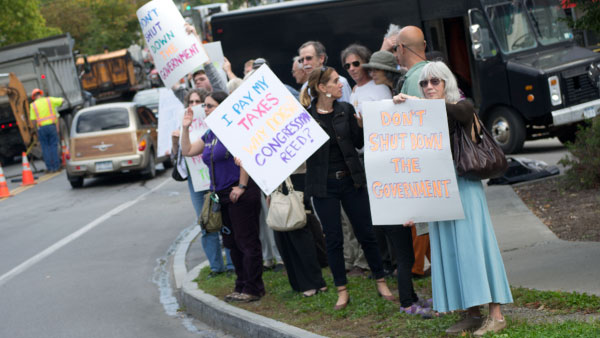 Ithaca locals and students took to the streets Tuesday opposite the office Rep. Tom Reed, R-N.Y., on East Martin Luther King, Jr. Street to voice their opposition to a government shutdown.

Just minutes before midnight on Tuesday, the White House ordered a government shutdown after Congress and President Barack Obama failed to agree on a spending plan for the fiscal year, which begins Oct. 1 every year. The central debate was around the Patient Protection and Affordable Care Act, or “Obamacare.”

Sen. Ted Cruz, R-Texas, led a group of Republicans in preparation for the shutdown, preferring to disrupt the government rather than allot funding to the bill, which requires all U.S. citizens to have health insurance.

Reed is among a majority of House representatives who are against the Affordable Care Act.

The shutdown stopped the operation of nonessential services, leaving more than 700,000 federal workers furloughed. All national parks have been closed down, and Washington’s Smithsonian museums are closed. According to the CNN, the Chemical Safety and Hazard Investigation Board, the Federal Labor Relations Authority, the Federal Trade Commission and the National Science Foundation are among federal agencies that are currently closed.

In addition to protesting the government shutdown, Ithaca residents were critical of Reed’s call for equality in health care. In a statement to The Ithacan, Reed said members of Congress, congressional staff and the president receive special treatment under the president’s health care law.

“The House passed a bill Monday night to keep the government open by putting all Americans on a level playing field and ending special treatment for Congress,” he said in the statement. “The bottom line is the House made a simple, fair request to end special treatment for Congress, and the Senate rejected, choosing to protect their personal interests rather than keep the government open.”

John Dennis, a local business owner and organizer of the protest, said Reed was being hypocritical by calling for equality for all.

“There is a blatant hypocrisy to say that he is voting for a government shutdown because he wants to level the playing field,” he said. “He hasn’t paid his taxes on time for 38 times recently. He paid some of his vacation-home taxes from his campaign funds. He is really the last person that should talk about leveling the playing field.”

The Associated Press reported that county tax records showed in August that Reed had been late paying his property taxes 38 times since 2005. Earlier this year, Reed spoke to several local media outlets and acknowledged that he had inadvertently used campaign funds to pay property taxes in Steuben County.

Dennis said it was fiscally reckless to shut the government down.

“All of us [protesters] feel that an economic shutdown is a very big-headed way to go about solving our problems,” he said. “There needs to be more non-partisan negotiation and problem-solving in Congress, and unfortunately, we are not seeing it.”

“The bigger issue is if this goes on until October 17, which is in two weeks, there is the possibility of the government shutdown continuing in coordination with the failure to raise the debt ceiling,” Beachler said. “If you don’t raise the debt ceiling, the government runs out of money; it can’t pay its debt. We have had shutdowns before. We have never had a default of the debt. That could rock the world financially. We could easily go back into recession.”

Jim Dennis, a Tompkins County legislator, said he does not expect the county to be impacted by a short-term shutdown. He said Ithaca Tompkins Regional Airport air-traffic controllers that have already been affected by budget cuts will most likely not be impacted.

“It’s pretty clear that they are not going to take those people out of the towers across the nation,” he said.

Ithaca Mayor Svante Myrick also said the city has not been affected by this shutdown. He said services such as the Police Department, the Fire Department, the Building Division and the Department of Public Works will continue to operate.

Anthony Hopson, assistant vice president of community/government relations and civic engagement at the college, said the college may be affected in several ways, depending on the duration of the shutdown.

“If it’s a long government shutdown, there is a greater chance obviously of there being some implications not only for Ithaca College, but for colleges and universities in general,” Hopson said. “Specifically, in regards to the distribution of federally awarded funds. That’s where colleges are most vulnerable, whether it is the dissemination of financial aid [or] federally sponsored research grant money.”

Several college faculty conducting research have already been affected by the shutdown. Luke Keller, associate professor and chair of the physics department, conducts research using a grant from the University Space Research Association, a sub-contractor of NASA.

“I work with my students, and we have been working on this for the past several years,” he said. “I got a letter from USRA on Tuesday saying stop work completely.”

Keller said his plans to travel to California with a student for a conference later this month will most likely be affected by the shutdown, which he said will disrupt his research schedule.

“We have a lot of work to do,” he said. “We are actually testing software used on the [Stratospheric Observatory for Infrared Astronomy]. These observations that we were going to make were scheduled very far in advance. So it is likely that my student will not get the data for her senior thesis this year because of that.”