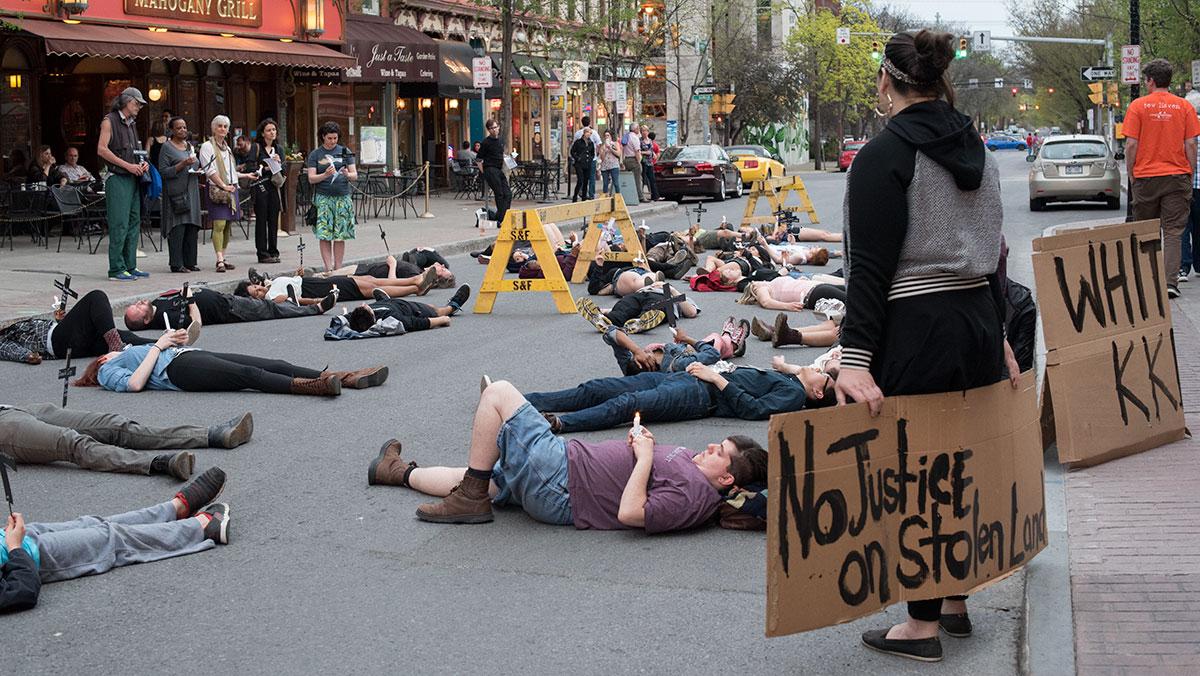 Amanda den Hartog/ The Ithacan
More than 50 Ithaca-area residents hold a die-in protest on South Aurora Street near The Commons.
By Kira Maddox — Editor-in-Chief
Published: May 5, 2015

White wax from dozens of candles dripped onto the pavement as the sky darkened, threatening rain. The small flames flickered in the breeze, but the vigil participants did not waver. They stood in solidarity with Baltimore.

At 7 p.m. May 4, more than 50 Ithaca residents attended a vigil on South Aurora Street near The Commons in honor of Freddie Gray, a 25-year-old black man who was taken into custody by the Baltimore Police Department on April 12. After being in a coma for a week, Gray died April 19 of severe spinal injuries sustained while in custody. The death was ruled a homicide May 1, and all six officers involved have since been given charges ranging from manslaughter to misconduct. Queer Kids Care, a new Ithaca-area group affiliated with Black Lives Matter, organized the vigil in his honor, having hosted two others in the past: one for Eric Garner in December 2014 and one for Tamir Rice in February.

The vigil began with participants lining the curb of South Aurora Street, sitting in front of eateries like Mahogany Grill and Mercato Bar & Kitchen, holding their crosses and lit candles in front of them. From across the street, senior Evan Scott and Garen Whitmore ’14, founding members of QKC, held a black microphone with Scott first stating that the vigil was for justice, “not just for young Freddie Gray, but for those before him and those after him,” and then Whitmore recited a poem denouncing white people who are comfortable within their own systems of privilege for not speaking out against issues of inequality. 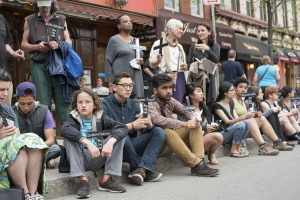 Vigil participants line up on the curb of South Aurora Street, holding crosses and candles.

Those in attendance were given white candles and crosses to hold. The crosses, painted either black or a mix of pink, blue and white to represent transgendered people of color, bore the names of unarmed citizens killed by police. Whitmore said the crosses were laser cut from wood in solidarity by an architect student at Cornell University.

“We did about 30 for April — just for April — and I know that we have the months of November, October and a few others,” Whitmore said. “So it’s literally — there’s almost a person per day for all of the months that we’ve done.”

Scott said even with all the crosses, there were still more names that wouldn’t fit. Participants were encouraged to memorize the names on the crosses they received and to look up the individuals at home and learn their stories and the circumstances in which they were killed.

The Ithaca Police Department was present, and officers set up barriers at both ends of the road between East State Street and South Seneca Street as protesters held a die-in. Chants of “It is our responsibility to fight for our freedom, we must love and protect each other” and “No justice, no peace, no racist police” echoed from the ground as participants lay on the pavement before a moment of silence. One man was escorted out of the area by the IPD at Scott’s request. Scott said the man was drunk and trying to incite violence and harassing vigil participants.

The microphone was open for people to speak openly about their experiences. Some approached and recited improv poetry, while others expressed the fear they had every day “living while black.” One man in attendance expressed his grievances with his school system, which he said has not openly discussed any of the killings that have spurred the Black Lives Matter movement, nor the current state of Baltimore after the death of Freddie Gray. He denounced the negative light some people view it in, saying that riots only happen after sporting events and that Baltimore is an uprising.

After about two and a half hours, the vigil ended, and participants gathered together in the street for a moment of reflection before heading home. Overall, Scott said, QKCxBLM has been in contact with other BLM organizations, as well as the three women who founded BLM and that future events depend on the climate of the nation. The group’s ultimate goal, he said, is awareness.

“I feel like because we’re in a college town — I went to IC, which is a private institution, and then there’s Cornell — there’s a lot of people who are educated, and yet still allow themselves to be disconnected from the issues, so we’re trying to bring about awareness and healing,” Scott said.

QKCxBLM was started late last year by Whitmore, Scott and senior Catherine Mailloux. The group has made it a goal to hold candlelight vigils in downtown Ithaca in support of the nationwide Black Lives Matter movement and hopes “to bring issues that disproportionately affect the LGBTQIA and POC community to the forefront of your reality” and “to provide a community space for citizens to heal from issues of oppression in intersectional and POC communities, and to understand the need for social and political reform,” according to its website.

Ithaca resident Liz, who requested not to have her last name published, said she attended the event because her father is a police officer, yet she feels more related to those who are fighting for equality than to her household that enforced the narrative that the police always deserve respect.

“I refuse to respect murder and violence and racism in 2015,” Liz said.