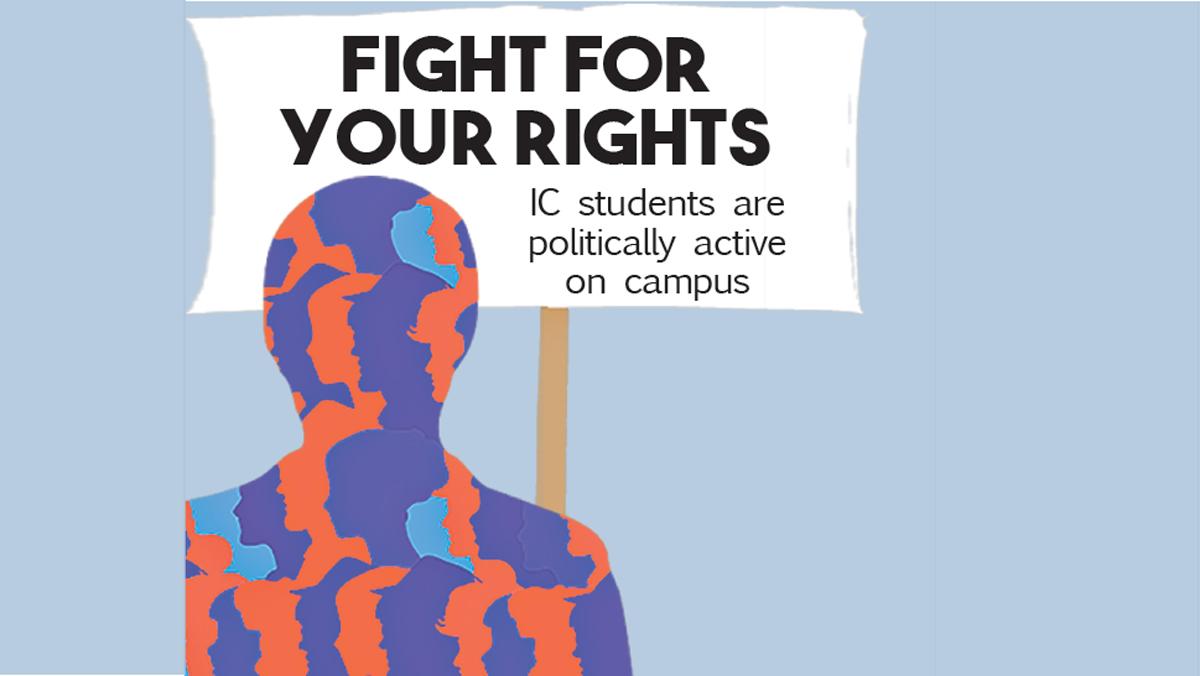 Junior Anna Gardner was originally worried when she heard that Larry Pratt, former executive director for Gun Owners of America, would be speaking at Ithaca College in November 2017, she said.

Gardner said she feared the right-wing speaker would stifle a diverse conversation from occurring about gun culture in the United States. To respond, she and some other students created a protest and information session about guns.

“At the event, we had a few students who were part of the Young Americans for Liberty and they came and were very much like, ‘We know that we’re the people who are the odd ducks out.’” Gardner said. “They were very much like, ‘We’re happy to talk about this’ ‘this is how I feel about it versus how you feel about it.’ So ultimately, at the end of that, I felt like it was a very productive dialogue and discussion that we had.”

This protest is reflective of the political activity on campus at the college. A published study written about in The Washington Post found that Ithaca, along with other college towns like Boulder, Colorado, is among the 365 most politically tolerant metropolitan areas in the country. The city of Ithaca was placed second on the list of 365 politically tolerant metropolitan areas, Claassen said.

The study defines political tolerance as the degree to which citizens will support the extensions of civil liberties to all, including those who advocate viewpoints that are highly disagreeable. The research by Christopher Claassen, lecturer in the Department of Politics at University of Glasgow, Scotland, pooled data from 4,000 different respondents who were asked questions about free speech during 2007–11. His research found that there is a direct correlation between college towns and the degree of political activism and tolerance of an area, he said.

Students at the college are familiar with participating in political action on a number of pressing issues. On campus, students have participated in a number of protests, including protests supporting the part-time faculty union, rallies for Planned Parenthood and protests against racism on campus and former–college president Tom Rochon.

After the election of President Donald Trump, protests occurred across the country as well as in Ithaca. A week after the 2016 election, approximately 100 campus community members gathered at Free Speech Rock to protest Trump’s stance on undocumented immigration. Students joined the Women’s March following Trump’s inauguration and a protest on International Women’s Day on the Commons in conjunction with a larger protest movement about women’s rights, called “A Day Without a Women.”

Students also participated in We Are Seneca Lake protests in 2014 against the fracking near Seneca Lake. Four hundred were people arrested in total from both the town and college. There is also a Black Lives Matter movement chapter in Ithaca, with protests in 2015, a hosted lecture in 2016 and a celebratory event in 2017. Students also participate annually in the Take Back the Night march, which raises awareness for sexual assault, rape, domestic violence and child abuse.

Claassen said the empirical polling method used does not allow them to say that a place like Ithaca is definitively more tolerant than anywhere else. Rather, his research looks at how towns with higher education institutions affect the amount of political activism and tolerance in an area.

There are mixed reactions among the college community to the city of Ithaca being considered politically tolerant. While some said they feel comfortable engaging in political dialogue and activism and that Ithaca is tolerant of a wide range of political views, others said they feel free speech and political expression is only tolerated when the views being expressed are coming from a left-wing perspective.

Angela Rulffes, assistant professor in the Department of Communication Studies, said she teaches courses about free speech at the college. Rulffes said she does not think the political culture at the college shuts down speech from opposing viewpoints.

“The warning flags are when someone shuts someone down completely,” Rulffes said. “So when someone has a speaker coming, and there’s so much protesting that you can’t even have the speaker there, that’s kind of a warning flag. And I haven’t seen any of that at Ithaca.”

Junior Joe Cruz, who helped raise money for hurricane relief in Puerto Rico, said the campus is usually tolerant, but he said he thinks some people are unaware and uneducated about certain issues that do not affect them. Cruz said he felt a need to raise awareness for the situation in Puerto Rico because he thinks students at the college do not understand what is happening there.

Junior Carlie McClinsey, Student Governance Council president, said the campus is open to a variety of opinions, as evidenced by the recent events held by IC Republicans.

“IC Republicans have been holding a lot of events recently,” McClinsey said. “I think that those are great opportunities for students on campus who may not feel that their conservative beliefs are being voiced have that opportunity. And for students who may identify as liberal, those same events can allow them to understand the other side of the argument.”

Donald Beachler, associate professor in the Department of Politics, said he thinks professors at the college do not always create politically tolerant classrooms and instead teach from their own point of view. He said he believes the media plays a role in everyone’s ability to reinforce their own views, rather than being exposed to differing views.

“It’s easier to find things that reinforce your own point of view,” Beachler said. “You probably have a generation of faculty, even baby boomers, who think their job is political advocacy or social justice. I think we should be more about inquiry than indoctrination.”

The college currently has policies in place to protect the free speech of students, faculty, staff and guest speakers on campus. Nancy Pringle, executive vice president and general counsel at the college, announced plans in November 2017 to make the free speech policies at the college more definitive. In December 2017, the college announced that a working group had been formed to look into the college’s Rules for the Maintenance of Public Order. The working group is being led by President Shirley M. Collado and the tri-council group consisting of the Faculty Council, Staff Council and Student Governance Council. The revised draft of the Rules for the Maintenance of Public Order is currently in a public comment period.

McClinsey said the SGC is looking at free speech policies because they have not been updated in many years.

“Different clubs want to bring in different speakers,” McClinsey said. “We’re keeping our students safe, which is the main purpose of all of it. We’re just trying to address it before it becomes an issue.”

Junior Lucas Veca, president of IC Young Americans for Liberty, said he does not feel that the college is accepting of his opinion. He said he thinks people censor themselves to be politically correct because they fear offending anyone.

“I think it’s more a tone people use,” Veca said. “People haven’t thought critically about their ability to speak freely, and I think students fall into that because they get caught up in their feelings of being offended.”

“I think that a lot of students do not feel as if their viewpoints can be expressed in an environment which they can be heard out properly,” Greco said. “I think that comes from all spectrums of various issues and political ideologies and thoughts.”

Greco said IC Democrats is trying to host a debate with IC Republicans because he thinks it would be helpful to create a more open and accepting political environment on campus.

“I hope that a lot of people would show up to an event like that because I think its purpose would be to foster meaningful debate,” Greco said. “I think that re-engagement with that meaningful debate, I think is a great place for it to start is on college campuses.”