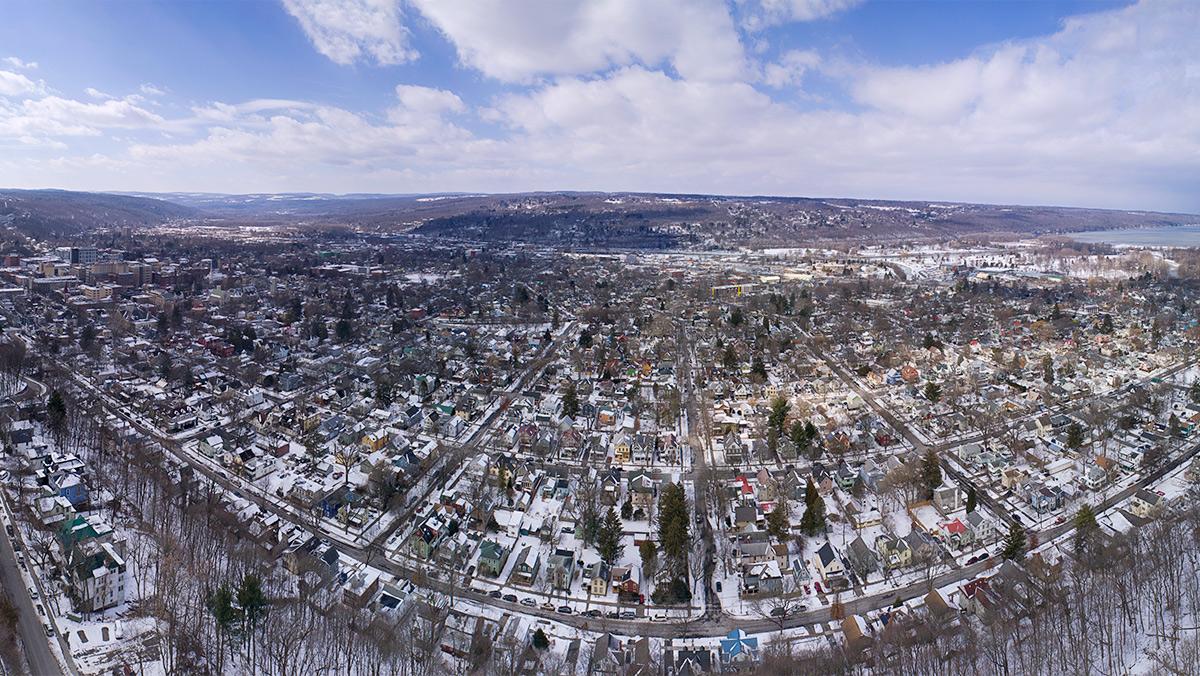 As the 2022 elections near — following controversial redistricting — the perceived political apathy of 1.2 million students enrolled in postsecondary education in New York state is becoming more concerning for long-term residents who are impacted by the census of college towns like Ithaca.

During the academic year, students from Ithaca College and Cornell University account for roughly two-thirds of Ithaca’s population. College student populations throughout the state impact the census report, which in turn, affects local redistricting, determining the number of Congressional seats allotted to each state and how federal funding is allocated. Students are counted in the census as residents of their collegetown because that is where they live and sleep most of the time. Due to the COVID-19 pandemic, the U.S. Census Bureau asked colleges and universities to provide rosters for off-campus students. This was in an effort to include students in the census where they would have been living if there were not school closures or shifts to virtual learning. While they are counted in the census, students have to choose between registering to vote in their college’s county or in their home county — many of whom continue to vote at home.

Donald Beachler, associate professor in the Department of Politics and resident of Ithaca, said he is frustrated with the lack of student involvement in politics, especially when it comes down to state and local city redistricting. Ward 4 of the Ithaca Common Council has a total population of 7,594 people — composed of mostly Cornell students — but only 102 votes were cast in the 2021 election for its City Council representative, according to The Ithaca Voice.

“My old joke was that more students throw beer cans on the street in Collegetown than actually cast votes,” Beachler said. “That’s one of the implications of [dense student populations]; you have very few voters.”

Senior Kaitlyn Katz said that when she started at the college she changed her voting address so she could vote in Ithaca rather than sending an absentee ballot to her hometown in Westchester, New York.

“I’ve enjoyed getting to kind of know a little bit more about the Ithaca politics and being able to have a decision in that,” Katz said. “Since I have now lived in Ithaca for four years I think it’s important that I get to make my voice heard in where I’m currently living.”

The City of Ithaca released its first draft proposing ward lines March 28. The draft proposal was drawn with the intention of keeping neighborhoods and communities together as well as having districts within a 5% deviation of each other.

Beachler is one of many residents who wishes that college students would be diluted into the city wards, allowing long-time residents to have a larger impact in local voting.

“They’re [students that are] never going to pay $1 of property taxes, so it’s easy to sit there and raise taxes that you’re never going to pay,” Beachler said. “But by diluting students you go against what generally is considered good practice in drawing districts, which is to keep neighborhoods intact and to draw compact districts. … I don’t think anything will change.”

According to the Tompkins County Board of Elections, there are 63 voters with addresses at 953 Danby Road and the Circle Apartments at 1033 Danby Road. There are also 1,140 voters with a 14853 zip code unique to Cornell University’s campus. Many students who attend both colleges live off campus and therefore the total of 1,213 students voters does not fully represent the number of students who are registered to vote in Tompkins County.

Ithaca College and Tompkins County have moved into a newly blue 22nd Congressional District as a result of state redistricting. Prior to the redistricting, the college and county were in the 23rd Congressional District. The current Rep. Tom Reed (R-NY), does not plan to run again, leaving the election race without an incumbent candidate. There are currently 27 districts, but when the New York census recorded just 89 fewer people than the 2010 census, the state lost one seat in the U.S. House.

After the redistricting process, Democrats have an advantage nationally, with 182 blue districts and 147 red districts. However, during midterms the sitting president often loses House seats for their party, and with 62 competitive districts, elections will likely be impacted by President Joe Biden’s job-approval rating, which is currently at a low 40%. The Republican Party also has a majority of voter support among likely general-election voters, according to congressional polling data collected by RealClearPolitics. The results showed a polling average of 46.8% Republican voters against 43.1% of Democratic voters for the upcoming elections.

Democratic student voters like Katz are concerned that the blue districts with more Republican voters are unbalanced because students are not voting.

“A lot of people in Ithaca are like, ‘It’s already blue, why does it matter,’ but I don’t think that’s so much the point,” Katz said. “We need more representation and it needs to be that more people are being heard. … I don’t really know how to increase the student voter population, maybe even just instilling a little bit of an urgency.”

Junior Jacob Shelley now lives in the Town of Ithaca but votes where he grew up in Trumansburg, another town in Tompkins County. Similar to Katz, Shelley said student voices are oftentimes missing from political discussions and decisions.

“To be honest, I think a lot of people in this area are comfortable with the fact that usually the Democratic Party has a strong presence and isn’t really rivaled in the Ithaca area,” Shelley said. “I think to a lot of people that just makes them comfortable so they don’t necessarily want to get out and vote. Student voting is not too incredibly hot at the moment, but if we can boost that, I think there would be a more accurate representation of what Ithaca is because Ithaca without its student population is a very different Ithaca than when it is with a student population.”

A born and raised Ithacan, Vanessa Fajans-Turner, is one of the first Democratic candidates to join the 2022 election race for the 22nd District representative in Congress.

“I think the world would be a much better place if students all voted regularly, and if they voted wherever they feel at home and feel most impacted by policies and actions,” Fajans-Turner said. “Particularly because the issues I care so much about like climate change are ones that really will impact younger generations the most.”

So far the candidates who have begun campaigns for the 22nd District along with Fajans-Turner are Democrats Francis Conole, Sarah Klee Hood, Mikayla Ridley, Josh Riley and Sam Roberts. The Republican candidates are Mike Sigler and Brandon Williams. The filing deadline is April 7 for candidates running in the state primary election, held on June 28. To be eligible to vote in the primary, applications must be received in person by the board of elections no later than June 3 or by mail no later than June 8. Since New York is a closed primary state, voters must be registered under a specific party. Therefore, if a resident is not a registered Democrat they cannot vote for candidates of that party and vice versa.

Despite the Republican Party’s lawsuit claiming New York’s redistricting is unconstitutionally gerrymandered, Justice Patrick F. McAllister — a Republican — allowed the map to be signed into law Feb. 3 by Gov. Kathy Hochul. The lawsuit comes after the Democratic Party has fought for years to outlaw partisan gerrymandering with the Freedom to Vote Act.

Gerrymandering is the practice of drawing district lines to create an advantage for a political party by packing together voters and either diluting the opposing party throughout the districts or bypassing areas to limit their possible seats in Congress.

“Lawsuits like this make people only more suspicious and cynical about the Democratic process and it’s incumbent on every political actor and official to try and restore that faith,” Fajans-Turner said. “The issues that we all care very much about aren’t constrained to districts.”

Anna Kelles, the Democratic Assembly Representative for Tompkins County, voted to adopt the new district lines for the state. She said the priority in deciding on new districts was making sure to give marginalized populations a voice that had previously been diluted into different districts and therefore denied a political voice. Kelles said any political changes impacted by the new districts are an indirect result of keeping previously divided populations together.

“I find it comical in the context of what’s going on across the entire country,” Kelles said. “Looking at how much voter rights are being torn down across very Republican-dominated states to a level where I think it definitely borders on taking away human rights.”

“Albany Democrats drew an appalling gerrymander in an attempt to save their slim House of Representatives majority,” the statement said. “Four Republican seats were axed around the state in egregious ways. The map shows Democrats are not against gerrymandering; they are only opposed when it hurts them. In a state [where] President Trump won 37% of the vote, Republicans deserve more than 15% representation in Congress.”

Non-partisan organizations working to make sure district maps are free of political influence, like Common Cause, are also against the new lines. Natalia Philatov, assistant director at the New York chapter of Common Cause, said the lines are so heavily gerrymandered that some districts are non-competitive. Nonprofits like Common Cause are advocating for lines to be drawn by a citizen-led independent redistricting commission with no political stake in redistricting.

“Both parties engage in this sort of behavior,” Philatov said. “That is the reason why it shouldn’t be up to politicians to draw districts. … We need to reform this process and make it better so that it serves our communities rather than politicians. It’s a disservice to the voters.”

College promotes initiatives for students to take US Census