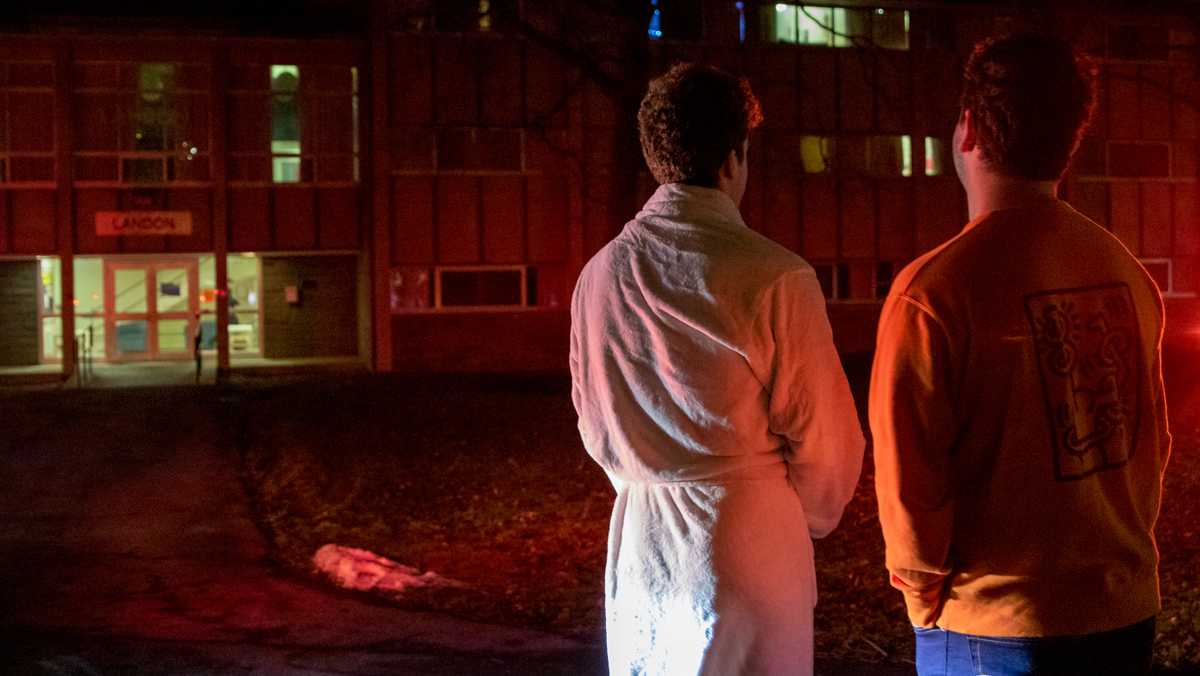 Abbey London/The Ithacan
From left, freshmen Jake Maskell and Sam Zucker wait to hear if they can re-enter Landon Residence Hall after a fire extinguisher was set off, forcing residents to evacuate.
By Alexis Manore — Assistant News Editor
Published: February 4, 2020

Update: At 11:38 p.m., Landon Hall residents were allowed to re-enter the building.

Original Story: At approximately 10:45 p.m. Feb. 4, Landon Residence Hall residents were forced to evacuate their rooms because of a fire extinguisher that was set off, but there was no fire.

Officers from the Office of Public Safety and Emergency Management told students there was no fire but that a fire extinguisher went off, causing the air in Landon Hall to become toxic. Students were not allowed to re-enter the building until it was cleaned. Residents were told to go to the Campus Center to stay warm.

Freshman Jake Maskell, a Landon Hall resident, said that at first, he was not worried about a fire because he thought it was a fire drill.

“When we walked out, there was just smoke in the hallway,” he said. “We’ve already had four fire drills here this year, so we thought it was another regular fire drill. We walked out like, ‘Oh, is it just someone burning mac and cheese again?’ But there was actually smoke there so we left.”

Dave Maley, director of Public Relations at the college said the dry chemicals in the fire extinguisher omit what looks like smoke when it is discharged, which caused the fire alarm to go off. He said everyone has to evacuate when a fire alarm goes off.

Maley said it seems as if a student set off the fire extinguisher.

Freshman Campbell Slazyk, a Landon Hall resident, said he was frustrated with Public Safety because of its lack of communication with the residents.

“It’s so late, and it’s freezing out,” he said. “It’s taking them so long to communicate with us and tell us what’s going on.”

Maley said the Ithaca Fire Department, the Office of Environmental Health and Safety and Public Safety worked together to identify if there was a fire in Landon Hall. He said it also took a long time to clean up the powder that was discharged, because it should not come into contact with humans, and if the students had kicked the powder around, it could have set off the fire alarm again.

Maley said the college prioritizes the safety of students.

ICLA students return to campus after evacuation due to fire