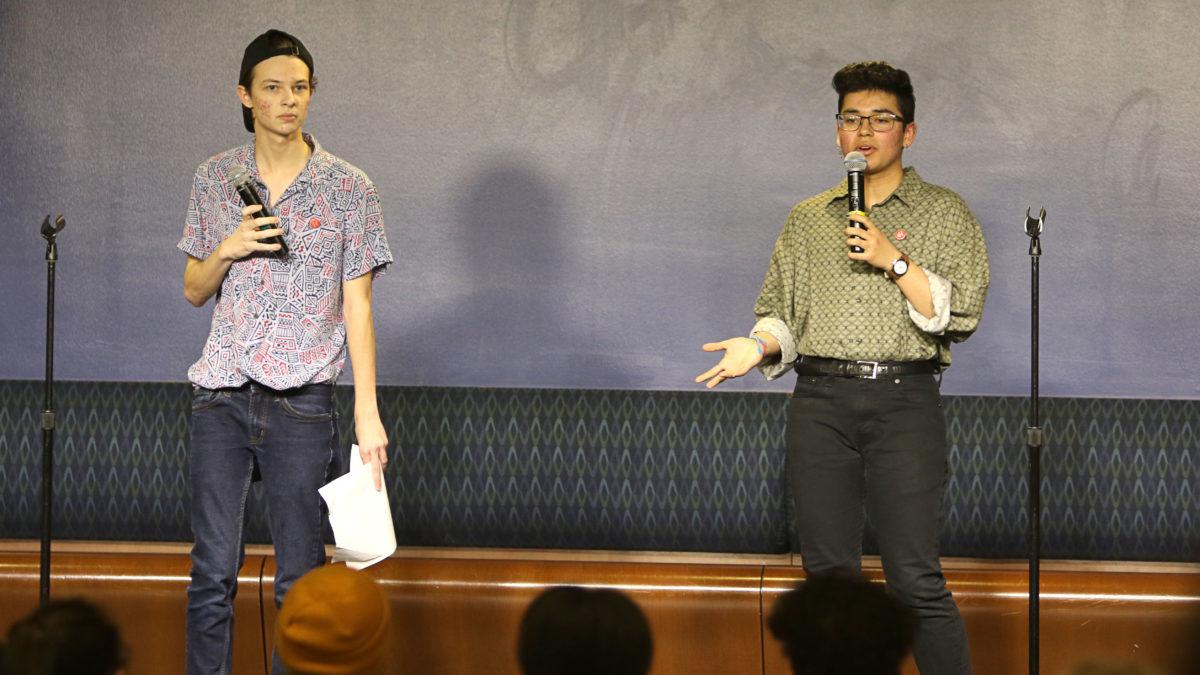 In the wake of a New York Times article that revealed a memo written by the federal government to redefine gender based on one’s sex assigned at birth, transgender and nonbinary individuals from Ithaca College and the surrounding community shared their experiences in an open mic–style event in IC Square on Dec. 3.

Leaders of Spectrum, PRISM and IC Proud, LGBTQ clubs on campus, came together to organize the event, “Elevating Trans Voices,” after discussing their frustration with the memo and the way it was discussed in the media. Twelve students and community members spoke about their experiences. The Ithaca College chapter of Planned Parenthood Generation Action also tabled at the event to act as a resource for people with questions about the transgender community, and there was a letter of solidarity that event attendees could sign to express support. Approximately 40 people gathered to listen to the stories of transgender and nonbinary people.

“It was being reported on and talked about by cis folk, and it wasn’t focusing on transgender and intersex people who are affected,” he said. “It was cis people doing the reporting, and I saw a couple of frustrating instances of cis people targeting and seeking out trans people and using wrong terminology.”

In an attempt to do more activism-based work on campus and to address the memo, the leaders of Spectrum reached out to the other LGBTQ groups and started planning the event.

“I want to have an event put on by trans people for trans people, with trans people speaking to cis people and cis people listening,” Haney said. “So, we worked hard to do this with as many different voices as possible, and we tried to make it as comfortable as possible for everyone.”

Junior August Miguez, treasurer of PRISM, spoke on stage about the importance of giving trans people a public place to share the truths they live, especially in the context of President Donald Trump’s administration’s proposal to redefine gender as biological and remove workplace protections for transgender and intersex people.

“We as a community have always been here,” they said. “We as a community will always be here, and we ask for support and understanding that we desperately need if we are to exist in a society that disenfranchises, dehumanizes and seeks violence against us.”

Sophomore Luis Valderrama, co-president of IC Proud, spoke about the high standards and lack of representation existing in the trans community. He said that when he first came out, he was living in Colombia and his only connection to the trans community came from the internet.

“Looking at different trans people, men specifically, on the internet, the people that I saw were all white, big and masculine — not at all the way I envisioned myself,” he said. “It didn’t fit how I looked or acted then, and it didn’t really fit with the kind of man or person that I wanted to be. I felt very alienated by the representation that existed and I had access to.”

He said that when he found an essay written by another young, Latin American trans man, he felt liberated and comforted. He said diverse representation of trans people is important to him in part because not all trans people want to be held to high gender standards.

“There are so many rules about what trans people should look like and act like,” he said. “They’re unspoken in a weird way, but I still know that I don’t fit them. I like clothes a lot — I plan my outfits days in advance. When I think about what clothes I want to wear, it’s not just about fun, but also about how other people will perceive me.”

Freshman Jacqueline Laferriere said she attended the event as an audience member as a part of her journey to become a better ally to the trans community.

“I’m still trying to figure out what being an ally means, and I think this is a good space to be in for that,” she said. “I was very moved by the personal stories. It made me sad hearing about the things trans people have to go through on a daily basis that most cis people never have to think about.”

Vanessa Taylor, a member of the Ithaca community who spoke at the event, asked the audience to raise their hands if they put on a seatbelt in the car without thinking about it. Most of the room raised their hands in response.

“It took the federal government 30 years to get the thinking of an entire nation to shift into a mode of instinctively putting on a seatbelt in the car,” she said. “The reason I’m telling you that is because, as LGBTQ+ people, we’ve made a lot a progress in the last few years, but we still have a long way to go.”

Taylor said many members of the LGBTQ community, regardless of age, are not alone in feeling disenfranchised. She said she holds onto something her mother told her.