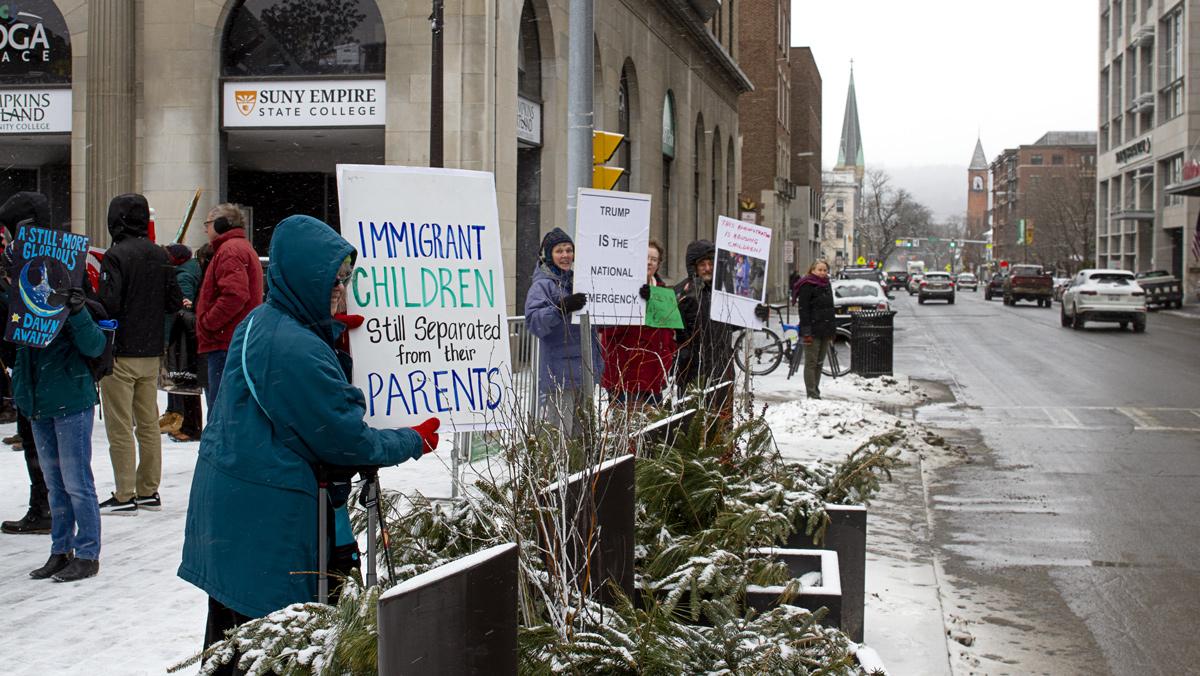 While many Ithacans were home from work celebrating President’s Day, some took to the Commons Feb. 18 to protest President Donald Trump’s recent declaration of a national emergency to build a wall on the southern border.

“The national emergency declared by Trump is outrageous, it’s an overreach,” Amala Lane, a local resident and the organizer of the protest, said. “It is actually against the constitution. He is not living up to the standards of iconic presidents like Washington and Lincoln.”

Trump declared a national emergency at the Mexican-American border Feb. 15 in order to have access to $6.7 billion that Congress had allocated to other areas of government to build a wall. This declaration came after a bitter dispute with Congress over funding for the wall that resulted in a month-long government shutdown. Trump also signed a bill to avoid another government shutdown and allocate $1.375 billion toward fencing on the border. He originally asked for $5.7 billion.

Lane organized the event the day prior through social media after realizing that no one else in the Ithaca community had organized a local rally. Activists in many cities across the country like Syracuse and Washington D.C. organized rallies with hundreds of people with the support of MoveOn.org to protest the Trump’s actions, but Lane said she was surprised no one in Ithaca had organized one.

“I was asking friends why other groups didn’t organize it and someone said ‘Maybe they’re burnt out,’” she said. “Trump has been a never-ending spiral of hell.”

Although she has attended many rallies in the past, she said this was her first time organizing one.

During the rally, approximately 50 people braved the bitter cold for an hour to rally in the Bernie Milton Pavilion at noon and held signs expressing their discontent with the Trump’s recent move. They chanted lines like “I say emergency and you say fake” and “When immigrants are under attack what do we do? Stand up and fight back.”

Some of the rally goers came to the front of the crowd to express their personal outrage with the policy.

Garry Thomas, a local resident and professor emeritus in the Department of Anthropology at Ithaca College, said he wishes Trump was not the president.

“I am so deeply offended by so many of these policies and it’s so inhumane,” he said. “Trump professes to be a Christian and I wonder what is so Christian about building a wall.”

Steven Stoblick, a local resident who attended the rally, said he felt it was important to protest the president’s actions.

“I really feel that the president went too far in overstepping the boundaries of his office and created a fake crisis in order to do that,” he said. “I didn’t want to let that go by without saying something about it.”

The rally ended with the attendees huddling together in a circle and having a moment of silence.