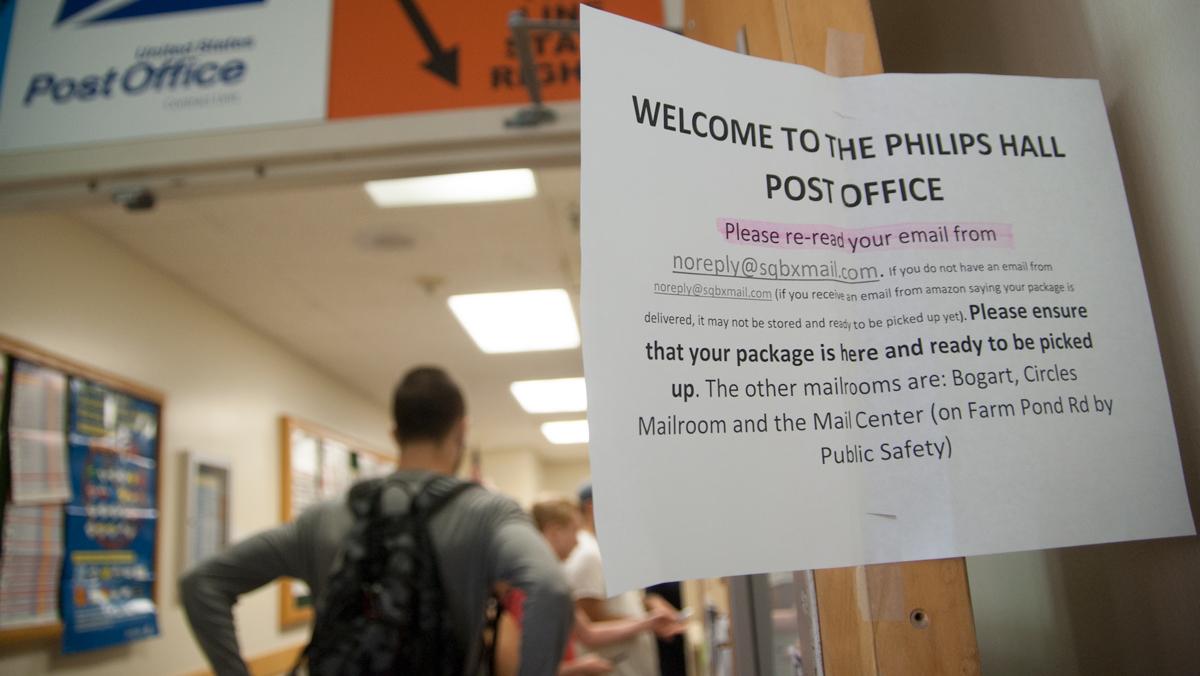 Elana Chang/ The Ithacan
Mailroom staff did their best to manage the influx of packages that arrived during the week of Sept. 4 by redirecting packages to other mailrooms and posting signs alerting students of package delays.
By Madison Fernandez — Contributing Writer
Published: September 25, 2017

Ithaca College’s mail services started off the school year with a tumultuous week, including a buildup of packages and a disorganized distribution process, causing confusion among the campus community.

During the week of Sept. 4, packages were delayed for days, leading to extended pickup lines. The mailroom dealt with a backup they had never seen before, Peter Schlough, manager of mail service operations, said.

However, classes began earlier during the Fall 2016 semester. This left an extra week between the start of classes and Labor Day weekend, a time which he said already leads to a “shutdown” in the mailroom due to carriers not delivering. Unlike previous years, the peak volume that occurred during the second week of classes came on the week of Labor Day, which posed a large amount of work to both carriers and the mailroom, Schlough said.

“Having lost a week to sort of spread out the work overwhelmed the structure we’ve had in place for years to be able to adapt to small shifts, but we just had enormous shifts,” he said.

Due to an influx of deliveries for both Ithaca College and Cornell University, the postal carriers were arriving hours later than normal, Schlough said. This overflow caused staffing problems, since the majority of the mailroom staff is scheduled to work during the peak times when the trucks traditionally come.

In addition to work being carried over to the next day, students were unaware that their packages had arrived. SQBX Tracking, the company that notifies students via email that their package has arrived, did not release package notification emails due to a system failure that lasted about 24 hours, Schlough said. Schlough and his team were unaware of this issue until Sept. 7, which caused a day’s worth of packages to pile up in the mailroom, in addition to the late arrivals and packages carried over from the previous day. Packages had to be held in mail services because there was no more room in the Phillips Hall, Bogart Hall or Circles mailrooms.

Frederick Werner, CEO of Global Parcel Service, the master distributor of SQBX Tracking, said the lack of notification was due to a failed system update that normally runs smoothly.

Once the notifications came through Sept. 8, students began to pick up their packages. Schlough said although the circumstances were mostly out of the control of the mailroom, they did their best to manage the volume by redirecting packages to different mailrooms and posting signs about the delays at the Phillips Hall Post Office.

Freshman Amber Gooden is one of many students who received notification from the service she placed the order with, only to see that her package was not ready for pickup on campus.

“I was waiting on packages, and I didn’t know where to pick them up,” Gooden said. “I kept going to the mail office to see if my package was there.”

Senior Monica Schaffstall, a student worker at the Phillips Hall Post Office, said extra workers came in to work more hours to deal with the backup.

“I knew that it was going to be crazy busy,” she said. “Especially when people were ordering a ton of textbooks early on.”

Traditionally, textbooks would be ordered from one service, and thus shipped together. However, with the rise of services such as Amazon Prime and Chegg, textbooks ordered online from various outlets tend to be delivered one at a time rather than in bulk, which causes more work for the mailrooms.

“We’re working with a model that’s decades out of date,” said Schlough. “I feel like we’re stretched to the maximum of what we can actually accomplish.”

As of the week of Sept. 11, the functions of the mailroom were back to normal, with the normal number of packages for September, approximately 4,000 deliveries per week, coming on time.

Schlough said he would be prepared if a situation like this were to happen again since he had experienced it before, but that it would truly require a reinvention of the mailroom system with more supervision, more student workers and larger budgets for student wages. Schlough also said there are inadequate facilities for such extreme cases and that he hopes some less–utilized spaces on campus can be converted into a larger mailroom in exchange for the space that is currently in Phillips Hall.

David Prunty, executive director of auxiliary services, said there is potential for the mailroom to receive more funding. Once the budget cycle opens again in October, Prunty and his team will work with the mailroom staff to evaluate how extra funding would be utilized effectively for the coming year. However, if the budget is increased, it would be used for mailroom staff rather than improving the mailroom facilities, since facilities updates are dependent on the space available on campus.

The United States Postal Service carries hundreds of thousands of letters and packages every day, but it is carrying a heavier weight as well — a massive deficit which has the agency considering massive changes.