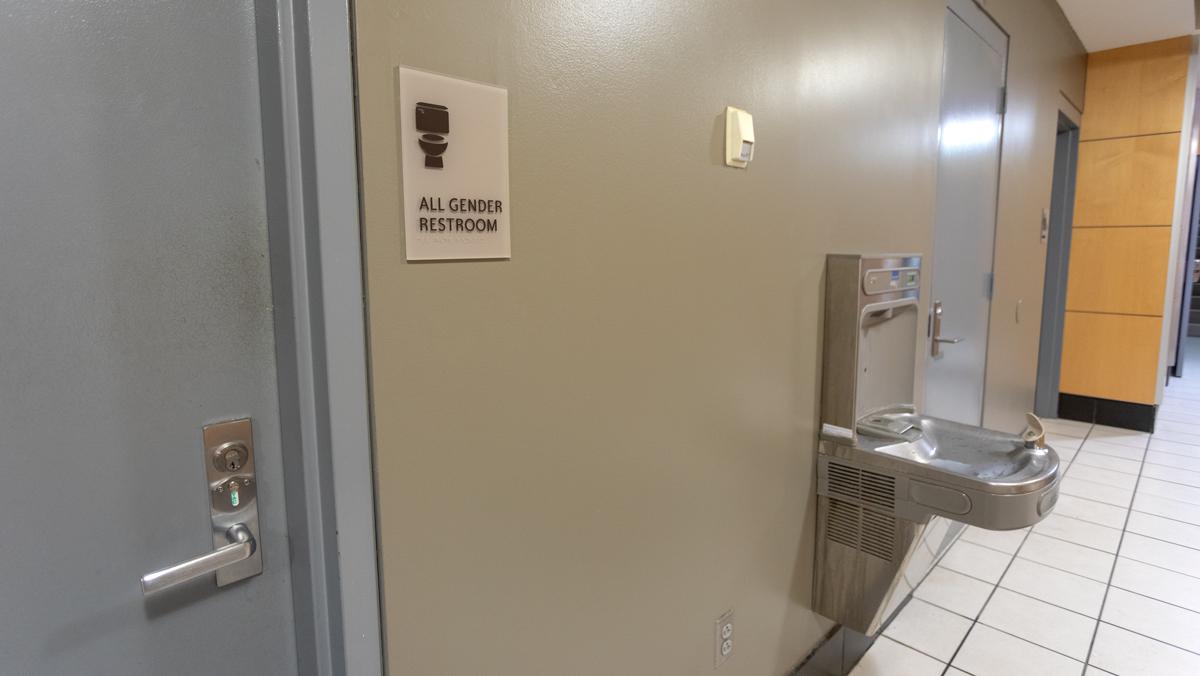 Elias Olsen/The Ithacan
A men's bathroom on the second floor of the Roy H. Park School was converted into a gender-neutral bathroom Sept. 25.
By Sam Haut — Staff Writer
Published: October 10, 2018

In the Roy H. Park School of Communications, one of the men’s bathrooms on the second floor was converted into a gender-neutral bathroom Sept. 25.

Gayeski said facilities usually creates a third bathroom in between two others that acts as the gender-neutral one, rather than convert one of the already existing bathrooms. With the Park School, Gayeski said she wanted to have an extra bathroom to be gender-neutral, but because of space requirements, it is difficult to accommodate one due to limited space in the building.

“We are so out of space,” Gayeski said. “This building was designed for about eight or nine hundred students, and we’re at 1,800. We are literally looking into closet space to see where we can make more offices and things. It would be nice to have more bathrooms. I have no idea what you’d have to lose. You’d have to lose a classroom or something, and we can’t do that either.”

Gayeski said having gender-neutral bathrooms are good for the college because they support inclusion.

“We want to be LGBTQ–sensitive, friendly, welcoming,” Gayeski said. “It’s very important we appreciate diversity and inclusion and make everyone who uses our facilities feel comfortable. Everyone benefits when we show that we appreciate diversity. I think even people who are not using that, they see that it’s here and know that this is a place that supports diversity and inclusion.”

Gayeski said to convert the bathroom to gender-neutral required adding a lock to the bathroom door, which cost over a thousand dollars.

Senior Marissa Booker said they are pleased with the change. They said they reached out to Gayeski about creating a gender-neutral bathroom and would like changes like these to occur more often. They said they also spoke with facilities.

“Ideally, we would live in a world where genders truly are equal,” Booker said. “I don’t know if Park is ready for that. It’s really exciting that something I was told couldn’t be done, that requires major renovation happened, in a matter of weeks, from just continuing to ask and insisting that it was something simple as changing a sign.”

Booker said having more gender-neutral bathrooms is helpful for those who do not identify within the gender binary.

She said it came up at a faculty meeting and that everyone at the meeting agreed that it was an important issue. She said she crafted a letter to the dean with Elisabeth Nonas, associate professor in the Department of Media Arts, Sciences and Studies.

“It seemed like there was definitely a surprisingly quick affirmation of the need and a temporary solution was created,” Koschmann said. “I know there is a move towards trying to create more gender-neutral bathrooms on campus. Dorms have them, and I think they’re trying to get all the buildings to have gender-neutral bathrooms that are accessible without compromising the need for a certain number of gender–specific bathrooms.”

Koschmann said it is important to have gender-neutral bathrooms for everyone to be able to coexist in a college environment.

“If there are people who do not identify with the two genders that we have bathrooms for, then we should be accommodating that,” Koschmann said. “We can’t say ‘Oh, you don’t identify with a specific gender, then you can’t use the bathrooms in Park.’ You just can’t do that. It’s important to have a facility that anyone can feel comfortable using.”

Freshman Emma Mittiga said having gender-neutral bathrooms is important for people who are transitioning.

Mittiga said it is easier if a bathroom is changed to a gender-neutral one rather than creating an all new bathroom.

“I think it’s probably better if they change,” Mittiga said. “It’s just easier. You don’t have to put in new plumbing and just switch a sign out. And you have all the facilities you need already, and it’s already going to be the correct size.”

Senior Dylan Shepard said it would be better to create a new bathroom than convert a current bathroom to a gender-neutral bathroom.

“You shouldn’t really take away from any one party, it’s more about creating a space that caters to another party,” Shepard said. “You have to make sure everyone’s comfortable, so if you take away a bathroom that’s designated for a certain gender and you make it a gender-neutral bathroom in a populated spot, while that might be okay with some people, it’s not going to be OK with everybody.”