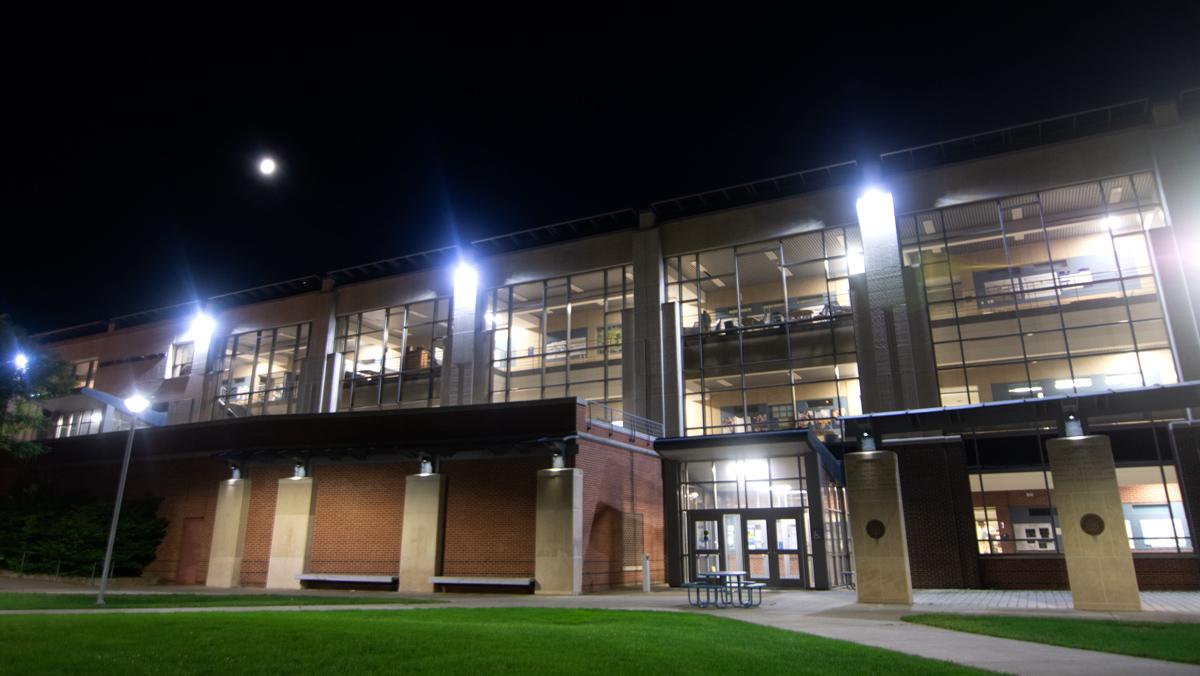 Ted Zerivitz/The Ithacan
The Office of Energy Management and Sustainability will be installing new lighting fixtures and controls in the Center for Natural Sciences to make the building more energy efficient.
By Ashley Stalnecker — Staff Writer
Published: September 17, 2018

After an energy audit within the Center for Natural Sciences at Ithaca College, the Office of Energy Management and Sustainability plans to upgrade some lighting fixtures and controls within the building to improve its energy efficiency.

Greg Lischke, director of energy management and sustainability, discussed these plans with a small crowd of faculty and staff members at an information session Sept. 12. Lischke and Kailash Viswanathan, vice president of operations at GreenerU Inc., an engineering consultant company for college campuses, briefly went over the results from the CNS energy audit during Summer 2018 and outlined the college’s plan for improving the building’s sustainability. The professors and staff in attendance raised questions throughout the presentation concerning their respective research projects and the effects the lighting may have on them.

Last year, the college conducted an energy audit of CNS to determine which systems in the building were using the most energy, so the college could make those systems more energy efficient and sustainable. The CNS building is the highest user of energy on campus, largely because of its use of lighting, roof exhaust fans and air handling units.

Last summer, the GreenerU team assisted Lischke in completing an energy audit of the CNS building to identify rooms and lighting fixtures in need of improvement. Lischke said many of the light fixtures in CNS are nearing the end of their life span and would need to be replaced in the near future anyway.

Rooms will also receive occupancy sensors to detect motion. The lights will automatically turn off after the sensors detect 15 minutes of inactivity. That setting, Viswanathan said, can be adjusted to add or decrease the amount of time that will pass before lights shut off depending on the room users’ preferences.

The occupancy sensors will also detect daylight, allowing the lights to automatically and gradually adjust to the changes in daylight within the room. This will make the energy use in CNS more sustainable because lights will not be on when the rooms are not in use, and the light will be dimmed according to the amount of sunlight coming through the windows in a room.

Faculty will also be able to adjust the lighting in the room using a remote control rather than the toggle switch that most rooms currently have. The controls will allow faculty to dim the lighting according to their preferences. Viswanathan said the faculty member can task tune the controls to create favorite settings so they do not have to constantly adjust the dimness in the room. Each fixture can be adjusted wirelessly rather than all or a group of lights being controlled by one switch.

Lischke said the total cost for the project is expected to be approximately $525,000. He said the team will be working through different incentive programs to provide additional rebates that may drive down the cost. Once the lights are installed, he said they expect to receive a rebate from the New York State Energy Research and Development Authority and New York State Electric and Gas for highly efficient lights.

A few samples of the light fixtures and occupancy sensors were placed in the office of Leann Kanda, associate professor and chair in the Department of Biology.

“I love the quality of the light and the brightness that is available,” Kanda said. “The only thing that has really taken some getting used to is the fact that it is no longer this toggle switch.”

Viswanathan said this depends on the location of the occupancy sensors. He said it works better if the device is placed on the ceiling than if it is placed on the wall. For labs, there will be multiple sensors to detect motion.

Lischke said because CNS houses research for many professors and students, the team is mainly focused on making sure the light improvements do not disturb projects.

“The research piece is the most critical one,” Lischke said. “I would be really disappointed if we fumbled something there.”

Jean Hardwick, a Dana professor in the Department of Biology, voiced concerns that some labs or rooms do not have windows to allow any daylight in. If students or professors are working at night on a lab, she said, she would not want the lights to automatically turn off with valuable lab equipment running.

Kanda then voiced concerns that certain research projects ongoing in certain rooms would need lighting at all times. For example, she said one of her projects involves monitoring a hamster within a lab. While there may not always be people present in the room that the occupancy sensor can detect movement, there will still be a need for light in those circumstances.

In response, Lischke and Kanda arranged plans to talk directly with each faculty member with a research space to compile a list of rooms that would need specific customization. Viswanathan said rooms like Kanda’s, for example, would most likely have the occupancy sensor turned off completely so the lighting could be controlled manually.

Correction: A previous version of this article incorrectly stated that the new lights to be installed in the Center for Natural Sciences will be high fluorescents.