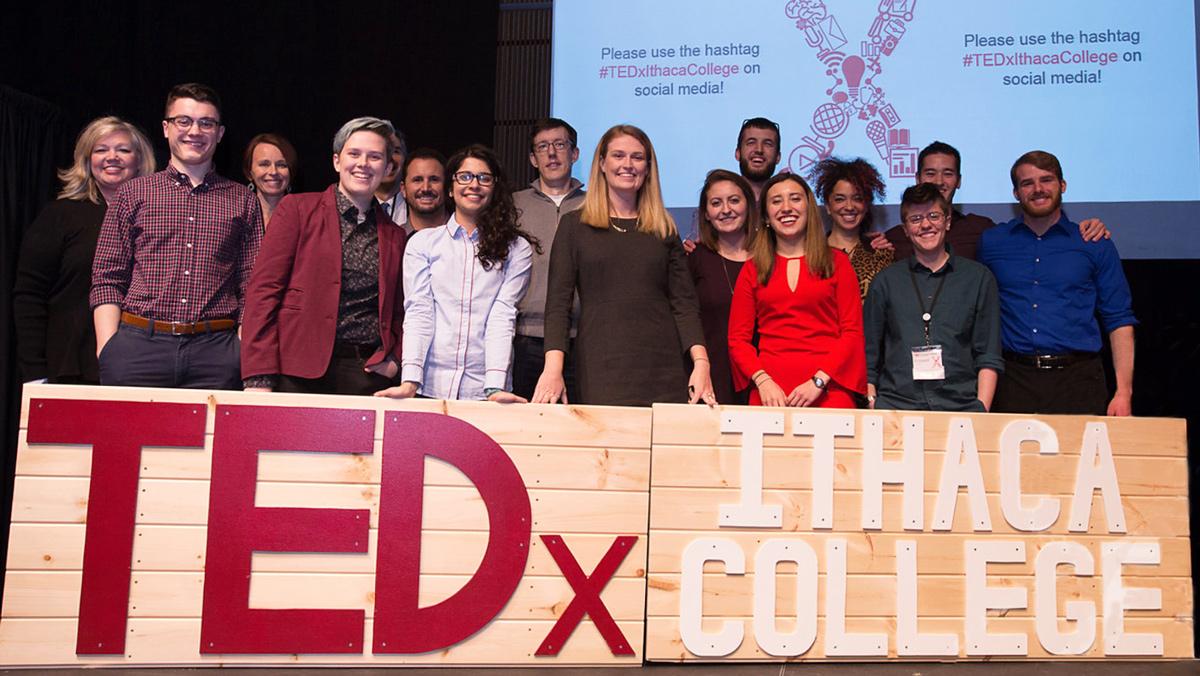 Courtesy of Elena Haskins
TEDx is a branch of the TED speaker series. The club is planning a one-day TEDx event in March with a lineup of students, faculty and members of the greater Ithaca community, which will officially be announced in the spring semester.
By Julie Dannevig — Staff Writer
Published: November 6, 2019

Ithaca Talks, a new student organization, is working to bring the TEDx event back to Ithaca College in Spring 2020.

TEDx is a branch of the TED speaker series. Its purpose is to facilitate the process of hosting TED conferences within smaller communities with local speakers. To use the TED name and host a TEDx event, the host must apply and be accepted to receive an organizer’s license.

The club is planning a one-day TEDx event in March with a lineup of students, faculty and members of the greater Ithaca community, which will officially be announced in the spring semester. Speakers will be focusing on topics pertaining to the event’s “2020 Vision” theme, which involves social or environmental issues that speakers deem important to think about for the upcoming decade, said sophomore Lizzie Smith, Ithaca Talks secretary.

“I think it’s really great to pause and think about where we’re heading in the future and where our planet should be and what our society should be,” she said.

The TEDx speaker series was first held at the college in 2014. Sophomore Dan Mailloux, Ithaca Talks’ license coordinator, said that because of issues with organizing the event, it was not offered after 2017. He said his goal for the 2019–20 academic year is to effectively and thoroughly organize the event to bring it back successfully.

“We want to raise enough funds to have the event be as professional and as clean as possible,” Mailloux said. “I know in years past it has been successful, but it hasn’t been to the level that they wanted.”

Mailloux said that he received a TEDx organizer’s license after applying last spring. With this, he is helping to organize and host the conference. Every year, the license must be renewed to continue hosting the events.

“I think a lot of students, faculty and staff have these stories and these ideas that they don’t usually have a platform for, so that’s what we’re trying to provide,” Mailloux said.

The TEDx organizer’s license offers resources, like instructional guides and videos, with tips on how to host the conferences. It also allows organizers to promote by using the TEDx name.

Junior Kat McSherry, president of Ithaca Talks, said the club was created as an outlet for students who are looking to speak publicly about issues they are passionate about.

McSherry said Ithaca Talks is looking to host the conference on March 1. The event will be held in the Emerson Suites. Due to licensing regulations with TED, space will be limited to 100 people per act, and tickets, which will be available to buy in the spring semester, will be required to attend. Students must pay for the tickets, but the price has not been determined yet.

Mailloux said the theme is broad and speakers can interpret it how they wish. He said topics with a focus on social or environmental issues pertaining to Ithaca or the greater world are all possibilities.

“The issues we see now and how we want to address them going forward, how we see the world ahead of us,” Mailloux said. “I think that opens the door for a lot of speakers in a lot of different fields with a lot of ideas.”

Mailloux said speaking roles are open to students, faculty and members of the community. Students interested in speaking must apply through an application that will be on IC Engage next semester.

“We want students to come forward who have these thoughts and ideas and put them on display,” he said.

Edward Schneider, associate professor in the Department of Strategic Communication, was a speaker at the college’s TEDx event in 2017. Schneider said the presentation allowed him to share an aspect of his field with professors and students who may not encounter that topic in their day–to–day lives.

“It helps you learn about other people’s research, and for our students, it’s a great chance to put something on your resume,” he said.

Smith, who is working as the executive producer for the conference, said students looking to get involved with the program can also work behind the scenes with event production and management.

“It’s a great experience in event design and event planning,” she said. “It’s great to work as a team and put on this giant project.”