Brian Dickens has been chosen as the new vice president of human resources at Ithaca College. He will begin his position this summer.

Dickens was officially named to the position Feb. 26. His responsibilities at the college will include overseeing benefits and compensation, payroll, and diversity and inclusion, according to a press statement from Dave Maley, senior associate director of media relations at the college.

Dickens previously worked at Texas Southern University in Houston, where he was first the executive director and later associate vice president for human resources and payroll services, according to the release.

Dickens has 25 years of experience as a university administrator and more than a dozen years working in human resource development and management, according to the statement. 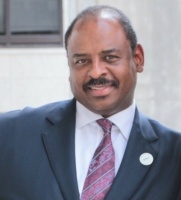 When he visited the college to meet and speak with faculty and staff, Dickens said, he also met students who were staging a sit-in protest in the Peggy Ryan Williams Center.

Dickens said higher education is changing rapidly and institutions must be ready to adapt to the changes.

“I don’t view it as good versus bad,” Dickens said. “Change, if confronted well and dealt with from an open mindset, can be extremely positive. If focus is from very limited viewpoint or an exclusive viewpoint, it becomes that in and of itself.”

John Rosenthal, professor of mathematics and member of the search committee, said he was impressed with Dickens in the committee and public interviews.

“What stood out was his eagerness and interest,” Rosenthal said. “He has a strong background in many … aspects of HR.”

Dickens holds a doctorate in educational administration and human resource development from Texas A&M University and a Master of Arts in counseling and Bachelor of Science in biology from Prairie View A&M University.

He succeeds Mark Coldren, who left the college in June 2015 to take the position of associate vice president for human resources at the University at Buffalo. Coldren and Dickens served on the national board of CUPA-HR together. However, Dickens said Coldren was not involved in his decision to apply to the college.

This post was updated 6:30 p.m. March 1 with Brian Dickens’ and Jason Rosenthal’s comments.