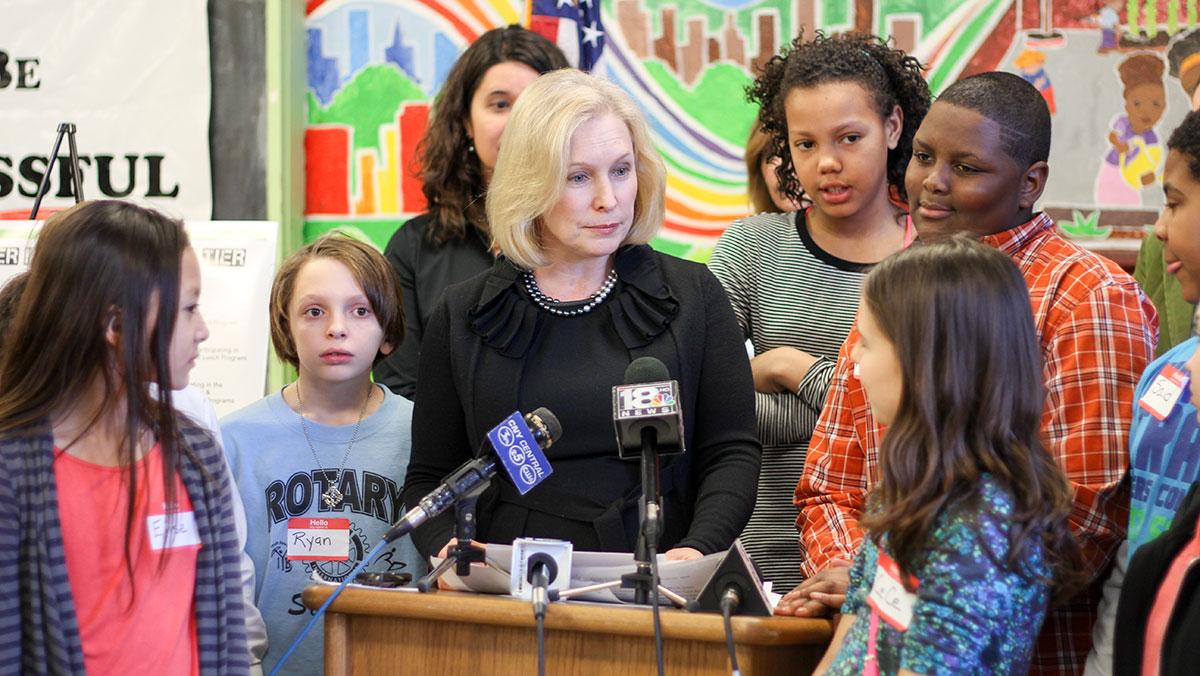 Speaking at Beverly J. Martin Elementary School on West Buffalo Street, Gillibrand stood with a group of fifth graders as she addressed the upcoming debate over the Child Nutrition and Special Supplemental Nutrition Program for Women, Infants and Children Reauthorization process. The Healthy, Hunger-Free Kids Act is set to expire in September, so Gillibrand is pushing for an increase in the nutritional levels of school meals before the renewal process begins.

“As we prepare to debate child-nutrition standards, we need to make serving healthy food at our schools a priority,” Gillibrand said.

Throughout the press event, Gillibrand involved the fifth-grade students by asking them questions, such as if they thought ketchup should be designated as a vegetable. The students shouted a collective no, with one student pointing out that ketchup is mostly corn syrup.

“So we want to make sure ketchup is not considered a vegetable,” Gillibrand said. “We want to keep carrots and green beans and broccoli as the vegetables in our school lunches. We don’t want 6-year-olds deciding our health care policy. We want parents to be in charge.”

Gillibrand spoke on the history of providing nutritious school lunches, starting with the National School Lunch Act of 1945, signed into law by President Harry Truman.

Gillibrand also addressed the Summer Meals Act, which she hopes to expand to provide more children healthy food during the summer at both educational and enrichment programs. The legislation would also provide children with transportation to meal sites. According to a press release from Gillibrand’s office, the act would lower the threshold to allow areas with 40 percent or more of students receiving free or reduced lunch to be eligible for the program, rather than the current threshold of 50 percent.

Travis Brooks, Greater Ithaca Activities Center program administrator, said over the past 10 years, he has noticed children coming to summer programs hungry in the morning. He emphasized the importance of providing meals for all children who qualify.

“When you’re fortunate and you can provide breakfast, lunch and dinner to your family, I think sometimes you forget that there are so many families that can’t do that,” Brooks said.

Natasha Thompson, president of the Food Bank of the Southern Tier, said children receive breakfast and lunch during the school year, but miss those meals during the summer if they are not enrolled in a camp or enrichment program.

“What a lot of folks don’t know is that nearly 40 percent of the people we serve through our member agencies are children ages 18 and younger,” Thompson said. “What we’ve noticed is that a lot of our pantries see a spike during the summertime.”

Amie Hamlin, executive director of the New York Coalition for Healthy School Food, said she is encouraged by Gillibrand’s efforts.

Hamlin said this effort is not an overreach of government but necessary for the future of the country.

“We need more funds for the healthy lunches,” Hamlin said. “The children truly are our future. And we really have to not just say it, but show that it’s true.”

Gillibrand said she will continue to be a supporter for more nutritious food in schools.

“Kids get it,” Gillibrand said. “They fully understand this issue. They understand how nutritious foods play in their lives. They know what’s good for them, but unfortunately Washington doesn’t.”