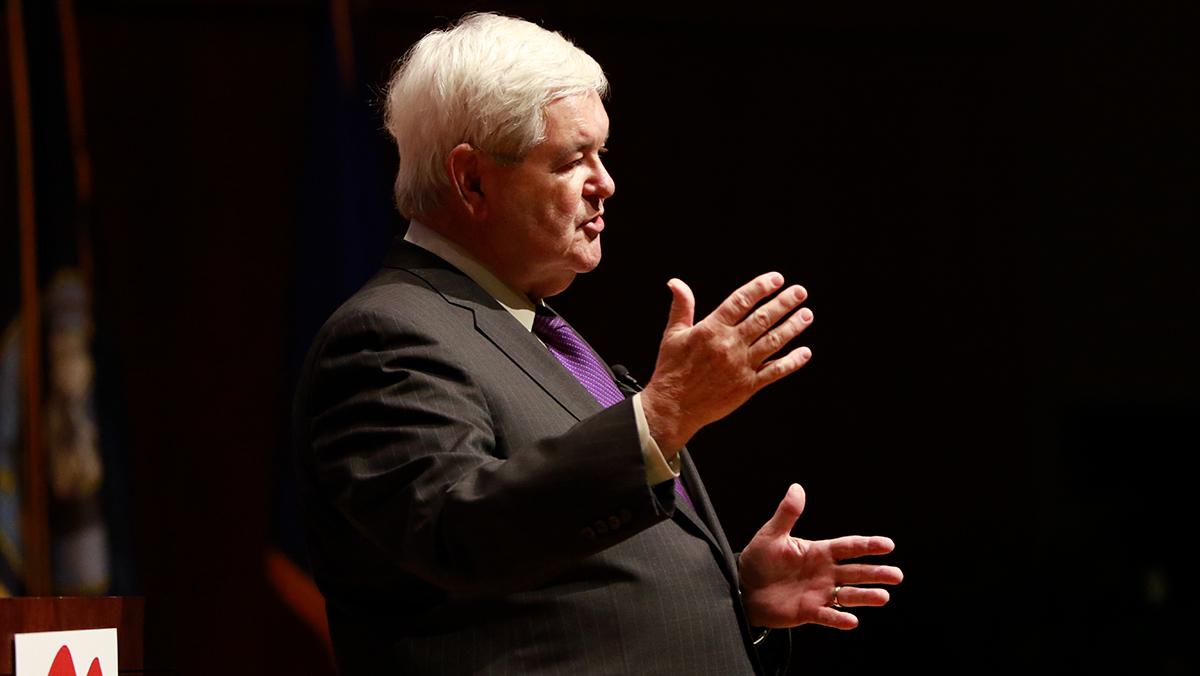 In effort to close the divide between liberal campuses and the new Republican administration, former Speaker of the House Newt Gingrich came to Cornell University to discuss President Donald Trump’s campaign strategy and how the administration plans to move forward.

Gingrich was invited by the Cornell University College Republicans group to speak March 22 at Call Auditorium. A few protesters stood at the entry, which was guarded by police officers, but only those with a Cornell student ID and ticket were permitted to enter. The group decided to take extra precautions after protesters interrupted Rick Santorum, former Republican senator for Pennsylvania, when he spoke at Cornell last fall, said freshman Madi Gregg, a member of the Cornell Republicans’ executive board.

“We’re hoping that they can see, for one, a full speech this time without any protests,” Gregg said. “We also really do hope that Gingrich can give some insight to what’s going on for things that might seem questionable with the Trump administration … give some perspective of what it’s like to be speaker of the House, what it’s like to run for a presidential campaign — just in general some good discourse.”

Before introducing Gingrich, the university’s faculty emphasized the importance of transparency and expression of all political viewpoints. Once Gingrich took the stage, he expanded on how different ideologies are important to represent in an academic setting and said a key aspect of college is to have a flow of ideas, debate and discourse. He went on to discuss the complexity of Trump’s campaign, comparing it to the controversial presidency of Andrew Jackson, who he said acted as a disruptive force to the political status quo, like Trump.

Gingrich described the president’s demeanor and how it aided him throughout his campaign. As a businessman, it was easy for Trump to make his way into the media, but Gingrich said that his “big ego” personality pushed it a step forward. While Gingrich admitted that fewer tweets may be a better strategy for the president, he said all Trump had to do was tweet, and the media would fixate on him automatically, bringing him free publicity.

Another campaign strategy Gingrich noted was Trump’s employment of his marketing skills to brand the competing candidates. Labels such as “Low-energy Jeb” and “Little Marco” helped Trump knock out the other possible nominees, Gingrich said.

“Trump doesn’t attack you — he brands you,” Gingrich said. “His first victim is Jeb because Jeb was the most dangerous. And Jeb becomes ‘Low-energy’ Jeb.”

Gingrich offered approximately 30 minutes after his speech to answer questions from the audience. Topics like the war on drugs, health care, race, and women’s reproductive and workplace rights were all discussed. Cornell sophomore Jill Warren, who had also attended Santorum’s speech, said she was very impressed by Gingrich’s tolerance of oppositional views and that he offered a perspective that helped her understand the new administration’s objectives.

“As a victim of assault, I have different perspectives on [Trump] as a person, but it actually made me more receptive of what Trump has to do without initially discounting it,” Warren said. “Even though, up until now, I really don’t support what he’s doing, it gave a new outlook on it, which I appreciated to hear.”

Gingrich said he was impressed by the positive tone and attitude of the audience. He said he had been concerned about visiting because of past intolerances of speakers at liberal-leaning campuses.

Gingrich said that whether or not the administration will be beneficial to the overall progress of the United States is yet to be determined.