No set timeline for installation of sidewalks on Danby Road 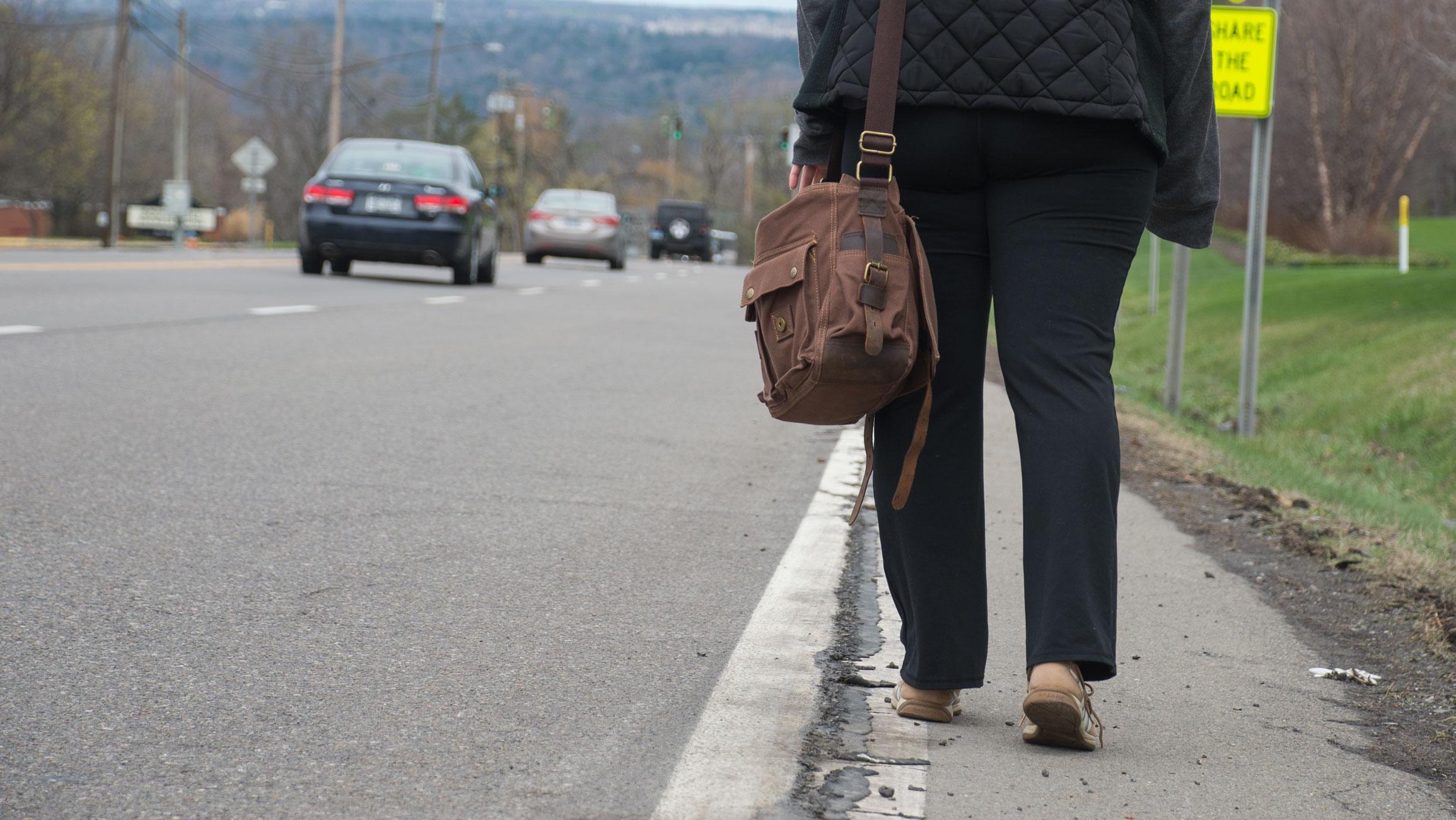 Sam Fuller/The Ithacan
Some Ithaca College students have sustained injuries or felt unsafe walking along Route 96B — Danby Road — without sidewalks. For almost a decade, the Town of Ithaca has been considering a plan to install sidewalks on Danby Road, however these plans have never come to fruition.
By Michael Pyskaty — Staff Writer
Published: April 23, 2016

Walking alongside New York state Route 96B on a brisk Friday evening in January with two of her friends, Allison Tindel, a freshman at Ithaca College, was struck by a vehicle on the side of the roadway.

“We were in the white line walking home, and it was a tow truck that came up the way and hit my arm, and then I went flying, and I had to get 21 stitches,” Tindel said.

For almost a decade, the Town of Ithaca has been considering a plan to install sidewalks on Route 96B, commonly known as Danby Road. However, these plans have never come to fruition, even after a public hearing on the Route 96B Pedestrian Corridor Study, held in December 2015.

The goal of the Route 96B Pedestrian Corridor Study, according to the town’s website, is to develop a plan to make the movement of pedestrians in the corridor safer, and includes recommendations for alternative sidewalk routes, crosswalks and upgrades to traffic control devices.

Susan Ritter, planning director for the Town of Ithaca, said proposals for a sidewalk on Danby Road have been in the town’s transportation plan since at least 2007. However, the cost of the project, which is over $1 million, has prohibited the town from moving forward without a study. Based on the preliminary findings of the study, Ritter said, the town is considering adding to the plan by building a sidewalk all the way to King Road, 1.6 miles away from the city line, instead of just to the college. There is no timeline for construction.

The New York State Department of Transportation partially funded the study and could possibly assist the town with funding for the actual project, Ritter said.

“Usually it’s a shared cost, and what we’re doing right now is looking for grants, money that would come from the state, which trickles down from the federal government,” Ritter said.

The delay in plans to install sidewalks has left some students at the college concerned about their safety when walking down Danby Road. Tindel said she believes the prompt addition of a sidewalk would make pedestrians safer.

“I think it needs to be changed immediately because there are students that walk along it all the time,” Tindel said. “If there were sidewalks, it would be perfectly fine for students to walk.”

Freshman Anu Irri said she is glad she has friends with cars so she does not have to walk up the road as often.

“Every single time that I have to walk down that road, I walk in the ditches because I’m terrified of getting hit by a car,” Irri said.

“Students, 21 or not, are going out, and the quickest way of getting downtown if you don’t take the TCAT from many of the upper South Hill streets and from campus is to end up traversing up or down Danby Road,” Recckio said.

Recckio has also personally experienced being a pedestrian on Danby Road.

“I have walked up the street and felt unsafe probably on 10 occasions, whether it’s been going out downtown and not wanting to pay the ridiculous price for the cab to come back up, or whether I just want to go for a walk and that’s where I end up,” Recckio said.

The town has concerns about pedestrian safety as well. According to the NYSDOT, because of the lack of sidewalks, pedestrians are forced to walk along the shoulders of the road, creating “significant safety concerns.” It also cites a relatively high speed limit and vehicle traffic in excess of 8,600 vehicles per day as additional hazards.

Gene Cilento, public information officer for the State DOT Region 3 office, said the town has not completed a speed study, which is an analysis of data collected from traffic patterns on Danby Road.

“The Town has not requested a speed study be done for this project,” Cilento said. “The study consultant could do it, or if requested, then we could look into providing this for the town.”

Ritter also shares a concern about pedestrian safety on the road.

“It does not have pedestrian facilities, so I would definitely want to see there being a sidewalk so it would be a safe place for pedestrians,” Ritter said.

Recckio said it is only a matter of time until someone is killed due to the lack of sidewalks.

“It’s shocking to me that we haven’t seen someone hit on Danby Road fatally,” Recckio said.