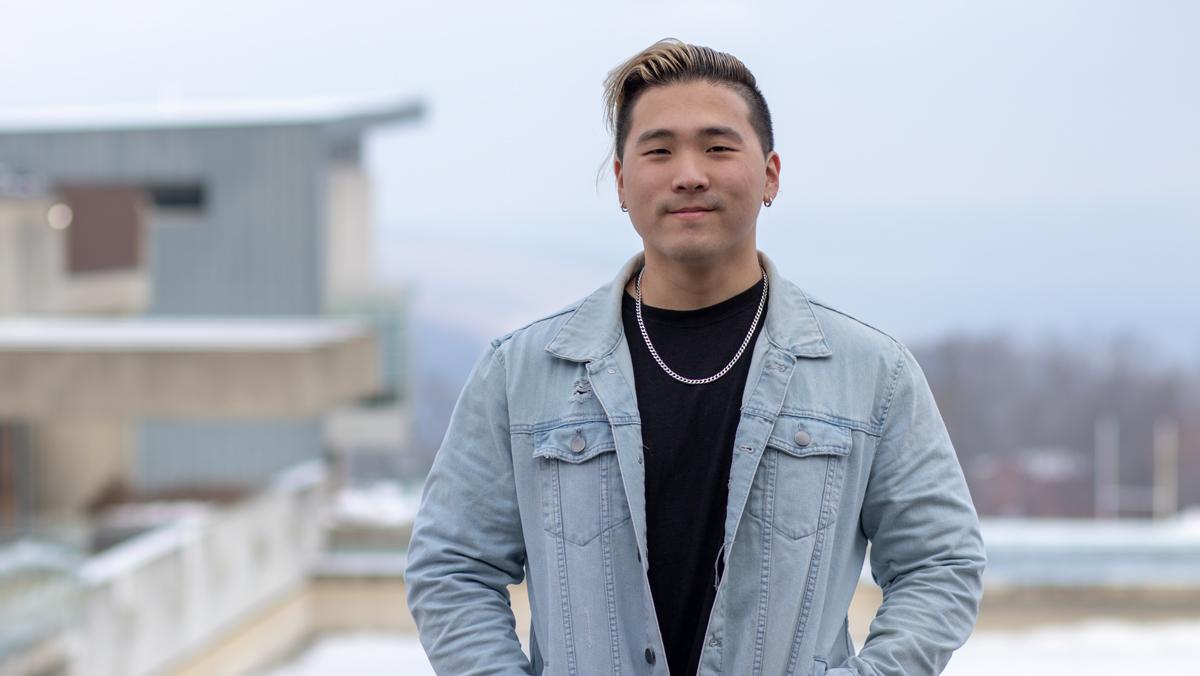 Julia Cherruault/The Ithacan
Sophomore Kelvin Kim gives his perspective on what it it like growing up and going to college in Ithaca.
By Danielle Lee — Contributing Writer
Published: December 12, 2018

When students make the commitment to attend college, most of them look forward to venturing into their new lives, learning to live on their own and gaining a college experience. While many students itch to get out of their hometowns to explore a different place, some stay in the comfort of their backyard.

Over the past five years, the highest number of freshmen attended Ithaca College with local addresses in Tompkins County could be found during the 2015–16 academic year with 66 students. Since then, numbers of local students in freshman classes have dipped but are beginning to rise again.

And while going to college in one’s hometown may not follow the traditional jump from adolescence to academic adulthood, many local students have said they chose to combine their college experience with hometown living to cut down on on-campus living costs while enjoying the comforts of home as they take on new academic journeys.

Of the 6,486 registered students this semester, 248 undergraduates and 36 graduate students have their permanent addresses listed in Tompkins County, said Tinita Wheaton, information systems manager at the Office of Registrar. Nicole Eversley Bradwell, director in the Office of Admission, said the college accepted 65 freshmen and transfer students from Tompkins County for the 2018–19 academic year, an increase from the 49 students accepted in 2017–18 academic year.

Sophomore Kelvin Kim, an Ithaca native, is familiar with the college atmosphere. Kim said that growing up, he was mainly immersed in Cornell University’s college life. He was a member of the university’s breakdance group in the eighth grade and frequently studied in the Cornell libraries with his sister. His family owns Green Castle, an Asian grocery store on Eddy Street in downtown Ithaca, where he was often exposed to the business’s dependency on college students’ academic calendars and day-to-day schedules, he said.

Kim said he enjoys the perks of being a local student because he has many circles of friends and family.

“There’s just an overall comfort of being in your hometown and having the college experience at the same time,” Kim said. “I love being able to combine my knowledge of my community with the college community and being independent but also having the option to be ‘babied’ by my family.”

He also said grants and financial aid impacted his decision to attend the college.

Senior Natasha Yalanzhi said she never pictured herself going to college in her hometown. She always imagined college like the movies, packing up and moving far away, she said. But she said she decided to save money on room and board by living at home.

Yalanzhi said her knowledge of the Ithaca area allowed her to acclimate more easily to college than most people coming from outside of the area.

“I think out-of-state people are always more excited to experience college, especially in Ithaca since there is so much to do,” Yalanzhi said. “Even though I can point people in the right direction or suggest places to go, I don’t get to experience things for the first time the way others do with college, which sometimes makes me feel a little left out.”

But overall, Yalanzhi said she feels lucky to be a local student.

“Not many people get to see one place as both the little town they grew up in and a place where they learned how to be independent,” she said.

Senior Kyra Bean said she transferred to the college from Niagara University during the spring semester of her freshman year. She said she grew tired of the “away-from-home” experience and wanted to save money. The college offered her more financial aid and an opportunity to live at home, she said.

During her time away, she said, she realized that she belonged in her hometown.

“I missed my family,” Bean said. “I feel like I could have the same experience anywhere whether I’m 300 miles away or whatever –– it doesn’t matter.”

Bean said that growing up, she attended Belle Sherman Elementary School in Ithaca and went on class field trips to musical theater productions put on at the college.

“I remember walking back to school with my class from a field trip, and there was vomit on the sidewalk, and my teacher said, ‘Yep, that’s just college students,” Bean said. “That was my first exposure as a local to college life.”

Her father is also an alum of the college, she said.

Senior Joy Smith, a local from Ithaca, said she grew up using facilities and attending events at the college. She said she performed a ballet recital in Ford Hall, and in middle and high school, she attended the Ithaca Talent Education School — a Suzuki Method-based school for violin, viola and cello — and swam for her high school’s club swim team at the Athletics and Events Center. She said her high school graduation was also held in the A&E Center.

Smith said the college was not initially on her higher–education radar.

“I never pictured myself going to IC,” Smith said. “I had never even considered this college until my mother insisted I take the tour. When I did, I fell in love with the college.”

Ultimately, Smith said, she was interested in the school’s physical therapy program and the ability to stay at home and save money, despite feeling like she may miss out on part of the college experience by leaving her hometown.

“It’s hard to get the ‘college experience’ when you still go home to your parents each night,” Smith said. “But if I need comfort, a home-cooked meal or laundry to do, my parents’ house is only 10 minutes away.”

Senior Bretana Turkon said she feels like she got the best of both worlds, growing up in a small town — Trumansburg, New York — as well as a college town. When Turkon had days off from school, she would join her parents, who are both professors at the college, in their offices, sit in on their classes and go to IC Square for lunch.

“I didn’t have to deal with getting to know a new campus or town,” Turkon said. “I already knew where to go grocery shopping and which restaurants and gorges were the best.”

Turkon said she distanced herself from high school friends when entering college because she wanted to feel like she was getting the traditional college experience.

“I wanted to have the experience of making a new life for myself, which was really difficult when my high school and that part of my life is so geographically close,” Turkon said.

She said the college is a great fit for her because of interest in theater arts.

“I go home to snuggle my dog every month or two, I happily accept leftovers from my mom, and I appreciate living geographically close to my parents for perhaps the last time ever –– because who knows where life will take me?,” she said.

As the Department of Environmental Conservation begins to conclude its review on the impacts of horizontal hydraulic fracturing, community members came together to voice their concerns about the controversial process.