Office of Civic Engagement on hold during search for director 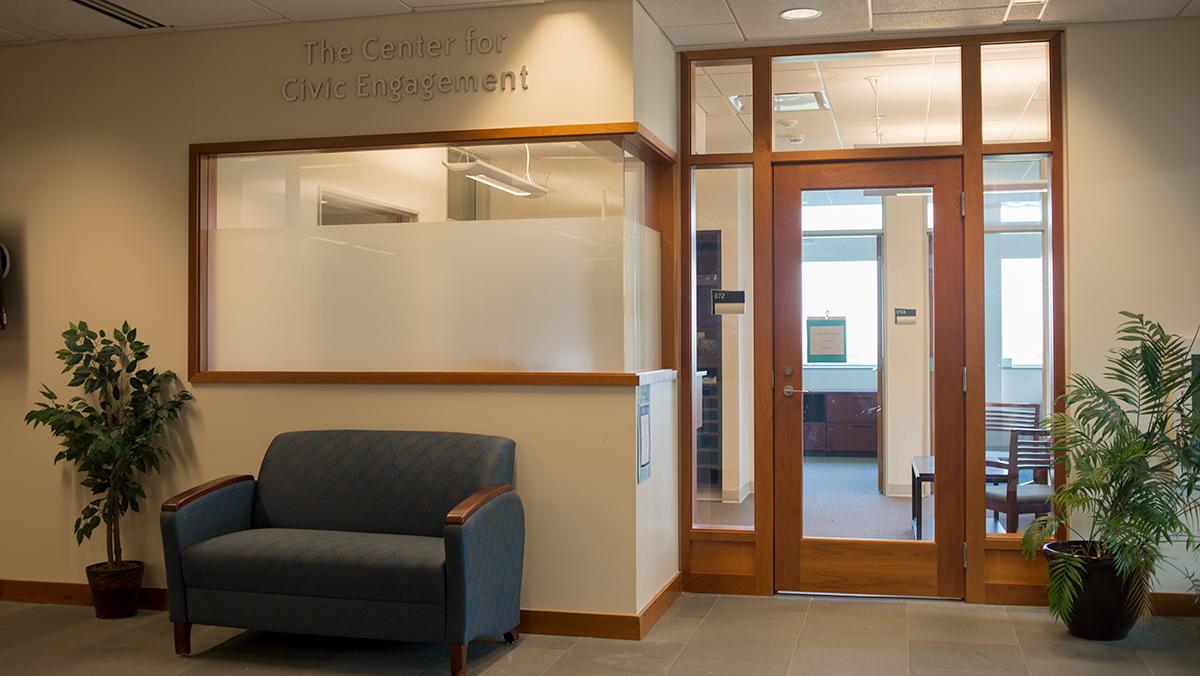 Fernando Ferraz/The Ithacan
A new space for the Office of Civic Engagement has been designated in the Peggy Ryan Williams Center at Ithaca College. However, the office is unoccupied and “on hold,” pending a search for a new executive director.
By Annie Estes, Sophia Tulp — Staff Writer and News Editor
Published: September 28, 2016

The Ithaca College Office of Civic Engagement is currently “on hold” pending the selection of a new executive director.

The office is in transition, and its community service programs and advising will continue operating through the Office of Student Engagement and Multicultural Affairs, said Roger Richardson, associate provost for diversity, inclusion and engagement, and interim chief diversity officer. There is no set deadline for the appointment of a new director.

The office has been on hold since Patricia Spencer, faculty director for service learning in the Office of Civic Engagement, stepped down at the end of the Spring 2016 semester after claiming lack of administrative support from the college.

Spencer said after “egregious contract negotiations,” she decided to resign from her administrative and teaching positions. She said she came to her decision following negotiations over the renewal of her contract for the 2016–17 academic year for her administrative position. In addition, Laurie Worrall, executive director of the Office of Civic Engagement, left the position last semester for reasons not made public, said Don Austin, assistant director of community service and leadership development.

The OCE, which was created in 2012 as a part of the IC 20/20 strategic vision, was designed to help students become involved with the community by providing opportunities to volunteer locally and initiate service-learning courses, according to the college’s website. The OCE has established connections with several off-campus organizations such as the Cayuga Medical Center and the MacCormick Secure Center, a youth correctional facility.

“Education will be further enriched through residential life programming, extracurricular activities, global educational experiences, civic engagement, and mentorship and advisement,” the site states. “IC 20/20 will ensure every facet of a student’s experience at Ithaca College is designed to prepare him or her to be successful in tomorrow’s reality: an integrative education for a complex, integrated world.”

Concerns about prioritization of the OCE

However, despite its role in the IC 20/20 strategic vision, the office is currently not functional as the search progresses. Faculty members also voiced concern in a May 2016 open letter that the administration failed to adequately support civic engagement at the college, despite its being a cornerstone of IC 20/20.

“The administration has publicly endorsed the idea of community-based learning but has never adequately supported programs,” the letter stated. “ … Meaningful engagement with the diverse community that surrounds Ithaca College could be one way that the college enhances the education of its students. It is a pity that the leadership of the institution does not have the vision for making this happen.”

Michael Smith, associate professor in the Department of History, was a co-signer of the letter. He has previously taught a service-learning course for the Honors Program as well as individual service-learning courses. Smith said there is a disconnect between the emphasis the college says it places on civic engagement and the actual support it gives these programs.

“The analogy I used in the farewell reception for Pat last spring was, ‘I’m increasingly feeling like Charlie Brown, and IC is holding the football,’” he said. “They keep making these overtures for finally institutionalizing service-learning and supporting it, then pulling the ball away.”

Smith said issues with the “risk-management” system at the college — the process that campus organizations and departments need to go through to travel off campus as well as obtain motor vehicle record checks and student driver safety classes — coupled with a failure to support adequate staffing in the office, are roadblocks to making civic engagement the priority it is said to be.

“This is part of a very consistent pattern at the college,” Smith said. “There’s a lot of lip service to the idea of community-based learning and service-learning … but not the follow-through with resources, with infrastructure. … I feel it would be much more honest for the institution to say, ‘Look, we can’t support this the way it needs to be supported now.’”

“Because we lost both the course and her overall support, any senior this year who had not completed civic engagement had to have it waived because fundamentally we could not support it,” Pfaff said. “We could not require something we didn’t have the support for.”

Pfaff also co-signed the faculty letter last spring and said these concerns still remain. Specifically, he said anybody who comes into Spencer’s position will have to rebuild the critical relationships with community partners, which could harm some projects. He also said the change from a faculty position, like Spencer’s, to a staff position makes the academic background to oversee and support service-learning more challenging.

“My concern right now is that the office has nobody there,” Pfaff said. “Anybody that comes in has to do a fair amount of relationship building with both the community and the faculty. … there’s no natural connection to the academic side of the house with that position any more …  so I don’t know how long it’s going to take to get that office back to where it was, if it will get back to where it was.”

Search for a new director

A space for a new office has recently been designated in the Peggy Ryan Williams Center; however, it will not be occupied until a new director is hired, Richardson said. He said the phone number and email address that are listed on the college website are also not currently functional, though students who wish to become involved with the OCE while the office is on hold can contact either Austin or himself.

Austin and Alicia Swords, associate professor of sociology, are co-chairing the search for a new director. Richardson is the hiring supervisor.

Richardson said the search, which is open to internal and external candidates, began at the beginning of the summer with an announcement sent to the Office of Human Resources that the college was looking to hire a new director. He said the college is looking for someone who has knowledge, expertise and experience in working in the field of community service.

On-campus interviews took place Sept. 7–9, Austin said. Richardson said the search has been narrowed down to three candidates. Neither Richardson nor Austin is aware of when the candidate will be selected.

Swords, who served on the faculty steering committee for the OCE, said even before the office was on hold, it was still in the process of being developed. She said the goal is to eventually transform the office into the “Center” for civic engagement, which will be more of a “hub” for building relationships among students, faculty and external community organizations.

Swords said details about the search are not currently made public, but information will be released in the near future.