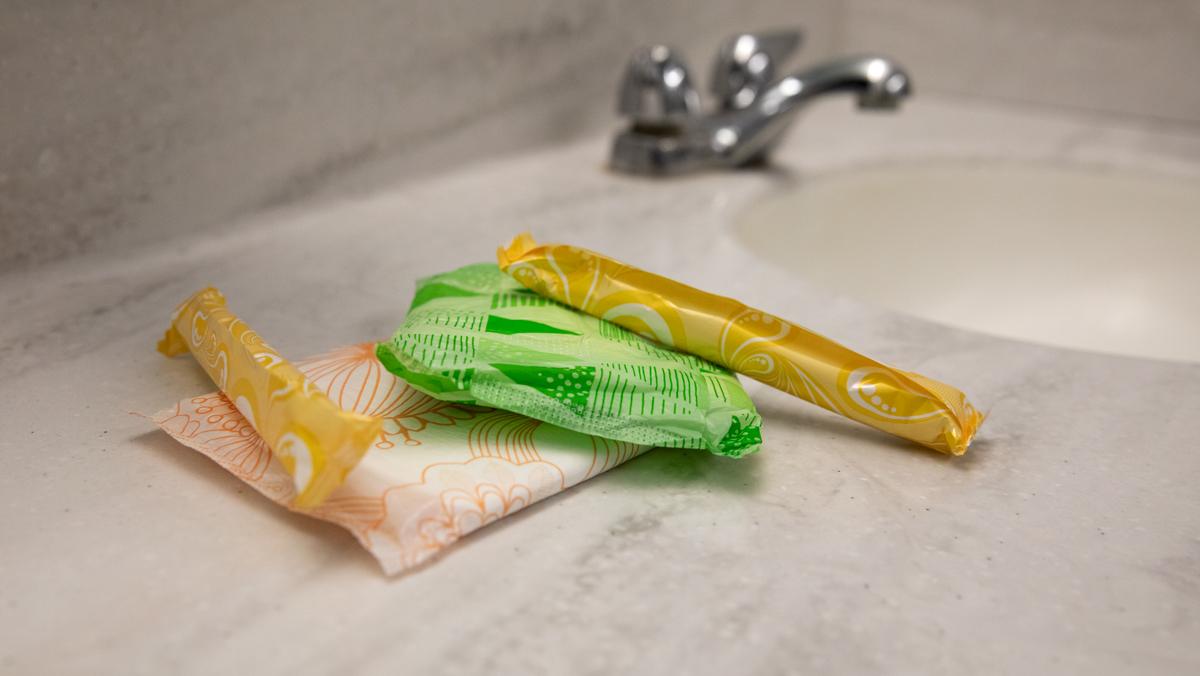 Julia Cherruault/The Ithacan
The Office of Facilities will be offering free menstrual products in the bathrooms of the Campus Center and the college’s library to test out the feasibility of providing free pads and tampons in all campus bathrooms.
By Rachel Heller — Contributing Writer
Published: October 3, 2018

The Office of Facilities will be conducting a pilot program during Fall 2018 to test out the feasibility of providing free pads and tampons in Ithaca College campus bathrooms.

Tim Carey, associate vice president of the Office of Facilities, said the pilot will take place in the bathrooms of the Campus Center and the college’s library by Oct. 18.

The pilot will assess the number of products that students use to determine how much the Office of Facilities will need to spend on the initiative. The goal is to offer free menstrual products in all campus bathrooms that currently have menstrual product coin dispensers, Carey said.

Carey said the Office of Facilities will move forward with offering free menstrual products regardless of the initiative’s cost.

“That’s the purpose of the pilot, just to determine how much we need to budget going forward,” Carey said. “Can we afford to do this immediately, or do we need to do this a little bit slower so that I can request more funding?”

The next phase of the pilot will be assessing the dispensers in other buildings on campus to determine the cost of modifying or replacing them, Carey said.

The pilot comes after the Student Governance Council passed a bill Feb. 27, 2017, which proposed that free pads and tampons should be made available in all campus bathrooms, including men’s bathrooms, to be inclusive of noncisgender students.

Jallow and Foote are no longer in collaboration with the Office of Facilities, as they both graduated from the college in 2018.

“We had a very positive exchange of ideas and a good conversation, and we are pleased to be pursuing the pilot,” Carey said.

At the start of the Fall 2018 semester, the Ithaca College chapter of Planned Parenthood Generation Action started a campaign to get free menstrual products in campus bathrooms.

Sophomore Camryn Viola, secretary of Generation Action, said Generation Action’s campaign might be more inclusive than the office’s current plan because it plans to place products in more gender–neutral spaces. Generation Action wants to supply menstrual products in all women’s bathrooms and gender-neutral bathrooms, and potentially, in a nongender specific space in a campus building that is open 24 hours. The club knew about the SGC bill advocating for free menstrual products but was unsure why the goals of the bill had never been achieved, Viola said, which is why it prompted its own campaign.

Generation Action has been gathering signatures from students who support the campaign to present to the Office of Facilities. Viola said the group’s initial goal was to receive 4,000 signatures by the end of the Spring 2019 semester.

“We still need those signatures under our belt to show [the Office of Facilities] that these are the people that support a similar program,” she said.

Generation Action plans on continuing to gather signatures from students, Viola said. It currently has 120 signatures.

The group has promoted its campaign at campus events, including Terrace Rocks. It also partnered with the college’s all-female a capella group, Premium Blend, and has gathered signatures at its concerts.

Viola said the news of the Office of Facilities’ pilot was exciting to hear. The group plans on reaching out to the office to collaborate on the initiative.

“We’ll be very happy to work with the Office of Facilities and see what we can do to kind of push them to implement this,” Viola said.

Generation Action and the SGC received inspiration for their initiatives from Brown University. In September 2016, Brown University started providing pads and tampons in all restrooms on campus for free, due to a campus-wide initiative led by students.

Since then, other colleges have started providing free menstrual products as well, including Chapman University and UCLA.

“I know most college students don’t carry around change in their pockets — I know I don’t,” Kerr said.

She said free menstrual products on college campuses should be the norm.

In the United States, feminine products are a $2 billion industry. The average woman will spend approximately $1,773.33 on tampons in her lifetime, and $443.33 on pads.

“I can’t choose if I get my period every month,” Viola said. “Every month I know it’s coming, and I know that’s $7 out of my paycheck. That doesn’t sound like much, but it adds up.”