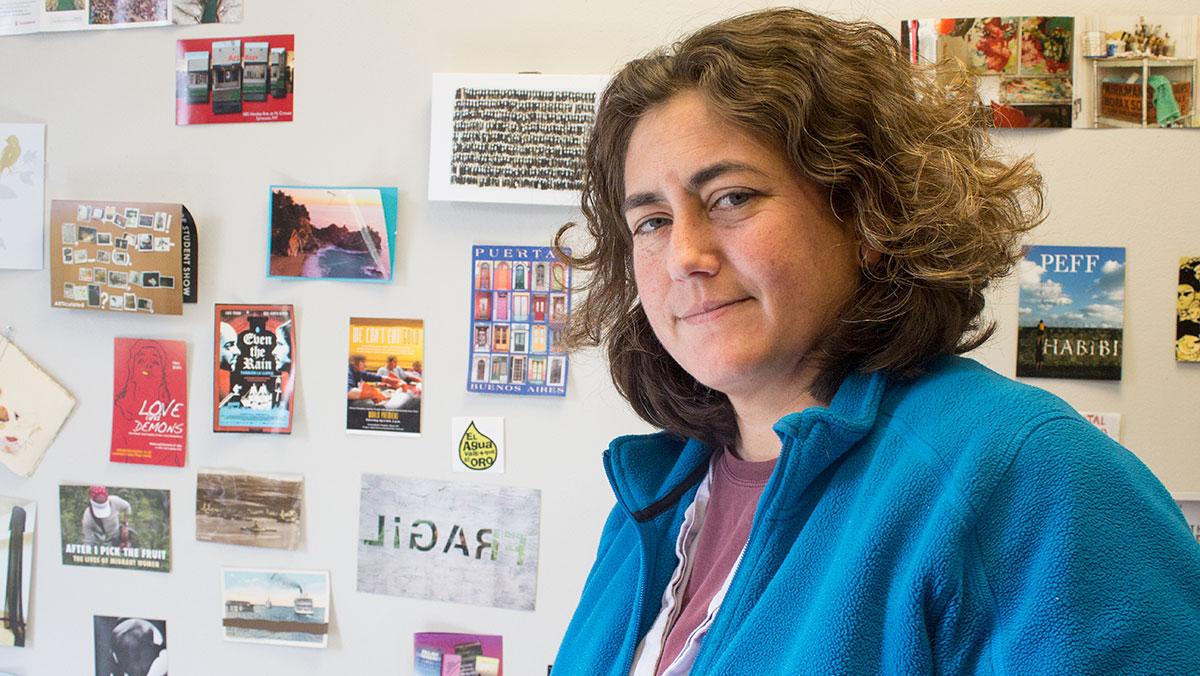 Sabrina Knight/The Ithacan
Patricia Rodriguez, associate professor of politics, came from a childhood under a dictatorial government and spends her time organizing for local causes, such as fighting against the landfills in the Finger Lakes region.
By Sabrina Knight — Staff Writer
Published: November 11, 2014

Growing up in Chile, Patricia Rodriguez, associate professor of politics, said she and her family faced many kinds of social injustices from the dictatorial government. Though she said she was too young to piece together all that was going on in her country, Rodriguez said she developed a passion for activism and speaking out against issues, especially since her family was forced to move to Brazil because of the oppression.

After attending the University of Notre Dame in the United States, Rodriguez said she began to see the U.S. as her home even though she still has family in Brazil. In the Finger Lakes region, she has been involved with a wide variety of social activist movements. Most recently, she said she is fighting against companies trucking up to 6,000 tons of waste per day to the landfills located in the northern Finger Lakes region, and against construction of a casino in Tyre, New York. Additionally, Rodriguez’s biggest and most involved issue is gaining rights for “campesinos,” or rural farmers, in Cauca, Colombia.

Caroline Podraza ’14 was in several of Rodriguez’s classes when she was a student. This summer, Podraza travelled with Rodriguez to Colombia with a delegation of about 12 community members where she produced a film on the issues that are being ignored in Cauca, such as women’s rights and workers’ rights.

Learning about resistance movements and organizing strategies in class is one thing, Podraza said, but seeing your professor implement those practices in the real world helps qualify the information in the classroom.

“It was very satisfying to see that practical application of what she’s been teaching us,” Podraza said.

“It’s not black and white with her,” Podraza said. “She encourages that critical thinking, whereas other people might tell you this is the way it is or that is the way it is.”

Glen Silver, president of Concerned Citizens of Seneca County Inc. and vice president of Finger Lakes Zero Waste, said he has gotten to know Rodriguez through her regular attendance at meetings for these groups for about four years.

“She listens and takes in and is always learning and wanting to understand,” he said. “When she does speak, she offers very valuable insight.”

He has even come to guest lecture in Rodriguez’s classes about the issues, like the local landfill they are both fighting against.

In terms of her current actions, Rodriguez said she has brought students up to tour the landfill in Seneca County.

She has also been involved with CasiNO Tyre, a community of individuals, businesses and religious groups that are all against the demolition of Amish land in Tyre, New York, in order to build a casino. During a CasiNO Tyre meeting that Rodriguez attended, the group wrote an open letter to the pro-casino community explaining the environmental impacts that clearing all land in Tyre to build a casino will cause. Rodriguez said she also tries to get students involved when there are actions and hearings in Ithaca by inviting them to attend the events.

“She’s active, she’s involved and she goes above and beyond the classroom to get involved with these issues and engage with them and with the people who are behind these organizations,” Podraza said.

Silver said he admires her passion and commitment to social justice.

“No one sets out to be an activist, but you are moved,” he said. “What happens is you become moved by some issues by which you are no longer willing to sit idly by. For myself as well as Patricia, I think we certainly share that bond of whether it’s issues that are happening currently today [or] ones that have happened in our past when we were younger.”