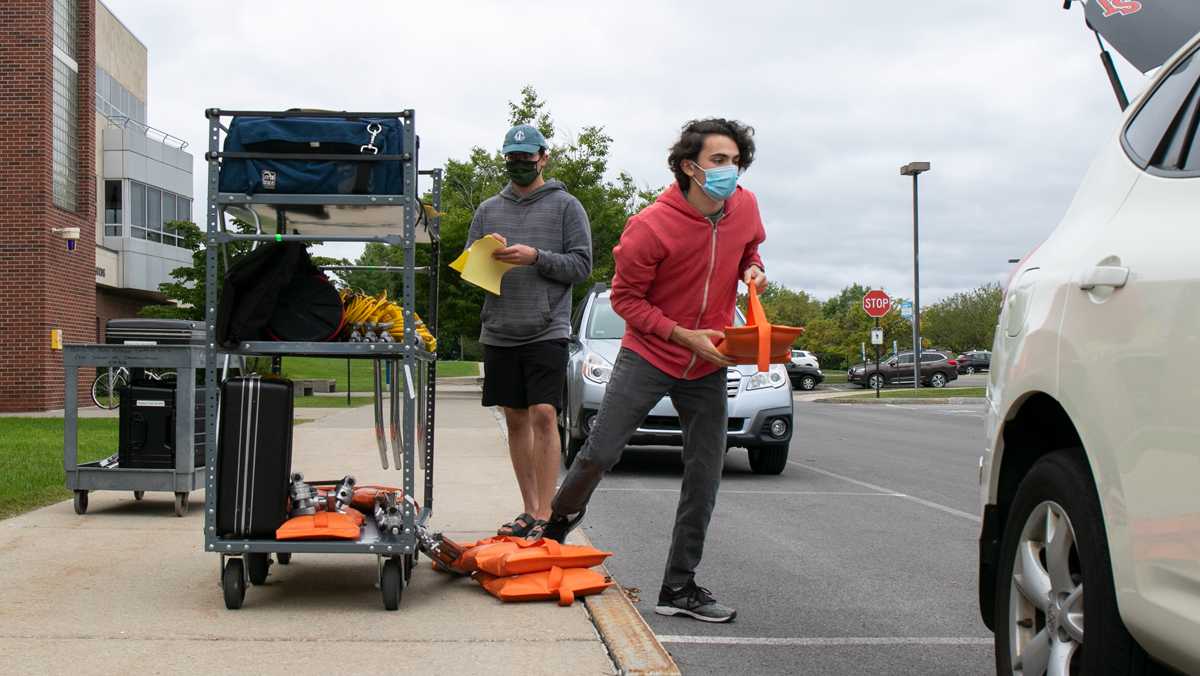 The service provides students in the Roy H. Park School of Communications with the video and audio equipment needed to complete class assignments and projects. All pickups will be done, at a specified time reserved by the student, in O–Lot. This differs from the typical procedure of picking up equipment from inside the building. These procedures may change as the semester continues, said Ryan Berryann ’00, facilities and portable equipment manager in the Department of Technical Operations.

“We want to keep things rolling as much as possible,” Berryann said. “We are going to do our best to keep serving as many students as possible.”

Reservations can be made no more than two weeks in advance unless part of a classwide distribution. All reservations for classes will have to be made at a minimum of 72 hours in advance through the Patron Portal, a requirement that is earlier than in past semesters. Other personal requests are to be made by emailing PPECS staff. Additionally, there will be no walk-ins.

Berryann said that the service will be available to any student requiring it who is willing to drive to the college. There is no procedure currently set for those outside driving distance to receive equipment.

It is likely that different days of the week will be dedicated to either pickup or drop–off to ensure all equipment is inspected and cleaned properly before being used again, Berryann said.

“We’ve been working very hard on a lot of the safety precautions, distancing things and working out a plan for staggered pickups,” Berryann said.

The number of student employees PPECS will have this year is affecting how PPECS will fully run, Berryann said. He said that this semester, the number of students it hires will be significantly less because of fewer students being in the area. He also said it is still waiting on the budget to know how many student staff members it can hire. Usually, PPECS has approximately 40 student employees. Berryann said that currently, it is only himself and Christian deBrigard, portable media production engineer in the Department of Technical Operations, and some other tech operations staff members running the service.

Production classes are still being offered this semester, meaning many students will need access to equipment. Berryann said that approximately 100 students are currently enrolled in sections of thesis and advanced cinema production courses who will likely utilize PPECS during the semester, for example, but he is unsure of how many students will be requiring the service in total.

There were 867 students in majors with an emphasis on production, including cinema and photography; film, photo and visual arts; documentary studies and production; and television–radio in Fall 2019, according to the Office of Analytics and Institutional Research. After the college shifted to remote instruction for the remainder of Spring 2020, students were forced to leave campus without returning the equipment they borrowed from PPECS. However, most of PPECS’ equipment has been returned, Berryann said.

At this point in the semester, Berryann said that PPECS is still meeting with faculty to evaluate needs related to courses. Shola Ajayi, instructor in the Department of Media Arts, Sciences and Studies, said that she has been encouraging students to use their own equipment if they are not able to access PPECS.

Junior Ross Doane, a student in Ajayi’s advanced cinema production course, said that at his current home in Connecticut, it would be difficult for him to utilize the services. He said he hopes that there will be an opportunity to ship equipment from PPECS because his own equipment is still with his parents in North Carolina.

“At best, I can get my [digital single-lens reflex camera] delivered to me from North Carolina, but, even then, I won’t have any microphones or lighting equipment,” he said. “Either I’ll have to change my film to adapt to this or pay a whole lot of money I don’t have to purchase or rent equipment.”

For those within driving distance, the service remains invaluable. Senior Corey Laisure said that he would not have been able to have the senior thesis film he envisioned without PPECS. Laisure is a cinema and photography major, and he said that even though classes are online, he decided to go ahead with producing his thesis film at his off-campus house in Ithaca.

Anthony Adornato, associate professor in the Department of Journalism, has begun distributing equipment to his classes through PPECS for his mobile and social journalism class. He said that 19 of his students are within driving distance and able to receive the equipment but that he is figuring out alternatives for the remaining students.

“We as faculty are really grateful to the PPECS staff because so many of the Park classes obviously rely on access to equipment,” Adornato said. “They were able to really step up to the plate and figure out a best-case scenario in these really extraordinary circumstances.”