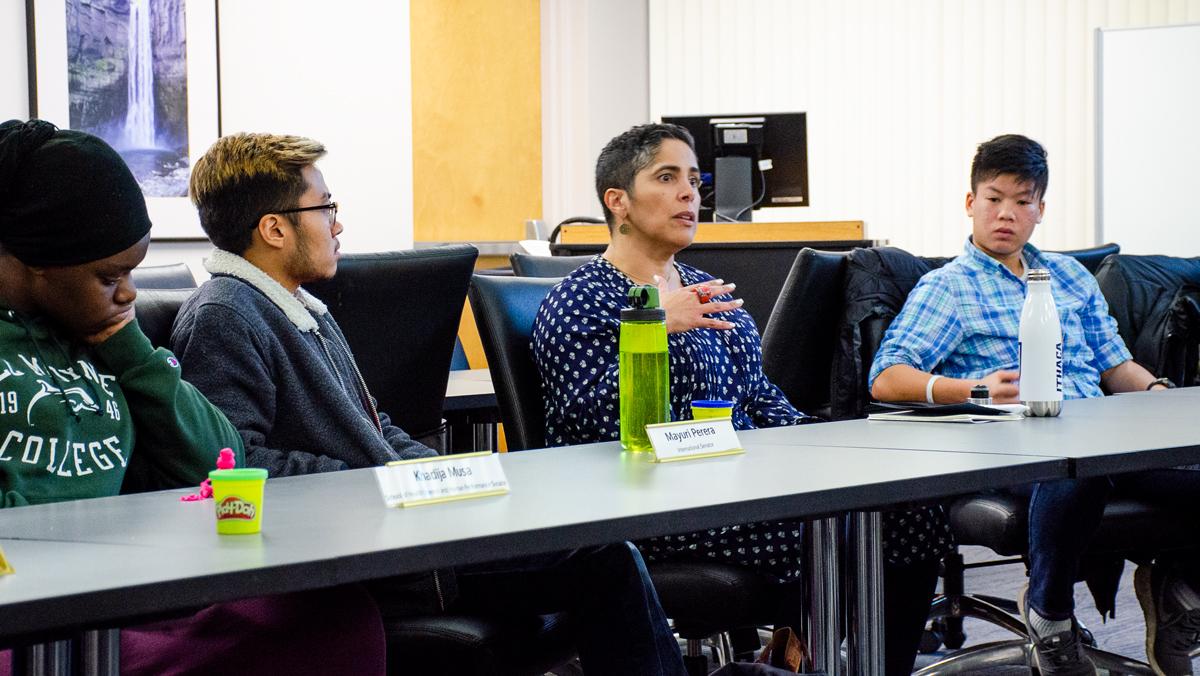 Ithaca College President Shirley M. Collado met with the Student Governance Council at its meeting Nov. 11 to discuss student concerns regarding off-campus housing requests being denied and the underrepresentation of students of color on campus.

Collado also answered questions from the SGC senators regarding issues like the college’s finances, concerns about microaggressions and spaces for students of color.

Junior varsity sports senator Alex Perry asked Collado about the financial issues the college faces regarding underenrollement. Approximately 1,500 students enrolled in the Class of 2023, which did not meet projected enrollment goals of 1,619–1,630 students. Perry asked how underenrollment will affect housing in the coming years.

Collado said the college’s strategic plan specifically outlines a future goal to be more financially sustainable and to not rely on the cost of tuition for funding.

“A major point in the plan is to make sure that we’re financially sustainable and that financial sustainability does not continue to be largely based on enrollment and tuition and fees,” Collado said. “There have to be other sources of revenue, and that’s not your problem to solve, but it’s a really important one when you think of yourselves as alums coming back in 20 years.”

Sophomore Class of 2022 senator Hunter Simmons asked Collado about plans for the appeals process students go through after being denied off-campus housing. Many sophomores were upset after the Office of Residential Life accepted only 51% of applicants for living off campus next semester. Students, including Simmons, met with Collado during her office hours to discuss why they felt they should be allowed to live off campus during the 2020–21 academic year.

Collado said that the appeals process is accessible and that Marsha Dawson, director of Residential Life and Judicial Affairs, can be reached easily via email to set up a meeting.

“The better we make things on campus, the better this will be a place where people can say ‘I want to stay on campus and I want to be able to afford it,’” Collado said. “We know that varies for every student.”

Junior Connor Shea, vice president of campus affairs, said that during his meetings with different student organizations, students brought up the issue of minority students facing microaggressions, specifically from faculty. He mentioned a guest commentary in The Ithacan about students with accents experiencing microaggressions.

Collado said she appreciated that the SGC was able to provide a space where students can share their thoughts on this specific issue and issues about equity in the classroom.

“I think you’ll find that some faculty would be mortified to know that they’ve done anything like that in a classroom or that they’ve made any student to feel that way,” Collado said. “And then there are other circumstances that are not so ideal. Our faculty develop and improve our curriculum. I think it’s important for our faculty to understand the ways in which students might be experiencing these things.”

Sophomore senator-at-large Sebastian Chavez said that the students of color he talked to feel they are underrepresented on campus and that the meeting spaces designed exclusively for them make them feel unseen.

“With the POC on campus, they don’t feel represented in Ithaca College at all, and it’s heartbreaking to hear that,” Chavez said. “I know there’s different spaces for POC on this campus. But they feel like spaces exclude them, like hiding them from the public and keeping them in the shadows.”

Collado said she was unaware that students of color feel they are hidden because of meeting spaces created exclusively for them, one of which being the African–Latino Society (ALS) Room, which is located on the first floor of West Tower.

“I had not heard that before,” Collado said. “When we’ve talked about the LGBTQ resource center, there’s a mixed range of people who absolutely want the safety and privacy and then folks who feel like no, they should be actually open and accessible and people should see what this is about. I had not heard that before, especially after meeting with a number of alums of color who talked about the history of the ALS room and how powerful it is.”