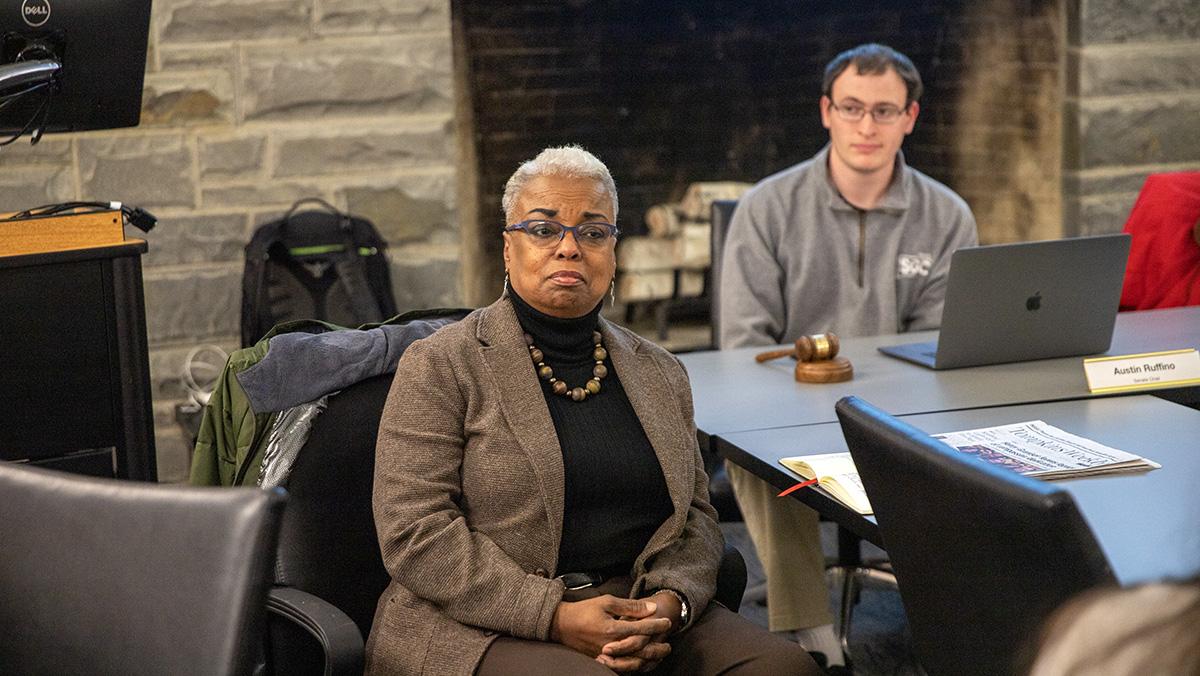 Cornish began by speaking about her time as the president of the college since her inauguration Oct. 1.

“If someone told me when I started teaching sixth grade 39 years ago that I would end up a college president, I would have said, ‘No way,’” Cornish said. “It was a weekend of gratitude as the culmination of a life spent in education.”

“I have been talking to [alumni] about the ways that they can be engaged and connected, and I dream of a mentoring model for students,” Cornish said.

Cornish said her mentoring model would be developmental, spanning over several years, beginning during a student’s first year at the college. She said the mentor, a recent alumni, would support the student in their academic goals, and that the program would be created with the purpose to increase retention rates.

Sophomores Noah Richardson and Hannah Ahmed, Class of 2025 senators, brought up concerns and questions about improving diversity on campus.

In response to the questions from Ahmed, Richardson and the other council members regarding diversity on campus, Cornish talked about improving diversity in curriculum. Cornish said there are more students of color at the college than faculty members of color and that increased diversity is a work in progress. Cornish said the President’s Cabinet plans to do a deep dive on diversity, equity, inclusion and belonging at its meeting Nov. 29.

“What I’m offering is that on this campus, we’ve got people in every one of those stages [of the racial identity formation] every day who are trying to find their way, and this is a beautiful place for us to be able to work that out,” Cornish said.

Members of the SGC also brought up concerns regarding the recent incidents of swastikas and other hate symbols drawn across campus, namely in the James J. Whalen Center for Music. Cornish said that while the college is making preventative efforts against the hate symbols, one of the best ways to address the issue would be for people to speak up if they know someone who has drawn these hate symbols on campus.

“Our hands are really tied, so we are getting cameras,” Cornish said. “But you’re not going to have a camera in every room in every space on this campus. … There’s not much I can do to stop it, but I will condemn it every time.”

First-year student Asata Rothblatt, Class of 2026 senator, asked Cornish what the hardest part of her job is and how the SGC could potentially alleviate any struggles.

“The hardest part about being the president is doing that hard work that people won’t do,” Cornish said. “But 50 years from now when I’m done, many of you will still be alive and so will this college. … Say good things about this place because great things happen here.”

After Cornish’s conversation with the council, the SGC heard senator and officer reports. Senior Grace Madeya, president of the student body, said she is working on a new bill that — if passed — would add two seats to the senate. The SGC will also continue to work on the bill to make an amendment to the SGC Code of Conduct that was not passed at the previous meeting Nov. 14.