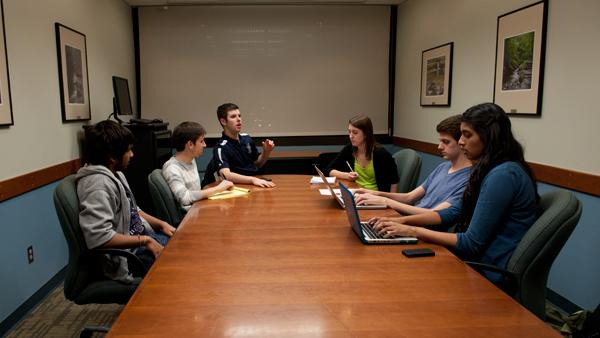 File Photo/ The Ithacan
Senior Rob Flaherty, president of the Student Government Association, will serve as one of the two students chairs for the IEBC next semester.
By Emily Masters — Staff Writer
Published: December 13, 2012

President Tom Rochon will temporarily add two student representatives to the Institutional Effectiveness and Budget Committee for the first time at Ithaca College to give input on where the college should allocate its funds.

Along with this change, two additional staff members will be added to the IEBC for the course of the Huron Education Consulting review, which will assess ways to reduce costs, spend college funds more efficiently and improve revenue and service. This is in addition to the 21 members of IEBC, three of which are staff and two are faculty members, Rochon said.

“This temporary addition of students and staff to the IEBC is a direct response to the importance of the Efficiency and Affordability Review,” Rochon said in an email interview.

Rochon said he wants students to be more involved in the process because they are directly impacted by the results of the review.

“Students have a vital interest in this process because cost savings from reorganization or identifying efficiencies will enable us to slow the future rate of growth in tuition and fees,” Rochon said in an email interview. “Students also have a vital interest because we do not want any possible changes in service levels to have unintended impacts on the quality of the educational experience.”

Senior Rob Flaherty, president of SGA, said the organization lobbied for more student participation in administrative decisions this semester, and Rochon’s decision to include them in the budget committee this year is a huge step toward that goal.

“I asked for an inch, and he gave us a yard,” Flaherty said.

The Huron Review began in the summer, which many student senators had not known about until a meeting with Huron representatives Nov. 13.

Bob Nudruff, Huron project director, presented the stages of review and plan of action to SGA members on Nov. 13. Flaherty said SGA members raised concerns about the lack of student involvement in Huron’s surveys, as well as with the upcoming decisions on where to allocate resources based on Huron’s review.

“I raised some concerns about the fact that there was only a week, [beginning Jan. 17,] to comment on Huron things. For most of that week, students aren’t even going to be here,” Flaherty said. “And the final recommendations were going to be made by a committee that was not going to have any students there.”

Now, Huron will announce its formal recommendations Jan. 17. Students, faculty and staff will be able to post feedback on the Effectiveness and Affordability Review website until Feb. 11, according to The Process for Campus Review of Huron Recommendations, a timeline published Nov. 30. Originally this process was to be advertised mostly to faculty and staff.

In the Nov. 30 Intercom announcement, Rochon said meetings with the Faculty Council on Jan. 22, Staff Council on Jan. 24 and SGA on Feb. 3 will individually discuss Huron’s recommendations within their respective groups.

Then on Feb. 6, from 3 to 6 p.m. and at 10 p.m., there will be an open house for feedback on the review. Following the open house, IEBC will take February, March and April to discuss the review.

Rochon requested that Flaherty be one of the two student representatives and help him select the second, who can be any student, on SGA or not. Flaherty said Rochon suggested that it not be another SGA executive board member.

“Students on the committee will be full participants,” Rochon said. “They will read the Huron recommendations and the feedback from the campus community; they will also bring their own experience and insight to the table.”

Dominick Recckio, SGA class of 2016 senator, expressed his interest in being one of the two students, and he said Flaherty put him on the list with other interested candidates. He said he is excited for the potential for greater student involvement in college budget decisions.

“I’m ecstatic,” he said. “This is the kind of thing that SGA fights for and tries to get. Ithaca College made a great choice.”