Matt Maloney/The Ithacan
Associate professor Leann Kanda is working on a project studying the behavior of animals when introduced to unfamiliar surroundings in their habitat.
By Meredith Burke — Staff Writer
Published: November 7, 2017

Pink, plastic flamingos are not commonly spotted in the Ithaca College Natural Lands. However, students, faculty and staff who are regular Natural Lands hikers might come across the typical garden fixtures, which are being used to study animal behavior.

The flamingos are part of an animal behavioral study conducted by Leann Kanda, associate professor and chair of the biology department, to compare the behaviors of urbanized and remote animals in response to foreign objects in their natural habitats. Each of the flamingos, which are spread around Tompkins County, is equipped with a motion-sensor camera that activates when an animal comes near it and records the animal’s movements. Every two weeks, students who are working on the project through Kanda’s biology research lab will collect and analyze the footage.

“So, what we’re doing is called a novel object test, it’s a classic psychology test,” Kanda said. “You present an animal with some object that … it’s never encountered before, and you use their behavioral reaction to that object as something that you can compare across all the different animals.”

Kanda said she is particularly excited about this project because she is able to record the animals in their natural habitats. In past experiments, researchers typically removed the animals they are studying from their habitats and put them in different environments.

“I’m excited by the idea of actually assessing personality in wild mammals,” Kanda said. “Normally, if you want to do some kind of standardized response by an animal, you need to catch it, put it in some kind of test arena. … Here, what we’re trying to do is to do it without interfering with the animals in their natural day-to-day.”

The project is also focusing on mammals, which Kanda said is one of the first tests of its type. 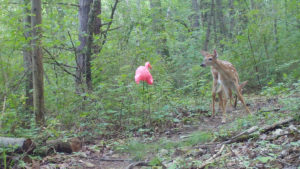 A fawn cautiously checks out a plastic flamingo that is a part of Leann Kanda’s, associate professor and chair of the biology department, animal behavior project. PHOTO COURTESY OF LEANN KANDA

Since the project is still in its early phase in terms of collecting data, there are no solid conclusions that can be made yet. Kanda said the project could take another one to two years before a conclusion can be reached on the research.

The actual development of the project began during Spring 2017 when now-junior biology majors Christopher Gallego and Nicolas Unmann began working with Kanda in her research lab. Gallego said he was eager to start on the project because it was more of a preliminary study, which meant that he personally got to develop some of its methodologies in terms of what cameras to use, the parameters needed and other aspects.

“It was almost like I was an actual researcher,” he said. “Some of the labs are pretty straightforward with their procedures … but this project really let me figure out how it’s supposed to be done. If there were any problems, it was on me to find the answer to the problem or work around it.”

Gallego and Unmann spent the entirety of the spring semester working on methodology for the project. A significant portion of their time was dedicated to issues that came up while attempting to collect footage, mostly due to some faulty cameras that were used.

These issues extended into the summer, as Gallego continued to work on the project through the DANA Student Internship Program — a program for students looking for valuable work experiences — along with Eleanor Almeida, senior biology major, who worked full-time as a summer scholar for the biology department. Gallego said they both spent roughly nine hours a day, five days per week on the project.

However, Almeida and Gallego were able to obtain and analyze some footage near the end of the summer. In the footage, the students were able to see various mammals, mostly deer and vermin, approaching the flamingo, some giving it brief consideration and some completely ignoring it. Others viewed the flamingo as a threat and attacked it. One video shows a fisher, which is a relative of the weasel, lunging at and attacking the flamingo placed at Hammond Hill State Forest. 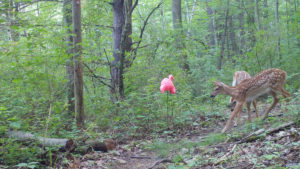 Two deer interact with a plastic flamingo in the woods in Ithaca, New York. COURTESY OF LEANN KANDA

“We got some pretty good video of animals interacting with it,” Gallego said. “It was enough to justify continuing the project in the future.”

The project is continuing into this semester. Junior Amanda Cioli, also a biology major, is currently the only student working in the lab. She is responsible for attending each site herself, collecting footage and analyzing it.

“I set up flamingos in the fields, which are supposed to act as novel, foreign objects to the animals, and then I set up the cameras,” Cioli said. “Then, two weeks later, I come back and analyze the data and record how animals behave toward it.”

Cioli said the hard work is worth it due to both her special interest in animals, as she plans to be a veterinarian in the future.

“It’s different because I actually get to visually see what’s going on and observe the animals,” she said. “It’s a different research lab because in the other labs … you’re just in the lab doing microscopic experiments.”