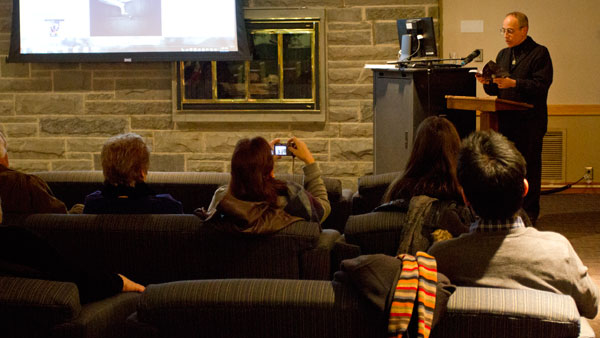 Anthony DiRenzo, associate professor of writing, recently published an historical novel called “Trinacria: A Tale of Bourbon Sicily,” which focuses on the character Zita Valanguerra Spinelli, Marchesa of Scalea, a powerful and dynamic businesswoman in 18th- and 19th-century Italy. He read excerpts from the novel at 7 p.m. Feb. 11 in Klingenstein Lounge in the Campus Center.

The novel draws on themes relevant to DiRenzo’s own family history and legends. His family is descended from Spaniards and Italians who emigrated to Palermo, Italy. He said he imagines his characters in historical contexts as compared to psychological ones — he chooses to understand not only his characters’ emotional motivations, but their personal histories as well.

DiRenzo said he has been working for more than 12 years on this project organized by Guernica Editions and sponsored by the Italian Cultural Foundation at Casa Belvedere. DiRenzo has delved into research around the agricultural and mercantile history of those living in Sicily in the 18th and 19th centuries amid the cultural and urban revolution in Italy.

Staff Writer Samantha Guter sat down with DiRenzo to talk about the novel and DiRenzo’s process for researching and writing his material.

Samantha Guter: What was the research process like for writing your novel?

Anthony DiRenzo: The cluster of it is family history. A lot of that stuff is family legend, but all you get are these flashes of characters without any sense of context or explanation, so they seem strange. But it’s a period of history I’ve been fascinated by since I was a child.

SG: Did you get to discover your own genealogy as well through that research?

AD: Yes, but mostly through inference, through educated guesses, which are then confirmed by occasionally discovering a source or document or hearing about an anecdote. You must understand, so many records were destroyed during the revolution, and not everybody wants to talk about what happened, too. So much of it is speculation. I do take imaginative leaps, but they’re always guided by, anchored in, the facts, which are fantastic enough. You don’t have to make anything up when it comes to Sicily.

SG: Where did the original idea for “Trinacria” come from?

AD: It came from a short story that I wrote about a son fighting for his birthright for a citrus orchard in Sicily, and in order to allot himself against his tyrannical father, he goes down to the Catacombs of the Capuchin and makes an offering to his great-grandmother and places an orange in her mummified hand. The character that I created, Zita Valanguerra Spinelli, Marchesa of Scalea, is very much inspired by [Alessandra Spadafora, duchess of Santa Rosalia] and other figures from that time, so she’s a kind of compendium of those people and my own ancestors — the matriarchs in my mother’s side of the family.

SG: Did you travel at all for the research?

AD: I did not go to Sicily for the research. I interviewed online, I Skyped — all those things were enough. I had been to Sicily as a very young boy, and that was enough, and even better because emotionally, as a child, you experience this sense of wonder.

SG: What is important about telling this story in 2014?

AD: Italy has only been a modern country, a united country, since 1870, and until 1922, a constitutional monarchy and then a fascism. Just after the regime, it was a modern democracy. That kind of fractured history makes it very impossible for Italians to come together. So that’s one thing that makes it timely, so the other is nation building in the Middle East, in Afghanistan, in Iraq, the same mistakes that northern Italians made in Sicily, Americans are making now over there. The last, of course, is just the financial meltdown that occurred that is global and still ongoing.