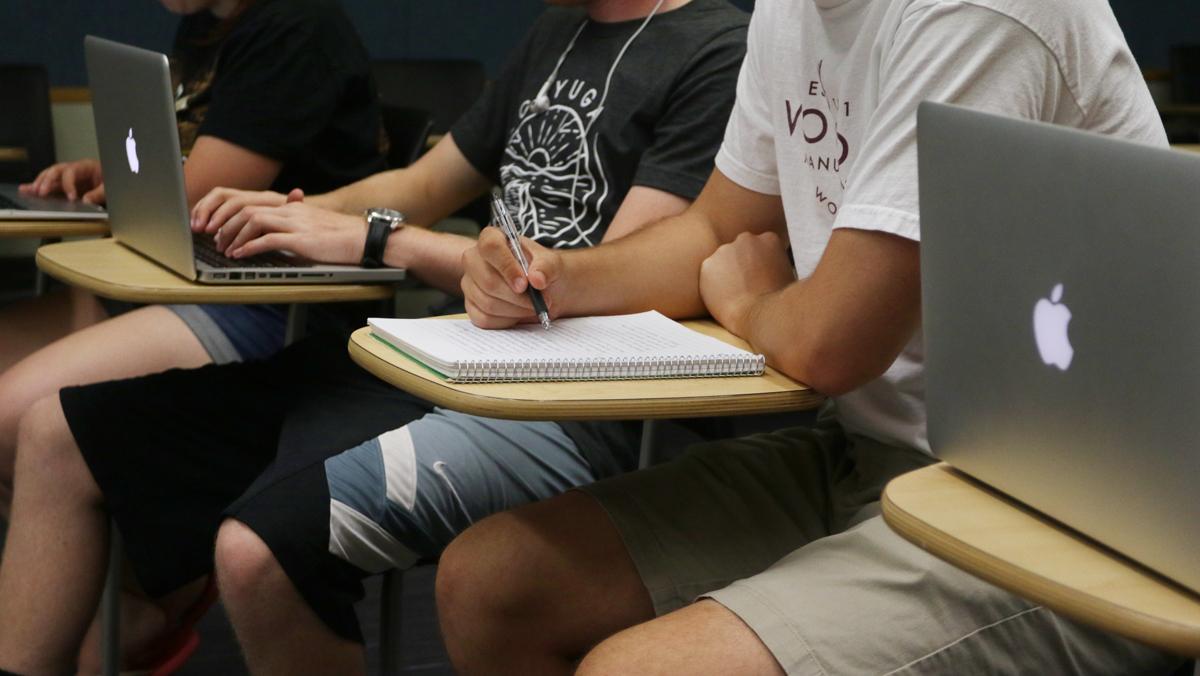 Photo Illustration by Connor Lange
The use of student devices in classrooms is determined by each professor, and depends on the course they are teaching. Some professors support student devices, arguing they serve as a teaching tool while others argue they are distracting to students in class.
By Madison Moore — Contributing Writer
Published: September 24, 2017

The debate over the use of student devices, such as laptops and cellphones, in the classroom has been an ongoing conversation among professors and other educators for quite some time at institutions such as Ithaca College.

Many professors have policies in their syllabi regarding the use of laptops and cellphones in their classrooms and can justify why their policies are in place. Julia Lapp, associate professor in the Department of Health Promotion and Physical Education, and Julie Dorsey, associate professor in the Department of Occupational Therapy, will be hosting a discussion titled The Device Debate: Student Use of Technology in the Classroom on Sept. 25. The discussion is an opportunity for faculty to come together and learn from each other to come up with effective classroom policies, Lapp said.

“I think it can be an opportunity to build self–awareness,” Dorsey said regarding the event.

The integration of computers into classrooms began in the 1990s. Some educators argued computers could be a better tool for teaching as students could access information quickly and that computers would allow innovation in teaching. Others now argue that since computers are common in the classroom, they are distracting to students and limit their ability to concentrate.

Some schools, such as Seton Hall University, even provide their students with a laptop upon enrollment. At Ithaca College, the Roy H. Park School of Communications requires a majority of incoming freshmen to purchase a laptop. For example, the Department of Journalism requires students to specifically have a MacBook Pro. Noel Enyedy, associate professor of education and information studies at the University of California Los Angeles, published a study examining the impact technology has now on student learning. In his study titled “Personalized Instruction: New Interest, Old Rhetoric, Limited Results, and the Need for New Direction for Computer-Mediated Learning,” he said educators must find new ways to use technology and show that it is effectively aiding student learning.

Professors at the college have varying opinions on technology use in the classroom, and many base their decisions off the subjects of the courses they teach. Anthony Adornato, assistant professor in the Department of Journalism, uses technology as an integral part of his courses, such as Mobile and Social Media Journalism. He encourages the use of student devices in his class and sees it as a way to complement the traditional ways of learning, he said.

Adornato said he acknowledges the fact that most students these days have grown up with smartphones and laptops present in their lives.

“You guys are digital natives,” he said. “You were born with this stuff in your hands, but how can you use it in more professional ways?”

Adornato said he feels there are opportunities in any discipline to integrate student devices into activities or lessons as a teaching tool.

Kelly Dietz, assistant professor in the Department of Politics, said she feels that the use of student devices depends on the person who is using them. In her politics courses, she does not see a use for these devices, and therefore, they are not permitted in her classes.

When Dietz first started teaching, she allowed the use of laptops for note-taking until she began to get complaints from students in the classroom who were distracted by other students’ devices.

Dietz’s politics courses are based on class discussions and debates that get people thinking a certain way. For these learning opportunities to be successful, the students cannot be distracted by their devices, she said.

“I need people to be present because we are discussing matters that are inherently controversial,” she said.

Luke Keller, Dana professor in the Department of Physics and Astronomy, stressed the importance of student devices in his teaching techniques. This year, he is integrating a polling system where students download a clicker app on their phone and answer questions via the app.

“The technology for me is not a barrier to what we’re doing,” he said. “It actually makes it easier for students to get what they need from me while they have me in class.”

Keller said the layout of the classroom might affect professors’ decisions on the use of student devices in their classes. He can easily monitor what his students are doing on their laptops because they sit at round tables and there is no real front of the class, he said.

“I can see how perhaps in other disciplines or other classroom layouts, it might be quite disruptive and people might want to have a different rule,” he said.

John Rosenthal, professor in the Department of Mathematics, said he is indifferent to students’ choices of note-taking but has observed that a majority use pen and paper, which he credits to the long formulas and complicated problems mathematics presents.

Rosenthal stressed the use of graphing calculators in his class and said they allow students to explore things they cannot accomplish by hand.

Professors at the United States Military Academy conducted a study, “The Impact of Computer Usage on Academic Performance,” that found that students who use laptops or tablets in an economics class to take notes do worse on the final exam than students who strictly use pen and paper.

Susan Carter, assistant professor at the United States Military Academy and one of the authors of the study, said they conducted the study to see how distracting laptops were in classrooms where these devices were optional.

“Our study was looking at a class where computers and technology were optional,” she said. “There are certainly techniques where people use technology in the class to help students learn, and that’s different from what we were studying.”

Freshman Evan Schreiber said all his professors have different policies on students’ use of devices in the classroom. He said he wishes policies were consistent so his notes could all be in the same place. He suggested that each department come to some agreement on a policy.