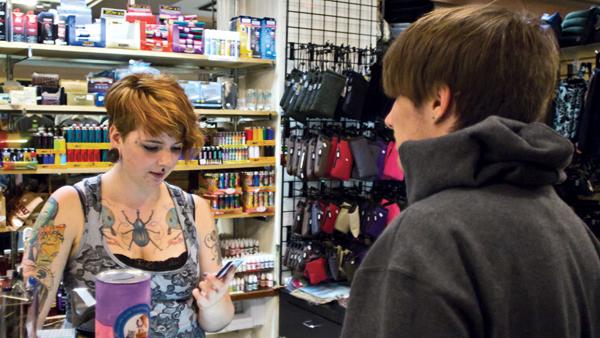 In the legislation, “tobacco products” refer to one or more cigarettes or cigars, chewing tobacco, powdered tobacco or any other tobacco products, whereas “smoking paraphernalia,” items commonly found in head shops, refers to pipes, water pipes, hookahs, rolling papers, vaporizers or other apparatuses designed for inhaling tobacco. Any establishment that sells either tobacco products or tobacco paraphernalia is considered a tobacco dealer.There are currently six head shops located on The Commons. In addition, there are nearly 20 tobacco retailers — not counting corner stores and gas stations.

Until now, Ithaca tobacco dealers have only been obligated to register with the New York State Department of Tax and Finance and obtain a certification that authorizes the collection of tobacco excise taxes. Like most cities, Ithaca requires no specific local permits for the sale of tobacco. According to the Centers for Disease Control and Prevention, the drug remains the leading preventable cause of death in the U.S.

The proposed changes would require every dealer of tobacco products in Ithaca to have a valid permit. For the first year permits will only be issued to applicants for the same location where they were issued a certificate of registration from the New York State Department of Taxation and Finance. The number of permits issued will have a limit, though that number has not yet determined.

Gary Ferguson, executive director of the Downtown Ithaca Alliance, said the legislation is being brought to the table to regulate businesses selling tobacco and paraphernalia.

The proposed regulations have been sent to the Ithaca Common Council for review, but no timetable has been set. If considered, the document would be passed along to the Common Council Committee for approval. Pending a decision by the committee, it may appear on the next Common Council agenda, which could be as early as Sept. 26.

Senior Evan Nison, director of the New York Cannabis Alliance and president of Students for Sensible Drug Policy at Ithaca College, said he is concerned the proposal makes little distinction between drugs and paraphernalia.

“I’m not saying that drugs like tobacco shouldn’t be regulated; it’s a completely free market. But glass, something that isn’t a drug, shouldn’t be,” Nison said. “If we have six or seven shops right now that are doing well — and they’re not selling drugs, they’re selling glass — I don’t see why the Downtown Ithaca Alliance or council members would support that.”

Among the head shops that would be affected is Jabberwock, located on The Commons. The store sells glass pipes, assorted beads, drums, ethnic clothing and local crafts. On an average day, the store sees between 100 and 300 customers pass through its doors.

Jael McGreal, co-manager at Jabberwock, said she wants people to understand what stores like hers bring to the community.

“Although we do sell a lot of glass, which is considered paraphernalia sometimes, we’re keeping local artists alive,” McGreal said. “And, we’re not just selling pipes that we order from China, we try to keep 95 percent of our industry entirely local.”

The proposed legislation suggests that a business caught illegally selling tobacco paraphernalia to minors could be made to display a disclaimer above its doors:

“This business sold a tobacco product to someone under 18 years of age and may not sell tobacco products again” until a date to be determined by the city.

Also in the proposal, local dealers would have to display signs that read, “Tobacco use harms you and loved ones now. It may kill you later.”

The limits will potentially resemble those in New York City and Dutchess County, where similar laws were passed.

Michael Caldwell, Dutchess County commissioner of health, said in a statement that he’s seen a decrease in the number of active retail tobacco vendors in the county. He said he hopes other cities will take the proposed legislation into consideration.

“Other jurisdictions should consider implementing a local tobacco permit requirement,” Caldwell said. “It provides a better way of tracking how many active tobacco vendors are operating within the area and offers a means of additional oversight over retail tobacco vendors. In addition, the permit fee collected offers additional revenue for carrying out the tobacco program.”

“They’re completely different drugs, and regulating them as if they’re not is horrible policy,” Nison said.

In the proposal, the DIA argues that “a local licensing system for tobacco retailers is necessary and appropriate to protect public health, safety and welfare of our residents.”

If passed, the proposed law would crack down on the sale of tobacco products to minors. According to a study conducted by the American Journal of Public Health, there is a direct connection between closer residential proximity to tobacco outlets and higher rates of youth smoking. This is an idea the DIA expressed in the proposed legislation.

“There’s a gas station by my house, and they asked me for my ID the first time and they looked at it and said, ‘This isn’t you,’” *Jared said. “I said, ‘No, it totally is me!’ And they believed me.”

The 17-year-old Ithaca College student tried his first cigarette at age 12. He now uses his friend’s ID to purchase Marlboro Menthols on The Commons. He may not look exactly like the person in the picture, but he said tobacco dealers always put the sale first.

A 2008 report released by the New York State Department of Health shows that 8.3 percent of state retailers surveyed admit illegally selling tobacco products to minors. This compares with the 20 percent of underage smokers who say they purchase cigarettes from those same retailers.

Ted Schiele, program coordinator for Tobacco Free Tompkins, said he wants to reduce the accessibility of tobacco to underage buyers. Though no deadline has been set for approving the proposed legislation, he said the proposal is the result of a collaboration between the tobacco control program and Tobacco Free Tompkins.

“We want to help reduce the smoking rates in our county first of all, but really, everywhere,” Schiele said.

The effort is aimed at better educating tobacco store owners about their responsibilities under the Adolescent Tobacco Use Prevention Act, which prohibits the sale of tobacco products to minors in New York.

The U.S. surgeon general’s report from March shows a downward trend in tobacco use. The decline, however, has slowed dramatically from previous years. Today, more than 3 million high school students smoke cigarettes.

In a further effort to tighten restrictions on tobacco dealers, the DIA’s plan would require the permits to be renewed annually. The permits would be gradually phased in over a 12-month period to efficiently handle the frequent renewals.

Because the policy is still new, experts can not speculate how Ithaca will be affected. The only map available for the potential effects on the area are the results of local permit experiments in other counties. Caldwell stated that the price of cigarettes sold in Dutchess County has increased in the last four years. This is not necessarily because of the local permit requirements.

“The price of cigarettes purchased during routine Adolescent Tobacco Use Prevention Act  compliance checks increased by about $2 per pack between 2008 and 2012,” Caldwell said. “This increase however is not necessarily attributable to the local permit requirement.”

At this point it is unclear to local leaders what, if any, rise in price will be felt by smokers. Ithaca city clerk Julie Holcomb said the proposed regulations are still in the very early stages of development.

“It has been reviewed by the Downtown Ithaca Alliance Board as a proposal of something they’re interested in seeing if the city is willing to pick up,” Holcomb said. “It hasn’t reached any city committees yet, so most Common Council members probably aren’t aware of it yet.”

There is no clear timeline for this legislation so far. However, Nison said he expects it will eventually pass. It is now left to the Ithaca Common Council to decide how to move forward and if changes need to be made to the proposal.

McGreal said she thinks the law will hurt Jabberwock less than other head shops — if passed — because of everything else the store has to offer the community.

“We do have a whole bunch of local artists as far as skirts, dresses, and pants — just general subculture kinds of clothing. We have instruments and practically a drum lounge, where people just come and get together and they gather. It’s a huge community at Jabberwock that revolves around local art and local artists and local people. And, we have people coming together that is not at all defined by our pipes,” McGreal said.