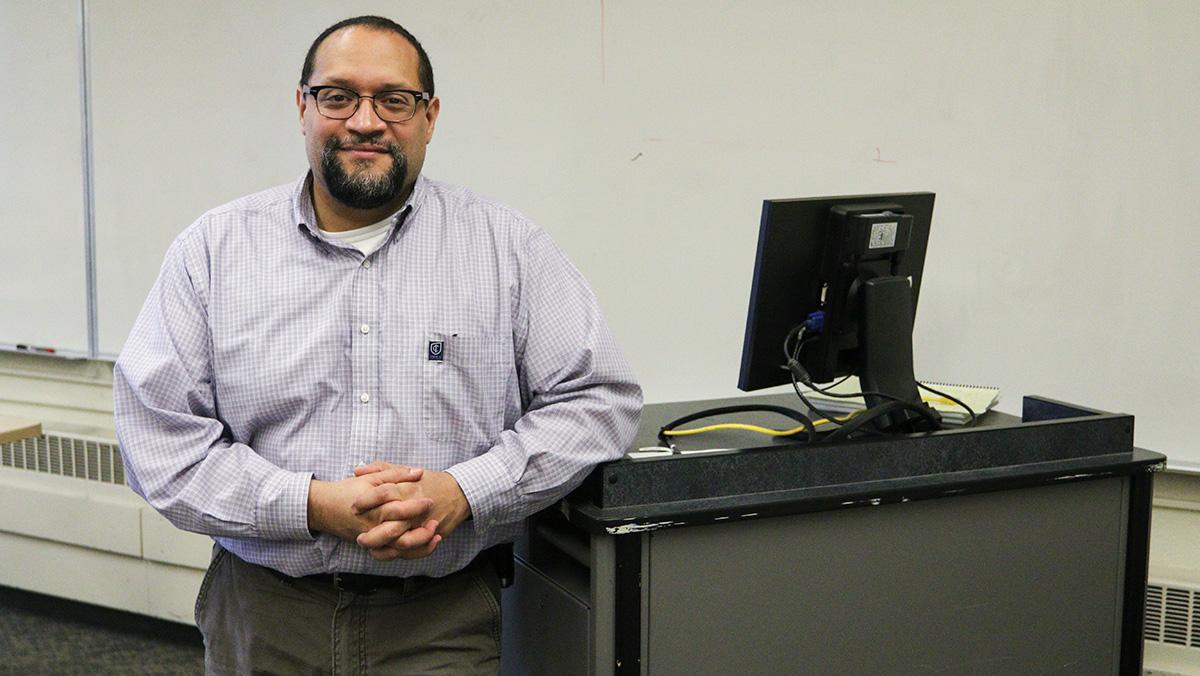 A few weeks before the presidential election, Carlos Figueroa, assistant professor in the Department of Politics, wrote an op-ed in the Fair Observer about Donald Trump’s appeal to voters. The article was titled “Donald Trump’s Rebranding of US Politics Matters,” and it was later republished in WioNews.

Following the results of the 2016 presidential election, Staff Writer Ryan King spoke with Figueroa to discuss the op-ed and his thoughts on Trump’s victory.

Ryan King: Why did you decide to write that op-ed?

Carlos Figueroa: I wanted to put my thoughts on paper about what is it that is attracting people to Donald Trump … and what is it that is bringing him to light now, in particular during the primary season when we had so many … candidates. Here we had 16 or 17 Republican candidates all fighting for the nomination, and Trump was one of them. So then I was following all of this over time, and I was having conversations with my colleagues here, in particular Raza Rumi, who said, “Why don’t you just write an op-ed?” And one of my main observations that I tried to lay out was the changing of the environment. People were saying that he was just rising, and I said … that he’s been consistent for the last 30 years. It’s just that the environment is now conducive to someone like him. … So basically, I wanted to put my thoughts on paper, and I thought about the two things: One is the environment — the social, political, economic environment around him changing, allowing his consistency to come out even more — the other is his use of third-party rhetoric and this idea of [him being] an outsider.

RK: What was the biggest factor in Trump’s rise to the presidency?

CF: One of the major arguments that I don’t agree with in a sense is people saying that he tapped into the people’s racism and bigotry. And there are elements to that, but in terms of strategic reasons … the Republican Party, because they were in disarray in 2007 and 2008, at that time decided [to] try to gain seats at the local level, state [and] national [levels]. So they took it one step at a time; the Republican Party was paying attention to the working–class people across race and ethnicity because [Trump] was able to win from Obama’s coalition of 2008 and 2012. … On top of that, we had major segments of the nonwhite population not turning out to vote when they turned out for Obama.

RK: You described a cultural war over taxonomy as part of Trump’s success. What is that, and why?

CF: [It is] the classification of what kind of categories define you … as opposed to “What do we have in common, and how do we get to achieving certain goals in terms of housing, jobs, social needs and improving living conditions?” So we started seeing the left and the right argue the cultural war about classification, about social markers. … [It is] this idea about fighting over hierarchy as opposed to … what we have in common — jobs, safety, adequate education, a living wage. If you talk about those kinds of issues, you cross racial and ethnic boundaries and generations.

RK: At one point, you described Trump’s anti-elite politics and his ability to voice the forgotten middle-class man as part of his success. He is a billionaire who lives in a gold-plated mansion. How is he able to come across as anti-elite and as a voice of the middle class?

CF: He started using popular language. He wasn’t talking above the masses, which is something that, unfortunately, the Democrats or Hillary would do. … So it’s basically the rhetoric and his candor. … The popular language, which is similar to what Sanders was doing on the left, so they were tapping to similar working–class needs [and] wants. And he used it effectively because he wasn’t using sophisticated language or words. He was trying to be the everyday tough–guy persona that he carried himself with on television.

CF: I think yes because you begin to see it now. I see it with Chuck Schumer [taking] over as the minority leader in the Senate, and now he has appointed Bernie Sanders and Elizabeth Warren to leadership positions in the Senate. That is a sign that they are now taking it seriously. … Sanders was able to change the Democratic platform during the election; many of his issues were put in the platform, in the planks of the party platform, so that is a sign of change towards a more progressive side of the ideological spectrum.