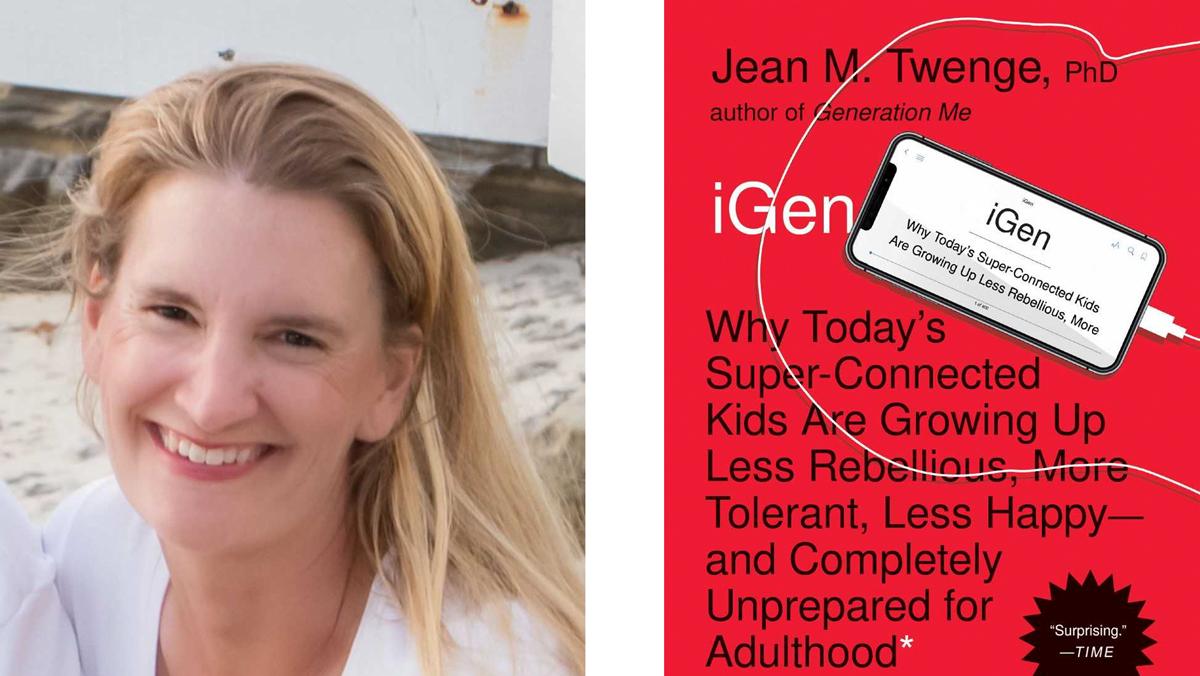 Courtesy of Jean Twenge
Jean Twenge, a professor of psychology at San Diego State University in San Diego, California, is leading a discussion on her newest book Sept. 27 at Ithaca College. The book discusses trends amongst iGens that Twenge identified through her research.
By Krissy Waite
Published: September 26, 2018

Jean Twenge, a professor of psychology at San Diego State University in San Diego, California, will be leading a discussion at Ithaca College about her newest book, “iGen: Why Today’s Super-Connected Kids are Growing Up Less Rebellious, More Tolerant, Less Happy — and Completely Unprepared for Adulthood” on Sept. 27.

“iGen” is about the generation born after 1995 and into a world dominated by technology and social media. The book focuses on how iGens are different from generations before them primarily due to their interactions with technology. “iGen” has faced some criticism from readers. One book review by National Public Radio said Twenge seemed to draw conclusions about the generation before collecting evidence.

Staff writer Krissy Waite spoke with Twenge about her book, “iGen,” how it could be useful to college students and how she handles criticism of her work.

Krissy Waite: How do you foresee college students utilizing your research and your book, “iGen?”

Jean Twenge: I think that the book should give college students a good perspective on their generation and how they have been shaped by technology and how they are different from the millennials just before them.

KW: Do you think that by reading “iGen,” college students would possibly change their habits?

JT: That’s a possibility. I think that it’s a common reaction for people to say, ‘Well, upon reading this book and this research, it’s helped me think more carefully about how much I use my phone and how it might be better to interact with people face to face.’ There’s also some good advice in the book about just, in general, being more mindful about how you use your time.

KW: Your book has been both celebrated and criticized. What is your response to critics?

JT: Well, this isn’t my first book. I’ve done this before, and what usually happens, the most common pattern, is that criticisms are very often based on misunderstanding of the premise of the book, the point of the book. So, for whatever reason, people tend to focus on the negative and assume, for example, that some people have said that the book is a criticism of the generation, and it’s nothing of the kind. It’s a look at both positive, negative and neutral trends that have shaped the generation. None of it is about criticizing or blaming — it’s about understanding. The other thing I hear quite a bit is, ‘Well, haven’t older people always criticized the younger generation?’ I think there are two misunderstandings in that. First, that it’s criticism, and it’s not — it’s positive trends as well. And second, that this is some sort of rant from an older person’s perspective, while in fact it’s based on surveys from young people themselves. I didn’t interview older people — there was no survey data from older people reflecting on the younger generation. Instead, it’s about what young people say about themselves, about how they’re spending their time, about their opinions, about how they’re feeling, and I think that’s often misunderstood. I think often it’s because [critics] haven’t read the book and react to it just from the title or having heard someone talk about it rather than actually having read the book.

KW: Technology is constantly advancing, and there’s no sign of social media use halting in the next couple generations. Speaking to the negative trends, such as the increase in depression and anxiety, do you worry for future generations, or do you believe there’s a way to change the way younger people use and view social media?

JT: I think there’s some definite room for change that is realistically possible because what the data points to is not giving up technology or even giving up social media but using it less or even using it in a more limited and mindful way. I think that’s very possible to maybe, for example, have a social media account but maybe not have the app on your phone and just check it on your laptop and not have to be on it every day or hours a day. That’s what the data and research points to for happiness and mental health, is being connected and using technology but in a limited way. So, most of the research suggests that use of up to two hours a day during leisure time isn’t linked to negative outcomes. Beyond that, it has associations with negative outcomes. Probably because when it reaches more than two hours a day, it tends to crowd out time for beneficial activities such as seeing friends in person or getting enough sleep.

KW: Is there anything I haven’t asked that you feel students in particular should hear?

JT: I think the most important thing to get across is the book is based on surveys from young people, and the surveys are nationally representative, meaning that people from every background are included. It’s really meant to be a snapshot of a generation from what young people are saying about themselves.