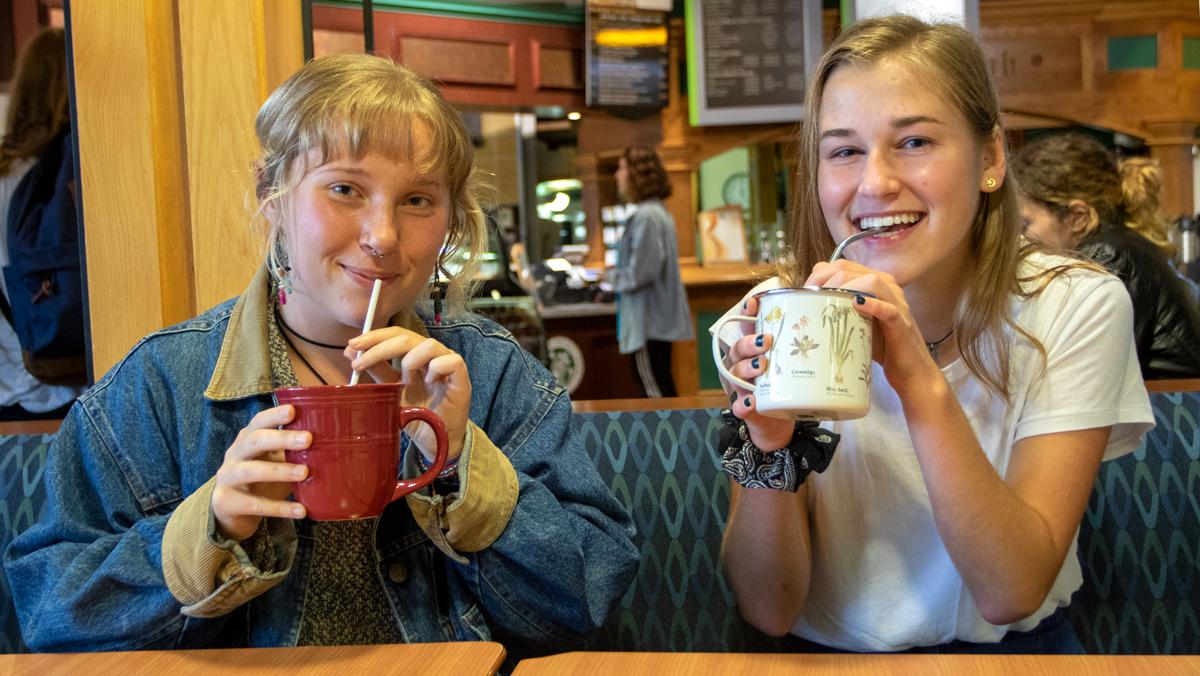 Maxine Hansford/The Ithacan
From left, sophomore Sophie Becraft, vice president of Ithaca College Environmentalists, and sophomore Leah Eddy, president of Ithaca College Environmentalists, both use sustainable straws rather than single-use plastic ones. Retail dining options on campus, such as IC Square, will use the rest of their plastic straw supplies until these run out, and will then only offer new compostable straws.
By Krissy Waite — Staff Writer
Published: October 8, 2018

Ithaca College will no longer be purchasing plastic, single-use straws for its on-campus retail locations. Instead, the plastic straws will be replaced with compostable ones.

According to Mark Darling, retired sustainability programs coordinator, the decision to replace single-use plastic straws was made by Dining Services at the college in August. Darling was one of the people who helped coordinate the switch from plastic to compostable straws. The retail locations, like the food providers in IC Square, will use the rest of their plastic straw supplies until they run out and then will only use the new compostable ones.

Jeffrey Scott, general manager of Dining Services, said the compostable straws are not more expensive than the plastic straws the college already buys.

Scott said part of the reason the switch was made is due to the amount of attention the issue of compostable straws has been getting on a national level. Over the past year, several large companies and cities have moved toward banning single–use plastic products. Starbucks announced it will be phasing out single-use straws by 2020, and Seattle banned all plastic straws in July. Scott said as more and more companies and college campuses move away from single-use plastic, he saw no reason for the college not to jump on board.

“We certainly want to do our part to always look at opportunities,” he said. “… We just want to be supportive of ongoing efforts to enhance our connectedness around sustainability.”

Darling said this switch was in response to a conversation with Rebecca Evans, campus sustainability coordinator in the Office of Energy Management and Sustainability. He said the college wanted to do its part in saving marine life and being sustainably responsible.

“We’re following a trend here,” Darling said. “We felt that we needed to do it, so we did it. It was an easy thing to do since we were supported at a higher level to do that. … It was simple”

According to National Geographic, 8 million tons of plastic pollute the oceans every year. Of those 8 million tons, approximately 0.025 percent are straws. According to strawlessocean.org, straws are hard to sort mechanically in recycling processes because of their light weight and often find their way into the ocean, where they break down into tiny microplastics that pose a major threat to marine life.

Sophomore Leah Eddy, president of Ithaca College Environmentalists, said she is happy with the switch to compostable straws. However, she said she believes the college could do a better job with other sustainable factors, like promoting the use of reusable mugs that patrons can bring to cafes themselves.

“I think straws is something that people worry about because they’re like ‘Oh save the turtles,’ … it’s kind of a poster child thing,” she said. “It should be more like ‘Don’t use throwaway plastic products’.”

“I think it’s a good step, but I feel like it’s a flagship cause,” Rivero said. “Straws make up a very small amount of the waste in the ocean, and I hope that this is the beginning of a bigger movement in abstaining from plastic and not a compromise.”

Darling said most of the feedback Dining Services has received has been positive, mainly from students who recognize the issue with straws and how they affect marine life. The biggest issue with the compostable straws is the performance of the straw, he said. He said he has received complaints about straw durability, as the straws are made out of a thick paper, and straw length because the compostable straws are too short for larger cups.

“It’s symptomatic of our culture … the ‘This needs to work for me. I don’t care about anything else,’ and sometimes you just have to say, ‘Well, there’s a bigger issue here, and we’re going to address the bigger issue,’” Darling said. “Some individuals might not like that, and we always like to keep the choice there for them, but this is a move that’s happening.”