President Tom Rochon announced the results of The Chronicle of Higher Education’s “Great Colleges to Work For” survey at the All College Meeting last Thursday, saying this was Ithaca College’s first time participating in the survey — and possibly the last.

Of the 275 colleges that participated in the Chronicle’s third annual survey, 97 were recognized as great colleges. Ithaca College was not among them. The Chronicle announced the results in July, but Rochon declined to discuss the specific results with the college until last week.

Rochon said he thought because the majority of institutions did not include hourly workers in their surveys, the comparisons between institutions in the survey were skewed.

“I decided that we should participate in the survey because I knew that there would be a lot of colleges and universities,” Rochon said earlier this week. “I thought it would be a good chance to get an external benchmark on how we’re doing as an employer. It turns out the way they organized the survey, it’s not useful for external benchmark information.”

However, Jeff Selingo ’95, editor of the Chronicle, told The Ithacan that all colleges, regardless of whether or not non-exempt workers, who are paid hourly, are included in the survey, are fairly compared. Though colleges and universities can pay extra to survey non-exempt staff, those results are not factored into the decision of who is named a great college to work for, he said.

Yesterday, when The Ithacan presented this information to Rochon, he admitted he had misunderstood the survey data. He said he thought other institutions in the survey had an advantage because they did not include non-exempt staff, but that was not the case.

“It turns out they took out our non-exempt staff for that, and Jeff Selingo clarified that for me,” he said. “It was not clear in what I read before, so it was a mistake on my part at the All College Meeting.”

Selingo said the purpose of conducting this survey is to give people looking for jobs in higher education a way to compare institutions. The reason the Chronicle does not include hourly workers in their survey is because their readership is primarily faculty and administrators, Selingo said.

“The Chronicle offers this as a service to job seekers who are typically looking for jobs in a national way, so most non-exempt positions tend to be positions that are hired locally where other positions that we survey tend to have regional or national searches,” Selingo said.

Rochon said he believes the survey should include all employees on campus, whether they are faculty, administrators or staff.

“I completely fail to understand how you conduct a survey of your workers and exclude your hourly workers,” Rochon said. “It is ethically wrong and misleading.”

When doing research for the survey program a few years ago, Selingo said he discovered colleges are unique places to work, and it is difficult to put hourly workers and faculty on the same scale because they have different professional needs.

“A place that is a good place to work for an hourly employee could be a terrible place to work for a faculty member who wants to get tenure,” he said. “Our feeling was our main readership are those involved in administration and faculty. Those are our readers, and those are the people we wanted to serve.”

The questions employees responded most positively to in the survey, Rochon said, were “I understand how my job contributes to this institution’s mission,” “I’m given the responsibility and freedom to do my job” and “I am proud to be a part of this institution,” and employees also had pride in facilities and felt secure in their workplace.

The statements employees answered most negatively on, Rochon said, were “My department has adequate faculty and staff to achieve our goals,” “Senior leadership provides a meaningful direction for this institution,” and the lowest ranking was “Issues of low performance are addressed in my department.”

Rochon said he does not intend to participate in the Chronicle’s survey again, but he said getting feedback from faculty is still important. He suggested that the college conduct its own survey as an alternative way to gauge employee satisfaction.

College employees responded negatively to the survey question regarding confidence in its college leaders. Rochon said he finds that criticism understandable based on the timing of the survey.

“At that point in time, we were deeply preoccupied with managing our way through the economic crisis and also were managing our way through the large number of freshman students we had,” he said. “IC20/20 did not yet exist. One important reason to keep doing this survey will be to find out if IC20/20 feels to faculty and staff like a clear vision for the future or if that concern is still there.”

Karenn Reeter, chair of staff council, participated in the Chronicle’s survey last spring. She said the survey came at a key time because of the state of the economy and other outside factors that had the potential to worry employees.

“Since then, there has been a lot of settling in terms of understanding how the college has been able to ride out the storm,” she said. “Our enrollment issues and budget issues that were affected very strongly by the economy — those things have settled in.”

Mark Coldren, associate vice president of human resources, said he wonders if the response from employees would be different if the survey was taken today.

“These surveys are really based on what people believe in the moment you ask them,” he said. “It is kind of like a snapshot in time. I would like to think people know where we’re going, but we won’t know until the next time we ask.”

Reeter, who has worked at the college for three years, said she likes the community atmosphere.

“I feel like it’s a great place to work,” she said. “Something that surfaced as the result of the survey was that we can do more work to increase the communication between workers and supervisors, but I think that it is not a big surprise.”

Coldren said the college is undertaking four major initiatives this year that will connect with some issues brought up by the survey, though they are not directly connected. The initiatives, which were presented at the All

Ideally, Rochon said IC20/20 will be completely drafted and given to the Board of Trustees for approval by the end of the semester.

“Everything we’re doing I believe is very ambitious,” Rochon said. “There is no precedent for anything like IC20/20 at Ithaca College. To have an ambitious plan and then to stay focused on accomplishing that plan in the years ahead will be challenging, but I think that with our inclusive process and developing plans, people will understand it and will be very effective at implementing it when the time comes.”

In a separate survey, The Ithacan analyzed the results of its own survey taken last fall, evaluating Ithaca College as an employer. 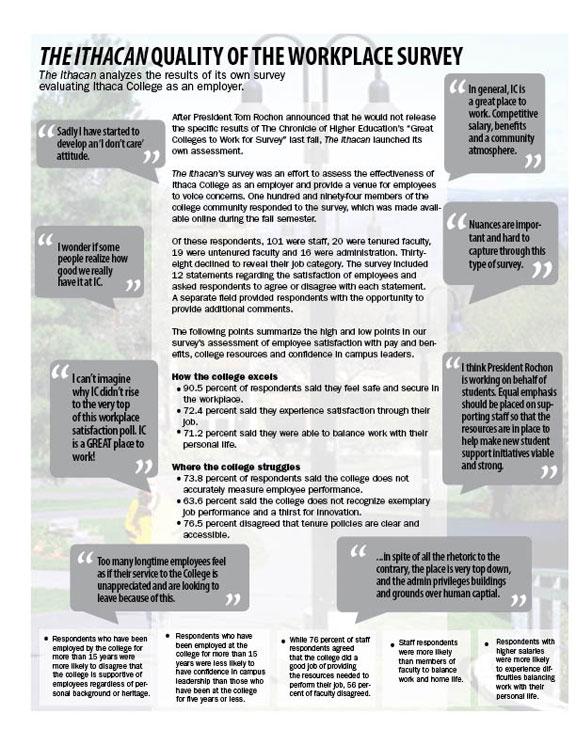