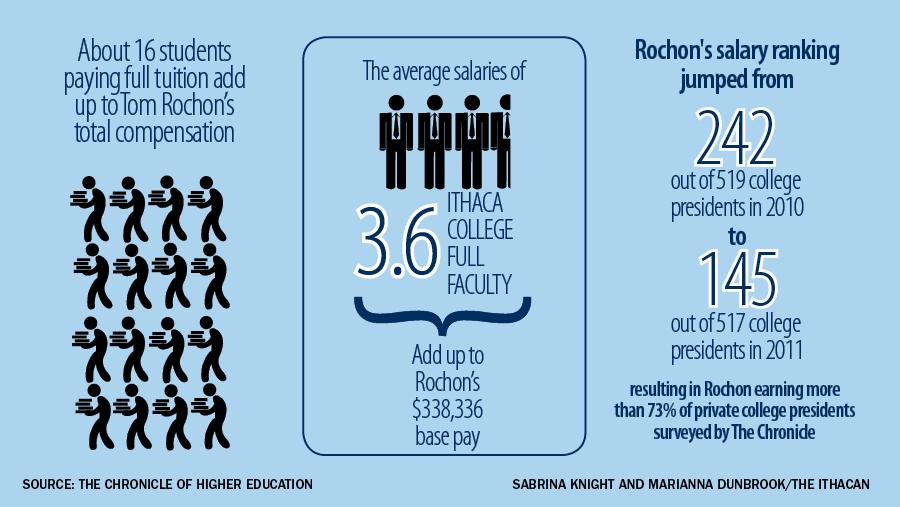 Ithaca College President Tom Rochon’s salary ranks among the highest when compared to those of presidents at similar colleges, while faculty salaries trail behind.

The college’s 990 form submitted to the Internal Revenue Service indicates Rochon’s 12.2 percent raise resulted in a total compensation of $557,053 that year. The second-highest-paid official at the college, Carl Sgrecci, former vice president of finance and administration, received $238,246. The president declined to comment on his salary.

Last August, Rochon presented an initiative called “Under 3 Over 3,” which is intended to keep the annual cost increase for students at less than 3 percent, while maintaining salary increases at a 3 percent or higher rate.

Thomas Grape, chair of the Board of Trustees, said some ranking reports can be misleading because they typically use tax numbers as opposed to actual income received.

“Sometimes there are big bumps from one year to the next, and there might be a decline in the following year,” he said. “So I take any one year with a grain of salt. It really is important to look at a longer-term picture, which is what the trustees [do].”

Nancy Pringle, vice president and general counsel of the Office of Legal Affairs, said in setting the president’s compensation, the board of trustees examines data from comparable institutions. They also evaluate the increment in salary given to employees for the year, and they assess general merit, she said. However, Pringle said the peer groups used by the board are not public.

Some administrators at the college, however, point to flaws in The Chronicle’s peer group. Eric Maguire, vice president of enrollment and communication, said religiously affiliated institutions in the group could potentially not be comparable to the college.

“I am kind of surprised to see so many religiously affiliated institutions and reverends listed there,” he said. “[They] obviously have lower salaries and have a bit of a different salary structure than most of the non-affiliated private [schools], so in that regard it was not entirely an ‘apples-to-apples’ piece.”

The Chronicle’s peer group includes five clergymen, and two of them don’t receive a salary. Ithaca College is also the largest institution in the peer group, with a student population of 6,760. The second-largest college has a 6,080 student population.

The Ithacan created an alternative peer group using institutions from the New American Colleges and Universities group to address these issues. Though the college ended its membership last year, it has often used NACU members in the past for institutional comparisons.

Pringle said the college left the group because over the years, membership has changed to include smaller institutions that are less similar to the college.

“The institutions in the NACU, they began to be smaller institutions than us, and it began to feel like we were almost in a place where we were not able to compare ourselves apples to apples,” she said.

The NACU-based peer group takes into account factors such as size, selectivity and programs offered. The new list of similar institutions only includes those that were NACU members when the college actively used the group for comparison.

Asma Barlas, professor and program director of the Center for the Study of Culture, Race, and Ethnicity, said when she first arrived to the college in 1991, the faculty were among the lowest paid in peer groups used at the time, while the president had a higher salary than the president of Cornell University. Since then, she said, there have been attempts to make things more equitable, but several public rankings, in addition to The Chronicle’s and The Ithacan’s, don’t show much progress.

“I am not sure that IC’s version of equity has worked well,” she said. “The president of the college is making an outrageous amount, even as he is leaning on the rest of the college to cut costs.”

Peter Rothbart, chair of the Faculty Council, said there are many factors to consider when comparing the college to other institutions.

“The key issue is how you define what the common value is,” he said. “Is it size of the school, does it focus on teaching versus scholarship … ? We’re considered a master’s degree school, we’re also considered a comprehensive college, that’s another group, so these things are always, always imperfect.”

As a member of the College and University Professional Association for Human Resources, the college conducts annual faculty surveys to track salary and analyze how it compares to other institutions, Mark Coldren, associate vice president of human resources, said. Two years ago, the college conducted a more extensive survey to verify whether salary adjustments were needed. The college declined to release results of the survey or to indicate what institutions were used for comparison.

“That is always the job of the college, and whether it is the provost working with the deans to try to say, ‘OK, here is what the market data says, here is what we are paying,’” Coldren said. “If we are behind, [we decide what we are] going to do about it.”

Rothbart said the survey addresses how faculty salaries should be increased.

“The president has committed to his ‘Under 3 Over 3’ plan, I believe, in an attempt to address that issue,” he said. “Whether it’ll succeed at that or not, we’ll see.”