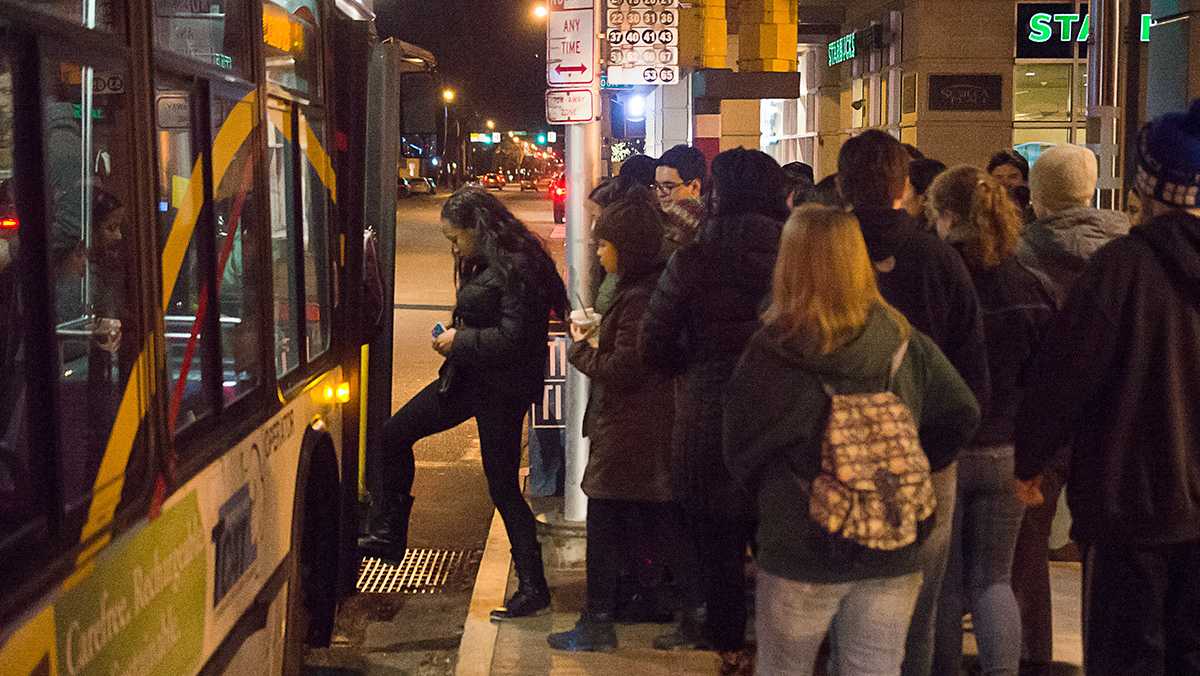 Sam Fuller/The Ithacan
Bus passengers board the TCAT headed up to Ithaca College from The Commons. Rowdy student behavior has been observed at the Towers pickup location where Ithaca College has had to employ safety measures.
By Falyn Stempler — Staff Writer
Published: March 21, 2017

Late in the evening on most Fridays, freshman Kayla Price cracks open her 10th–floor window in West Tower to feel a slight breeze as she studies. However, she said it is often difficult to focus because of the noise coming from large groups of students boarding the Tompkins Consolidated Area Transit bus.

“I’m in shock with a lot of people’s behaviors,” Price said. “Just having respect should be a given.”

This rowdiness, which had been occurring the past few months, led the college and the TCAT company to crack down on the behavior through three new initiatives: a two-bus system, where two buses arrive at each bus stop on weekend nights; barricades at the Towers bus stop; and increased Student Auxiliary Safety Patrol and campus police presence. Students were previously swarming the bus doors and overcrowding the vehicles routinely, said Michael Smith, TCAT transit service supervisor.

Smith said he contacted the college out of concern for the safety of students, nonstudent passengers and TCAT drivers. The TCAT company worked with the Student Governance Council to create these initiatives.

Usually two buses can guarantee everyone a ride, Smith said, but it is sometimes difficult to dispatch two buses because the TCAT company is understaffed.

Barricades have also been erected at the Towers bus stop so that students form a line to get on the TCAT. Additionally, Smith said increased SASP and campus police presence also have helped control the crowds.

“The crowds of students on weekend nights were becoming too large and out of control for the drivers to handle themselves, thus compromising everyone’s safety,” Adams said. “Having SASP and a Public Safety officer helps people get on the buses and where they need to go quicker and safer.”

Freshman Adriana Darcy, like Price, said the loud students outside her dorm in East Tower disrupt her studies. She said she is very frustrated because students are consistently screaming every night, throughout the night, and she has 8 a.m. classes every morning.

“Every single night, they keep me up with their screaming,” Darcy said. “They are so loud and so disrespectful. It’s constant drunk screaming until the bus comes.”

Some students express frustration that the new initiatives are punishing all students for the behavior of some students.

Freshman Alexandria Koshgarian said she usually is able to drive herself places because she has a car on campus, but the rare times she has taken the TCAT late at night, she has been disappointed by the way students behave.

“The few times I’ve ridden the TCAT, the students have been so rude,” Koshgarian said. “I completely and fully believe students who ride the TCAT should behave in a much more respectable manner.”

She said she saw students treat the drivers poorly, such as yelling very loudly while sitting up front near the driver, which upset her because the drivers are doing students a service by taking them where they need to go.

Smith said he thinks more students are using the TCAT than in the past, which has resulted in swarming of bus doors and overcrowding on the buses.

However, he said the new initiatives are steps in the right direction and that he is satisfied with the college’s response to the company’s complaints.

Sophomore Anna Gardner, vice president of campus affairs for the SGC, sent an email to the student body March 5 outlining these initiatives and asking students to improve their behavior. She said she sent the email because she wanted to introduce herself to the student body as its new vice president and reach out about this issue that many students have brought up to her at SGC meetings.

Gardner said she credits the students and the TCAT company for these initiatives because they brought this issue to the SGC. She said she urges students to reach out to her if they have more issues.

Tompkins Consolidated Area Transit could soon lose $200,000 of federal funding per year, based on a bill recently passed by the U.S.