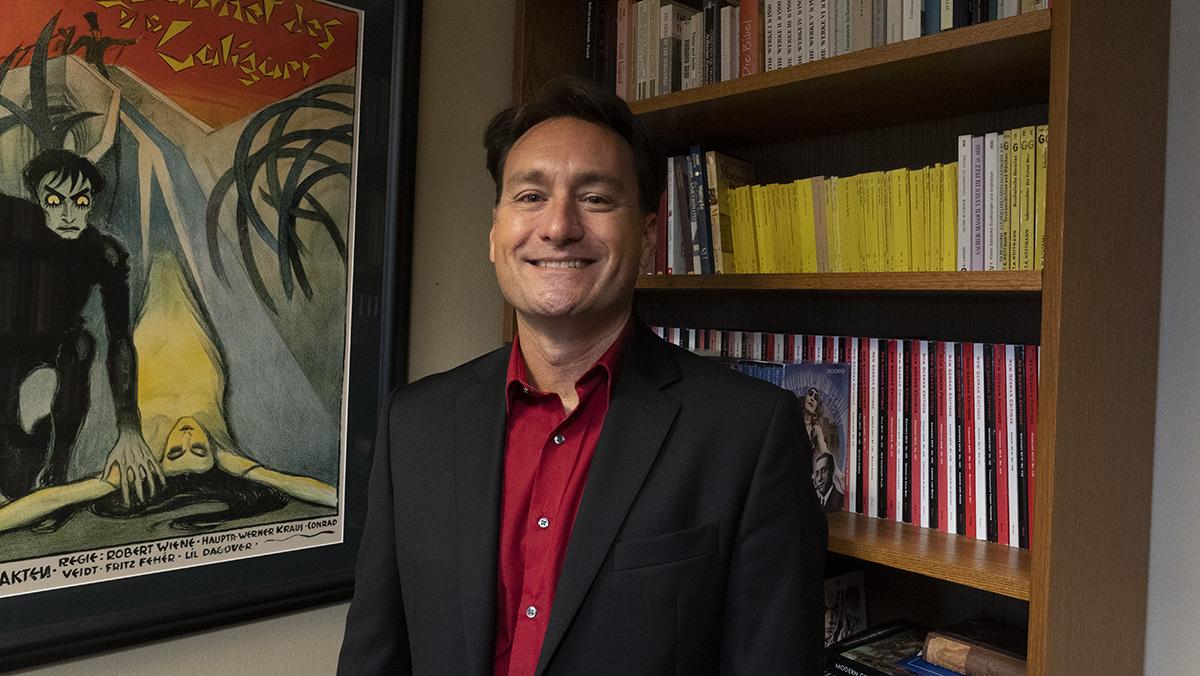 Surina Belk-Gupta/The Ithacan
Michael Richardson, director and chair of the Screen Cultures Program, said he believes that neither cinema and photography nor film, photography and visual arts -- the college’s existing film-focused majors -- provide the same insight that will be brought to light by the new program.
By Luke Haworth — Contributing Writer
Published: September 8, 2021

Some students and faculty at Ithaca College have expressed their excitement for Ithaca College’s new screen cultures B.A., which is premiering for the first time in Fall 2021.

After two years of planning and preparation, the screen cultures major is now available to all students. According to the college, the major allows students to study the moving image while allowing students to focus on specific areas and issues. The major also allows students to gain hands-on experience on and off campus by attending events like film festivals and industry-related internships.

Michael Richardson, director and chair of the Screen Cultures Program, said he believes that neither cinema and photography nor film, photography and visual arts — the college’s existing film-focused majors — provide the same insight that will be brought to light by the new program.

“We did not have a major that really encapsulated film studies in this way that this does,” he said.

Richardson said the program is looking to capture different kinds of students as the new major gains publicity. He said there are currently two students enrolled in the major.

“Certainly we were looking at capturing those students who were looking for a more flexible degree and students looking in film and screen, students who wanted to double major and wanted to take courses with a more liberal arts focus,” he said. “This would be students in not only [the Roy H. Park School of Communications], but in [the School of Humanities and Sciences] who are interested in film, but not interested in a practice-based degree.”

Richardson said the program is looking to appeal to students who are interested in working outside the field of production.

Andrew Utterson, associate professor in the Department of Media Arts, Sciences and Studies, said he believes the major’s unique perspective makes it a perfect match for the college.

“This interdisciplinary approach fits with the college’s broader goals of connecting the campus and disciplinary ideas and offering new and existing students flexibility and choice in how they navigate the liberal arts and professional perspectives – part of what makes IC so special,” he said.

Utterson said the addition of the major is not a matter of building a new legacy, but building onto an existing one.

“While the screen cultures major is brand new, many of its courses have long histories and decades of amazing alums who have used their experiences immersed in studying film to become creative producers, critical consumers and citizens who understand the power of the moving image to reflect, as well as shape the worlds in which we live,” he said. “The aim is to build on that tradition.”

Junior Queline Meadows said she changed her major over the past summer from culture and communication to screen cultures. She said having a major pre-built around her interests made the switch worth it for her.

“The fact that I was able to go and take screen studies courses as my major, rather than just a self-designed concentration, really made the change worthwhile,” Meadows said.

Meadows said she feels that faculty within the screen cultures major share more common interests with her, allowing her to make more connections with them.

“The ability to connect with the faculty in the department, while being able to make connections with people whose interests align with my own will help me further my academic career,” Meadows said.

Freshman Nick Williams said he believes the main focus of the new major goes further than studying films through the eye of different spectacles; instead it explores how film encaptures its surroundings and acts as a means of connecting cultures.

“It studies how audiences have been changed and influenced by film as a trope and as a method of communicating,” Williams said.

Williams said he believes it is important for people to see the impacts of film in society.

“It’s worth looking at how we as individuals growing up in one culture incorporate other cinemas into our being,” he said.

Williams said he was originally accepted to the college as an English major but changed his major before the start of the fall semester.

“I was completely enchanted by it,” he said. “The fact that it loops in film as an art form with the rhetorical and the analytical views that we need as writers but [also] looping that in with sociological aspects, and looking at it as not just an art that we indulge ourselves in as an activity, but it is something that evolves as time and technology go on. I think it’s beautiful how film has impacted different cultures in varying degrees across the cultures.”