The Ithaca Sciencenter switched to 100 percent wind-generated power last month, making it the first facility in Tompkins County to get electricity exclusively from wind power, according to Hester Vermaak, public relations manager for the center. 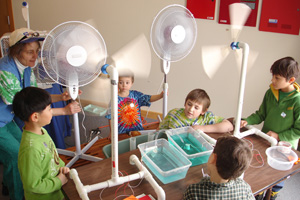 “The Sciencenter felt strongly that we wanted to show leadership on this issue and reduce our carbon footprint,” Vermaak said.

According to New York State Electric and Gas (NYSEG), the major energy provider in the area, 9,300 NYSEG customers have signed up to buy wind power since the program started in August 2002.

The wind power being used by the Sciencenter is provided by a partnership between Community Energy and NYSEG. The wind is generated at the Fenner wind farm in Madison County, the Weathersfield Wind Farm in Lewis County and the Waymart Wind Farm in northeastern Pennsylvania.

Paul Copleman, the public relations manager for Community Energy, said the company’s relationship with NYSEG is one of many similar partnerships across the country.

Customers pay an extra $2 to $2.50 more per month for every 100 kilowatt-hours of renewable energy they are purchasing, Copleman said.

Vermaak said replacing conventional electricity with wind-generated power will prevent 153 tons of carbon dioxide from being released into the atmosphere. This move to wind power is the equivalent of planting 22,113 trees, or driving 281,914 fewer miles every year, he said.

Ithaca College junior Steve Figgatt, an environmental studies major with a concentration in sustainability, has worked on a number of sustainable projects on campus and in the community. One of his projects includes a proposal to build a small wind turbine on top of the college’s Center for Natural Sciences, he said, which is a smaller version of the turbine powering the Sciencenter.

“Wind blows which spins the turbine. The turbine has a generator inside, which is a bunch of magnets around a coil of wire,” Figgatt said. “[This] generates electricity that you can pump straight into the grid.”

Buying wind-generated power is seen as an investment by the Sciencenter, Vermaak said, because the center hopes it will help drive a community demand to eventually make wind power even more affordable.

“It’s more expensive, but it’s important for us to move ahead,” he said.