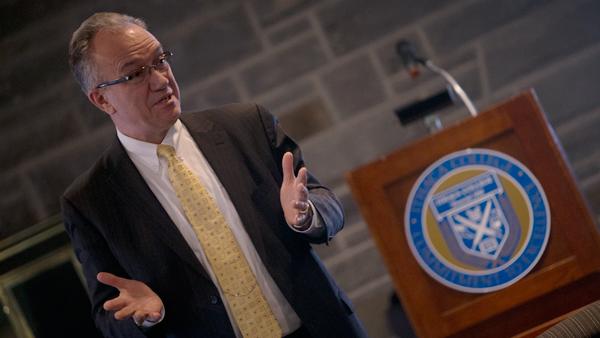 Durst Breneiser/The Ithacan
John Richmond, a director at the University of Nebraska-Lincoln, is the second candidate in the music dean search. He discussed issues in the arts with a group of about 20 people Monday in Clark Lounge.
By Sage Daugherty — Staff Writer
Published: February 7, 2013

The second finalist for the position of the dean of the School of Music visited campus Monday and spoke about an innovative, technology-based music program that reaches a wider range of high school students than traditional music education.

John Richmond, a director at the University of Nebraska-Lincoln, spoke about important issues and crises in the arts and specifically why Ithaca College should be concerned about them. Speaking to a group of about 20 people in Clark Lounge, he focused on the issue of the decreasing number of music education teachers and programs in secondary schools across the country and ways to counteract the trend.

John Sigg, associate dean of the School of Health Sciences and Human Performance and chair of the search committee, said Marisa Kelly, provost and vice president of education affairs, will hire the new dean with input from the committee, and the decision will be announced next month.

“I’m encouraged by the strength of the candidates and again, that reflects back on the quality of the program and the people who apply for the job,” Sigg said.

Richmond said he thought about music in public schools and how music becomes an elective and less of a priority as students progress through high school. He said the assumption is school-age children become less interested in music over time.
However, Richmond said this is not the case.

“Moving from the primary years to the adolescent years, music, if anything, gains importance in stature and in identity formation,” Richmond said. “People begin to identify themselves by virtue of the musical cultures in which they run.”

New technology can provide alternative music experiences to high school students, Richmond said, and he wants to encourage a cohort of students to utilize technology to supplement their music education in schools. By using applications like GarageBand and other computer-facilitated music learning techniques, Richmond said students are using resources in environments they already know.

“I think there is an opportunity for us to continue to preserve and honor and expand the rich musical traditions that have been a part of our normal footprint while trying new, experimental ways of growing the footprint in the K-12, if you will, feeder program, and then in our own curricula,” Richmond said.

“It was a very good presentation,” Titlebaum said. “He’s clearly very intelligent, very thoughtful, very passionate about music and the state of music in education, both in secondary schools and higher education. He clearly has an interest in both music in the institution as well fundraising for the institution.”

Richmond said he sees the position as a new opportunity to effect institutional change.

“It begins with what a remarkable place this place has been and is today and what its future I believe is likely to be, which is very bright and exciting and promising,” Richmond said. “There are few schools that enjoy that kind of halo and institutional eminence in music that Ithaca College does.”