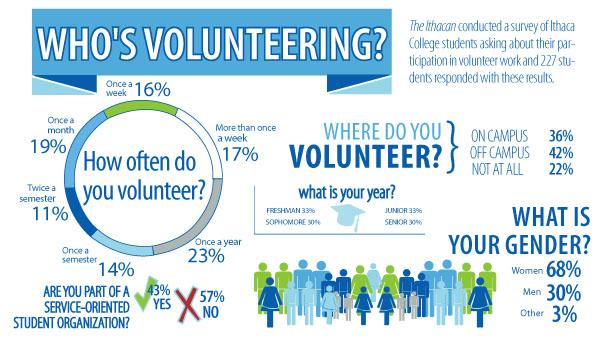 What began as a goal for the end of the academic year turned into a reality March 24, when senior Jenny Barish discovered that the Class of 2014 had surpassed its goal of logging more than 2,014 volunteer hours.

Barish, director of finance for the Senior Class Executive Board, serves as one of the leaders of the Give Back Committee, a governing body of elected seniors within the Senior Class Cabinet that works with service groups and nonprofit organizations to give back to the Ithaca community. Barish proposed the idea of promoting volunteering at the beginning of the academic year. When the initiative began near the end of November of last year, Barish said the committee had no idea that it would reach its target.

Barish said the Senior Class Cabinet was designed to ensure every graduating class has a memorable last year.

Though some were skeptical of the goal, Barish said the Give Back Committee was confident in the Class of 2014, as many seniors were already actively involved in the community. She said the many contributions are proof that students are giving back to the Ithaca and campus community.

“I had no idea how many people were already committed to service, and it was just so amazing to see all the hours come in,” Barish said.

Don Austin, an assistant director of community service and leadership development in the Office of Student Engagement and Multicultural Affairs, said this project goes to show that Ithaca College students want to give their time, energy and skills to the community.

Students began submitting hours as soon as the project was announced. By the end of the fall semester, seniors were already halfway to the goal. For some seniors, logging the hours was just a formality for tracking the service they already do in the community, Barish said.

For example, senior Ashley McGinnes has been volunteering with the One-to-One Big Brothers Big Sisters program through the Ithaca Youth Bureau since her sophomore year. Since then, she has dedicated much of her time to the program, putting in eight hours a month. McGinnes said she thinks it is important to spend her free time giving back to the community that has given so much to her. 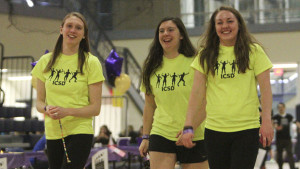 “I don’t think of it as community service anymore,” McGinnes said. “It’s just hanging out with my little sister.”

Barish said the biggest contribution of hours was from habitual volunteers, like McGinnes, who said she has been a longtime volunteer, doing community service since high school with her church.

The Give Back Committee began the project by reaching out to organizations that would be willing to partner with the Class of 2014. It then sent a survey to all the seniors asking them to provide their availability and declare which partner each student would be interested in working with, if they chose to do so. Barish said 97 seniors filled out the optional, initial survey, and 172 students have logged hours so far, with the contributions growing daily. The survey was created to help connect students to organizations. Some students were already committed and didn’t fill out the survey but still submitted hours.

Students have had the option to volunteer at several local organizations including Big Brothers Big Sisters, OSEMA’s Service Saturdays, Habitat for Humanity, the Tompkins County Public Library and more.

Claire Dehm is a Senior Class Cabinet member as part of the Give Back Committee. Agreeing with Barish and McGinnes, Dehm said giving back to Ithaca is an essential part of the college experience.

Austin said seniors see this project as their last chance to do something meaningful for the Ithaca community.

“I think it’s important because Ithaca is the community we’ve been living in for the past four years, and it has given so much to us between education, extracurricular activities and just in general,” Dehm said.

Barish said she hopes to see this project have an impact on not only future senior classes but also the underclassmen. By having the underclassmen involved and by making this an institutionalized project, Barish said students can unify and find motivation to do service.

“My vision is really to have this become a part of the college culture,” Barish said.

As of this year, there are both junior and sophomore class councils that serve the same purpose as the Senior Class. Though Barish said she hasn’t been working directly with the councils, the Senior Class’s transition materials will suggest more collaboration in the years to come. Barish said she would like to see each future class strive for a higher number of community service hours and ultimately try to exceed the number of hours performed the previous year.

Austin said measuring the hours and accomplishing their goal is a battle cry for the Class of 2014. He said it shows the college and the community that students are actively doing service and that the records are “nothing short of spectacular.”

McGinnes said she hopes the Class of 2014 will have an influence over the underclassmen, but she is already impressed by the students she has met in each grade so far, including the underclassmen. She sees the senior class’s accomplishment as making an important statement about the caliber of students at the college.

“I think that number of 2,014 means we’re grateful and we’re well-rounded individuals who understand the importance of community and giving back to a community that has given us so much already,” McGinnes said.