Senior finds her passion in helping other students 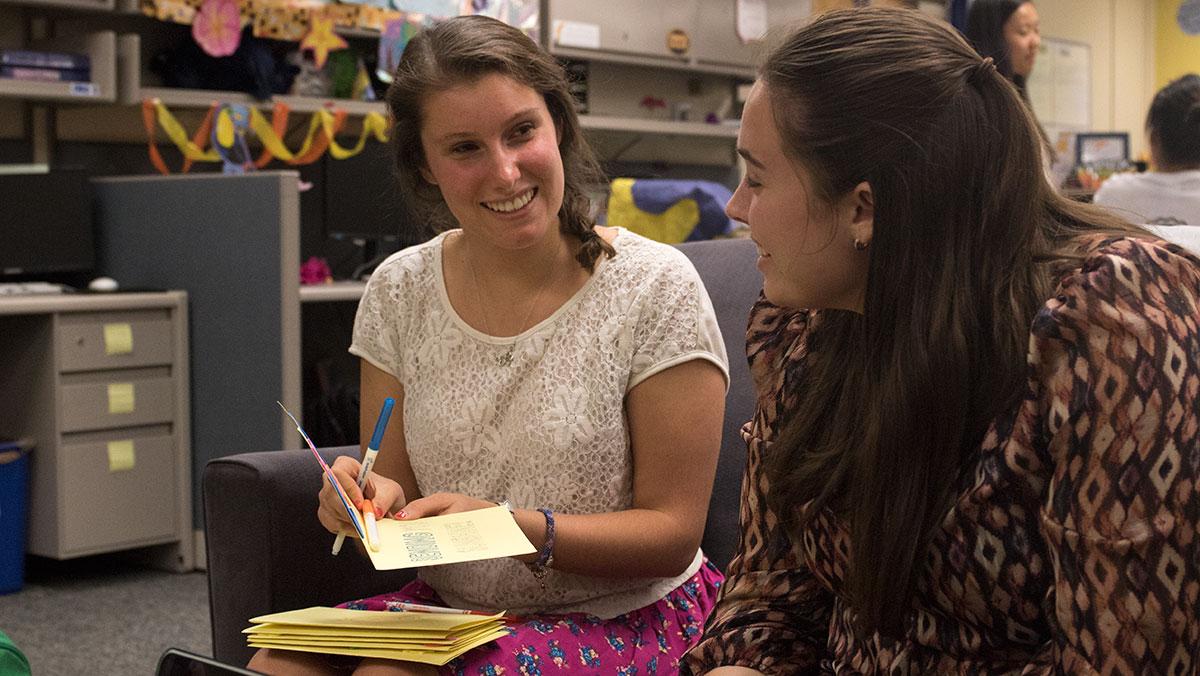 Karielle Williams/The Ithacan
Senior Lisa Famularo works with sophomore Kayli McGlynn in the Student Activities Center. Famularo said she would like to pursue a career in student services on a college campus.
By Daniel Hart — Staff Writer
Published: October 21, 2015

Between her two jobs and multiple extracurricular activities, Ithaca College senior Lisa Famularo is always busy. But to her, it’s for a good cause.

Famularo received the Campus Commitment Award from the Student Government Association on Oct. 2 for her outstanding contributions to the campus.

“I know a lot of the people on campus that I work with or that I know, or a lot of the underclassmen that I’ve mentored as an orientation leader or just one-on-one at various times tell me, ‘You’re a great campus resource. I come to you when I have any questions,’ things like that,” Famularo said. “So just hearing that that is recognizable enough to get an award was really cool.”

Kyle Stewart, SGA vice president of communications, said Famularo was the clear choice for the award.

“Her dedication to a variety of organizations that improve the college made her stand out for the award this year,” he said.

Famularo works two paid jobs, as a student leadership consultant in the Office of Student Engagement and Multicultural Affairs and as a teaching assistant in the School of Business.

In addition, she volunteers as a peer career adviser in the Office of Career Services, works with the Senior Class Cabinet, is the student vice president of the Honor Society of Phi Kappa Phi, is the assistant director of IC Project Sunshine and is the co-chair of the School of Business Dean’s Hosts Organization.

Famularo said being on the executive board for IC Project Sunshine, which she has been involved with since her freshman year, is the most rewarding role. IC Project Sunshine is a chapter of a national nonprofit that focuses on helping children in medical facilities and their families regain a sense of normalcy.

Sophomore Elena Haskins, who works with Famularo in OSEMA and Career Services, said Famularo is her role model.

“She juggles more activities than three students combined and succeeds in each at the highest level,” Haskins said. “She treats every task as if they are the most important thing. No matter how big or small, she gets it completed. She never complains about her workload and is a positive force to everyone around her.”

Famularo, now a business administration major, said she originally didn’t know what she wanted her major to be. However, she said she did know she wanted to immediately get involved on campus.

During her freshman year, Famularo served as the student admission representative for the School of Humanities and Sciences.

After her freshman year, she mentored students as an orientation leader, working with eight groups of 30 incoming students.

“It was kind of our challenge to connect with as many [students] as possible and show them what resources we used, things that we thought would help them. I made a few really strong, lasting connections that I kept throughout the school year,” she said. “That’s when I realized that was something that I really loved to do, and I wanted to keep doing.”

Famularo grew up on Long Island and said she credits her schooling at Herricks High School in New Hyde Park, New York, for being a major influence on her value of community involvement.

“Growing up, all throughout my school district I was really encouraged to get involved outside of the classroom, and I kind of brought that mindset with me to IC,” she said.

In high school, Famularo was a member of the Distributive Education Clubs of America, an organization that prepares students for careers in business. She was the co-president of Tri-M, the national music honor society; president of the Chamber Orchestra; a member of the Metropolitan Youth Orchestra for four years; an active member of the Dance Theatre Club; and a varsity athlete in soccer and track and field.

Junior Olivia Sod, who works with Famularo in Career Services, said Famularo has had a positive impact on her.

“It’s not her job to go out and do as much as she can to help the people on this campus,” Sod said. “She just does that on her own. She is able to juggle everything she is doing just to make this campus better for everyone that goes here, just because she wants to. She’s always helping me like a big sister.”

Famularo said she enjoys hearing positive feedback from members of the community, especially when students tell her they appreciate an idea she has or call her the most helpful resource they’ve spoken to on campus.

“It’s just really great to see that I’m actually making a difference in their college experience,” she said.

Following graduation, Famularo said, she aims to turn her passion for helping students into a career in student services on a college campus. She said she is planning on attending a graduate program for higher education and student affairs to work with students directly on a college campus in the future.

“I want to continue my love of helping students and giving back to the campus communities because it’s not always easy without a mentor or without somebody there to guide you,” she said.