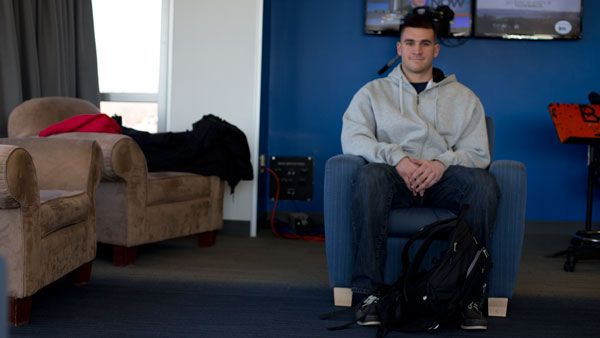 Tucker Mitchell/The Ithacan
Joe Portsmouth, a sport management major, is graduating a year early this May, having interned with the Baltimore Ravens and the Cornell University men's basketball team.
By Noreyana Fernando — Staff Writer
Published: April 30, 2014

Senior Joe Portsmouth, a sport management major at Ithaca College, grew up with a love of sports that has translated into career-launching internships in the field. After graduation, he will go on to pursue a master’s degree in business administration this year — but sports will continue to be the front-runner.

Graduating a year early this spring after an internship with the Baltimore Ravens last summer and the Cornell University men’s basketball team this year, Portsmouth has a GPA of 3.93 and was recently accepted into Northeastern University’s MBA program.

Portsmouth, who is from White Plains, N.Y., entered the college as a sport media major. However, he said a negative writing experience with student media indicated this was not his calling. He then switched to sport management his second semester freshman year.

“I have really enjoyed the last couple of years, and as a result, now I am going to graduate school to get my MBA and concentrate more on business,” he said.

Though he does not play a sport at the college, last summer, Portsmouth interned with the Baltimore Ravens, where he and six other interns were responsible for directing fans who came to watch the football team practice. During his internship, he also interacted with some of the players while coordinating autograph signings for the fans.

Portsmouth also interned with the Cornell men’s basketball team from the fall until March, when the season ended. He said he held administrative duties including filming games, keeping the scoreboard and helping out with practice drills.

Dave Metzendorf ’13 — special assistant to Bill Courtney, head coach of the Cornell basketball team — was Portsmouth’s supervisor during this internship. He said although Portsmouth did not talk much, he always had purpose in his speech and was a hard worker.

“Joe Portsmouth’s work ethic is off the charts,” Metzendorf said.

Metzendorf also said Cornell basketball legend Jeff Foote tweeted in January thanking Portsmouth for helping him with basketball drills to get back in shape for the NBA Development League game, while Foote was recovering from back surgery.

Portsmouth said he remembers Foote being very grateful for rebounding for him — one of the drills he helped Foote practice during training.

“He was very appreciative for me coming down because he knew that I was there and I had a lot of office work to do,” Portsmouth said.

Equipped with three years of experience and a passion for sports, Portsmouth said the person at Ithaca College who most inspired and helped him was his adviser, Annemarie Farrell, associate professor and chair of the Department of Sport Management and Media. Portsmouth said she has helped him in securing and searching for these internships and job opportunities.

Farrell said via email the first thing that struck her about Portsmouth when she met him was his quiet nature, and she learned with time that he was reliable and well respected by his peers. She said when job recruiters at Cornell University came to her looking for an intern, she immediately thought of Portsmouth.

“He is a wonderful representative of the college, and I can’t wait to see him succeed in the future,” she said. “After his first day at Cornell basketball, I received a call later that day that Joe was in the parking lot at 6 a.m., dressed very professionally waiting for the gym session to open up for early morning practice. They relayed to me they never had an intern show up 20 minutes early, sitting in the parking lot, ready to go.”

Recalling other noteworthy incidents from his three years of college, Portsmouth said his fondest memories come from friendships.

“If you look at [college] as if you are paying for just classes, I think you are going to look negatively at what you are getting from the experience,” he said. “But if you look at all the life experiences and the fun experiences that you do with your friends and all the people that you meet — the more you learn about life.”

Portsmouth will be the first person in his family to graduate with a master’s degree. With a passion for sports and personal relationships, he said, he is graduating from the college with few regrets. He said his game plan is to have the right balance between work and play.