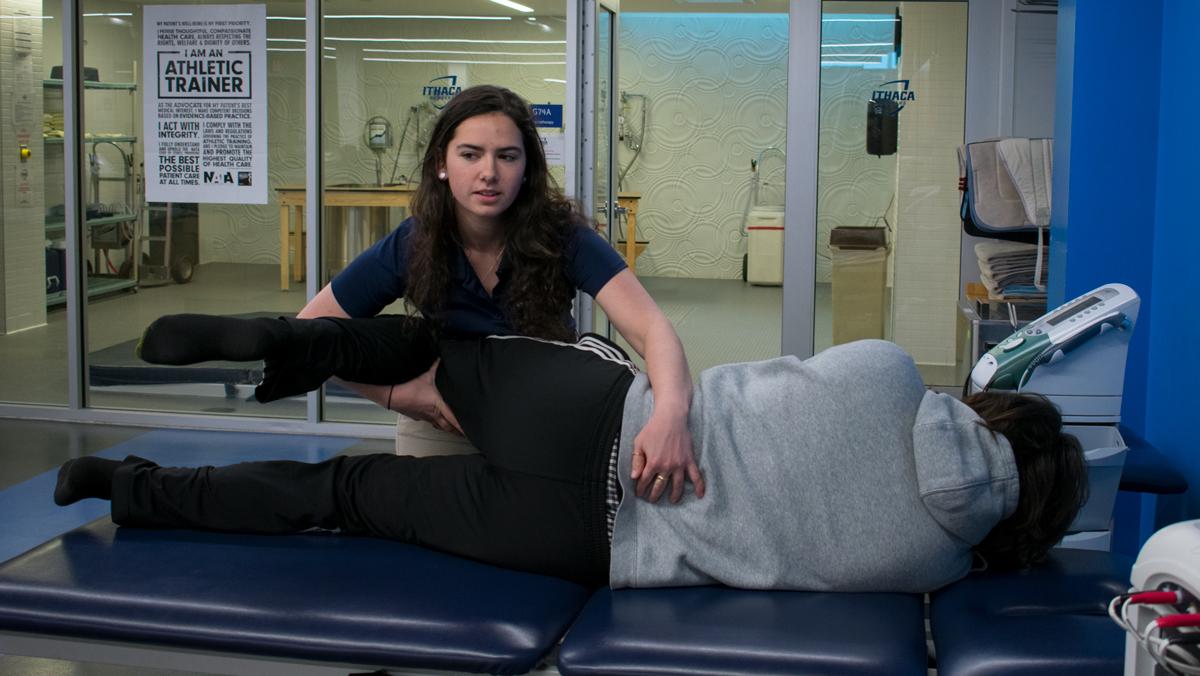 During her time at Ithaca College, senior Hannah Robison, an athletic training major, has integrated her interests to contribute to award-winning research projects and has participated in several organizations on campus, but she said her biggest success has been staying in school.

Robison was a part of the college’s volleyball team her freshman year but suffered an injury in her shoulder that took her out of the sport. She said that the injury not only took away her identity as an athlete but also made writing and studying very difficult her sophomore year, due to chronic pain. There was a point when she thought she would have to withdraw from school, Robison said, but she made the decision to persist and move forward with her education.

Robison is originally from Morgantown, West Virginia. Robison was attracted to the college’s athletic training major after looking at the classes she would be required to take, such as Techniques and Treatment of the Spine, Clinical Pathoanatomy and Therapeutic Intervention in Athletic Training. Robison said these courses were her favorites because they tied together all she has learned in the major and helped her develop advanced clinical techniques.

As part of the athletic training major, Robison has been assigned to work with different sports teams to gain clinical experience. She worked with the Cornell University men’s soccer team in Fall 2017 and the Ithaca College softball team in Spring 2018. Robison said she attends practices and home games and regularly meets with athletes to diagnose and treat injuries.

“There’s no better feeling than when an athlete tells me they got better because of something I did,” Robison said. “It’s so much fun to get the feedback that what I learn in the classroom is translating to the clinic.”

Senior Victoria Voorhees, a classmate and friend of Robison’s, said that Robison cares about her growth in the classroom.

“As a student, she cares tremendously about thoroughly understanding class material,” Voorhees said. “Not only is she genuinely interested, but she wants to know how to better her athletic training practices.”

During her time at the college, Robison has been a part of two research projects, both of which were recently awarded the Outstanding Research Award at the 21st Annual James J. Whalen Academic Symposium. Robison worked on an oral presentation titled “The Risk of Nonmedical Prescription Opioid Use in High School Athletes: A Critically Appraised Topic” and a poster presentation titled “The Relationship Between Dorsiflexion and Single Limb Balance.” Robison utilized this research to combine her interests with public health and athletic training.

The oral presentation was a project Robison completed with Jennifer McKeon, assistant professor in the Department of Exercise and Sport Sciences. The study was a systematic review, looking into whether participating in high school sports increased or decreased the risk of non-medical prescription opioid misuse, Robison said.

Robison’s poster presentation was a human-based research study she worked on with junior Natalie Sharpe. Their research investigated whether or not less dorsiflexion affected a subject’s balance performance. Dorsiflexion is essentially the bending of the ankle, Robison said.

She loves the athletic training profession and has expressed that passion to those around her, Patrick McKeon, associate professor in the Department of Exercise and Sport Sciences, said.

“Hannah is one of the most dedicated students with whom I’ve had the pleasure to work with at any level of higher education,” McKeon said. “She strives to enhance her knowledge and skills through her own spirit of inquiry with a strong desire to benefit those around her.”

Robison has also had an interest in politics from a young age, taking inspiration from her mother, who served from 2001 to 2012 as an At-Large Representative for the city council of Cary, North Carolina

“I think politics, policy and legislation are the way things get done on a national and global level, so it is incredibly important to know how the system works,” Robison said.

Paul Geisler, associate professor and program director in the Department of Exercise and Sport Sciences, said Robison’s research was just one of the ways she found connections between all her interests.

“Hannah organically found multiple openings to use her political acumen to inform her athletic training studies and practice,” Geisler said.

Aside from her classwork, Robison is a part of a number of organizations on campus, including the Ithaca College Model United Nations team, which serves as an outlet for her interest in politics. Robinson joined the team her freshman year and has since served as head delegate her junior year and traveled with the team all over the world, from Montreal, Canada, to Brussels, Belgium. Robison said some of her fondest memories of the college are from being on the team.

“I have some of my favorite people going to these conferences with me and talking about political issues,” Robison said. “It sounds nerdy, but it’s a lot of fun.”

She is a member of Ithaca College Challah for Hunger, an organization that sells Challah bread weekly and donates the profits to food justice groups, such as the Food Bank of the Southern Tier and MAZON. She is also a member of EquAT, an organization sponsored by the athletic training program that pushes to increase social awareness and cultural competency within athletic training.

Robison will be attending Indiana University in August to work toward a Master of Science in Kinesiology with an emphasis in athletic training. She hopes to one day pursue a career as an athletic trainer.