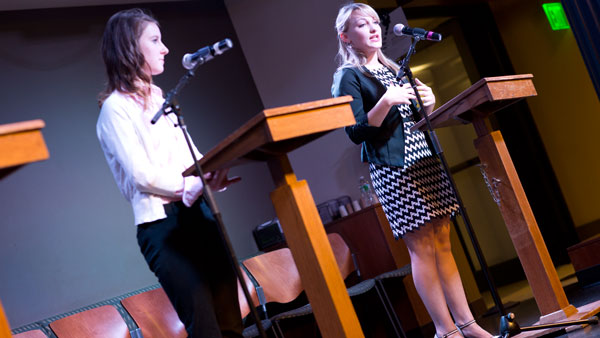 Durst Breneiser/The Ithacan
From left, freshman Rachel Roizin-Prior and freshman Kaitlin Logsdon discuss what they hope to do as class of 2017 senators.
By Jack Curran — Online News Editor
Published: September 18, 2013

Candidates for the Ithaca College Student Government Association and the newly formed class council positions presented their plans for change on campus to the student body on Monday evening in IC Square.

This fall, there are nine open positions, with one transfer senator, five student-at-large senators, a newly created varsity sports senator and two Class of 2017 senators. The club sports senator, music school senator, international student senator and off-campus senator positions are also open but have no candidates. Elections will be held Sept. 23-25 online at IC Link, and results will be posted Sept. 26.

Cedrick Michael-Simmons, president of the SGA, said he was excited to see the large number of students competing for these positions.

“The fact that we had so much competition for the student-at-large and Class of 2017 positions shows that we’re definitely in the right track in terms of expanding what SGA does and why they should be a part of it,” Simmons said.

At the event, 20 students pitched their platform ideas to an audience of about 40 people. Communication among student and administrative groups was a common theme. Many candidates discussed problems they have seen on campus and how they planned to improve the college.

Sophomore Jamila Carter, a student-at-large candidate, said the college needs to create a better sense of collaboration among students.

Other topics brought up several times were the Integrative Core Curriculum for first-year students, dining hall hours and the quality of the campus Wi-Fi.

Freshman Melinda Carmichael, another student-at-large candidate, addressed credit rollover. Carmichael said, because tuition covers the cost of 18 credits, unused credits should roll over into other semesters.

During the portion of the student-at-large presentations when audience members were permitted to ask questions, Simmons asked the candidates about their plans to improve the SGA’s outreach to the campus. Simmons said reaching out to students is one of the biggest goals of the SGA.

“It’s our job as senators to be involved in the community,” Simmons said. “We’re trying to come up with a systematic way to make sure our senators are being a part of committees, but also being present in the community and going to events. The reality is that SGA does allocate funding for different events, so it’s kind of our job to be present at them.”

Sophomore Kyle James, another student-at-large candidate, said he wants to send the SGA members to student organizations to promote interest in campus politics.

Candidates also discussed what they called the divide between schools in the college. Sophomore Renee Schweizer, a candidate for sophomore class council vice president, said she wants to create more connections among the five schools.

“What’s important here is that I want our class to evolve into a community,” she said. “There’s minimal interaction between the different schools … and I would like to see a change.”

Many of the candidates emphasized the importance of listening to ideas and feedback from students. Freshman Kaitlin Logsdon, a Class of 2017 candidate, said she hopes to give a voice to all members of the freshman class.