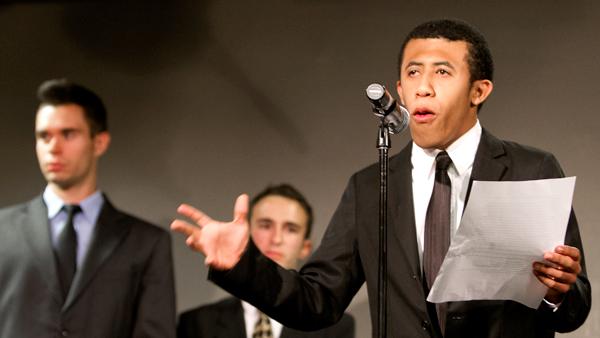 Durst Breneiser/The Ithacan
Elijah Breton makes the case for why he should be representative for the freshman class at the SGA Platforms Monday evening.
By Emily Masters — Contributing Writer
Published: September 19, 2012

Candidates for the fall Student Government Association elections presented an array of ideas on how to improve Ithaca College to a small audience at the SGA Platform Presentations at 7 p.m. Monday in IC Square.

Elections will begin at noon Friday and end at noon Saturday. The platforms included the eight candidates’ prior experience and their plans if elected. Candidates’ platforms varied, but some included addressing students’ issues with the Wi-Fi service on campus, reducing parking costs, streamlining website issues and making the college tobacco free.About one sixth of the college community votes in elections, Rob Flaherty, current president of SGA, said, and the turnout in the fall is usually low because fewer people are running than in the spring, when the executive board campaigns. Flaherty also said that they picked IC Square as the location for the presentations because it is a high-traffic area on campus.

There are two students running for the transfer senator position. Juniors Katelyn Madison and Colin Covitz transferred to the college this year and spoke at the platform night.

Madison said transfer students are often treated as freshmen, so she would work to enrich the transfer experience and have more students transfer to the college.

Colin Covitz, an air force cadet at Cornell’s ROTC, transferred to the college from SUNY-Delphi, a move he found was not as simple as he expected.

Monique Peterkin is running for the position of senior senator. While she is only beginning her second year at the college, Peterkin is officially an academic senior because of the opportunity she had at her high school to graduate with 60 college credits.

One of her goals as senator would be to change the rules for catered campus events to make events more affordable. The school policy is that the Office of Conference and Event Services must accommodate all catered events on campus, which is significantly more expensive than outside services, Peterkin said.

There are five freshman candidates for the four open class of 2016 senator positions. Liz Pellegrino, Dominick Recckio, Elijah Breton, Sean Themea, and Attila Mendli all spoke at the platform presentations.

Pellegrino acted as student council president in high school and said she would strive to have freshmen take part in leadership.

Breton petitioned to change his high school’s valedictorian policy, working for three years until the policy was changed. Breton’s goals, if elected, include having a tobacco-free campus, improving campus Wi-Fi, acquiring free cable in the dorms  and lowering parking pass fees.

Thema, who is a Martin Luther King Jr. Scholar, said he would work to donate unused dining hall food to the local food banks. He would also work to “clean up the clutter” of HomerConnect, Sakai and the other sites the school uses, and to improve resident Wi-Fi.

Mendli participated in SGA in his high school in Hungary. He said as senator his goals would include getting hand sanitizer in the dining halls, more quality and healthy foods, free bike rentals at dorms and compostable trash bins in dorms. These ideas came from the freshmen he spoke with about the campaign, Mendli said.

Recckio, who led his high school SGA for three years, said he would create a freshman advisory board to keep in contact with his constituency. He also plans to work with the First Year Experience to create more events and encourage all freshmen to volunteer.

Many of the candidates expressed concern over the few people in attendance at the platform presentations.

“Can I just say, there are not a lot of people here. I feel like there should be a lot of people at student government events,” Pellegrino said at the end of her speech. The comment was met with chuckles and also head nods.

Recckio also noticed the number of students in attendance.

“I was really disappointed with the attendance,” Recckio said. “In the future SGA should market this event better, so all students will know who they are voting for.”

“I’m not sure what more we can do,” Brown said. Flaherty said it is usually difficult to get students to come to events such as these, especially on weeknights.

Students will receive an email with directions on how to vote online. There will also be a voting booth in Campus Center for convenience. Students vote for representatives for their year only, Flaherty said.

Many of the candidates have decided to use social media, including Facebook and Twitter, to campaign. Thema and Recckio posted on the Class of 2016 Facebook group about the election.

“The best way to reach all of the freshmen is Facebook,” said Recckio. “That is why I am attempting to send each and every one of the freshmen a message with how to vote and my platform.”

Correction: In an earlier version of this story Monique Peterkin was referred to as a sophomore. Peterkin is a second-year student, but recognized as a senior.